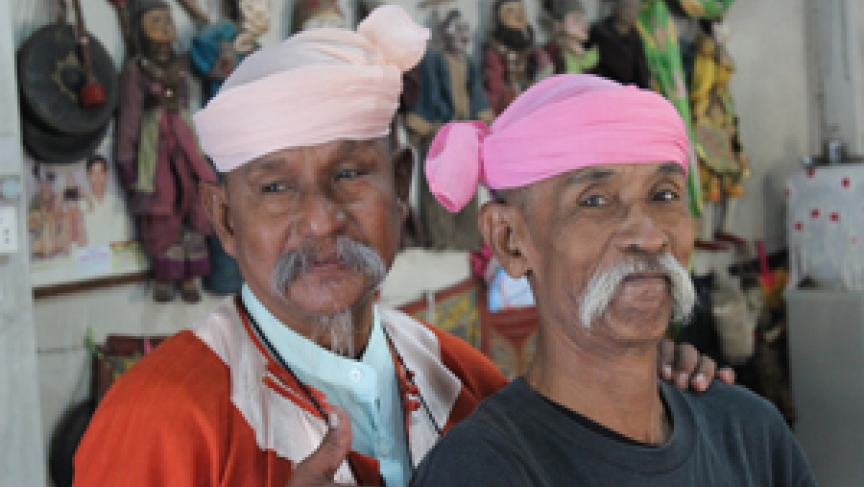 Guidebooks will tell you that Mandalay in central Myanmar is the country's cultural heart. It was the capital in pre-colonial times. Today it's modernized and traffic-clogged, but is still home to scads of performers and artisans and museums and monasteries.

We wanted to see how the changes happening elsewhere in Myanmar, also known as Burma, are registering in its cultural capital.

We started with a visit to comedian Lu Maw. We met him at his home and performance space. He's part of a semi-legendary comedy and dance group called The Moustache Brothers.

He told us about a funny thing that happened during Barack Obama's historic visit to Myanmar in November. Obama, a Myanmar military general, and Lu Maw were in a helicopter, and the president, get this, he starts throwing money down to crowds waiting on the ground.

So the general sees how happy the people on the ground are, and he asks Lu Maw how he can make them happy. Lu Maw says simple, he could just throw himself out of the helicopter. "Joking!" Lu Maw says, cracking a huge grin.

That gag may sound a little harsh, but jokes like this have been a standard part of The Moustache Brothers' act for a while. Lu Maw's brother Par Par Lay, speaking Burmese, tells us one from back in the early days. It features Ne Win, the military general who seized power in 1962, ushered in a repressive regime and, soon after, runaway inflation.

You might be thinking, "Wait, they made fun of a repressive military regime…in public?" Their show, which used to tour throughout the country, mixes barbed commentary with more traditional dancing and puppetry. And their words have landed them in hot water. Par Par Lay has been thrown in jail three times, once for seven years. They're not getting locked up now, but they're still only supposed to do shows in the performance space on the ground floor of their house. They may have broken that rule once or twice.

Lu Maw thinks Myanmar is a bit freer these days, and he puts great hope in the fact that Aung San Suu Kyi now has a seat in parliament. But change is slow. He describes it like this: the military generals who ruled the country for so long have taken off their uniforms, but they haven't thrown them away–they can put them back on at any time. "Half I believe; half I don't," Lu Maw says, laughing. "Half trust; half not trust."

The Moustache Brothers are along what some call Mandalay's "West End," an area sprinkled with small arts venues. While we talk, a traditional Burmese orchestra is warming up next door. Realizing we're not going to beat them, we join them.

The eight-member orchestra hammers out their theme song on a bunch of traditional instruments– tuned skin and brass drums, a bamboo block, a reedy woodwind.

If Yan Naing had his way, there'd also be space in Mandalay's cultural scene for some less traditional material. He started DJ'ing 10 years ago–first hip hop and then dirty dutch and deep house. He says that, by 2006, Mandalay actually had a bit of a club scene. Two hotel lounges had DJs most nights of the week, and he was making a living playing music.

All that stopped two years ago when authorities cracked down and stopped issuing club permits. While Myanmar takes fitful steps forward in some areas, Yan Naing sees the crackdown as a sign of a culture that's still pretty conservative. The official reason was that fights had broken out at clubs, but he thinks these clubs just didn't sit well in tradition-bound Mandalay.

Through a translator, Yan Naing says he misses spinning records for people. "The feeling can't be compared. When you're in front of 500 or a 1,000 people, giving them the music and the mood they want, it's just really, really happy. I hope one day we can get that kind of club scene back, when the country really changes."

Until then, he's trying to break into the real estate market. He makes mixes in his spare time.