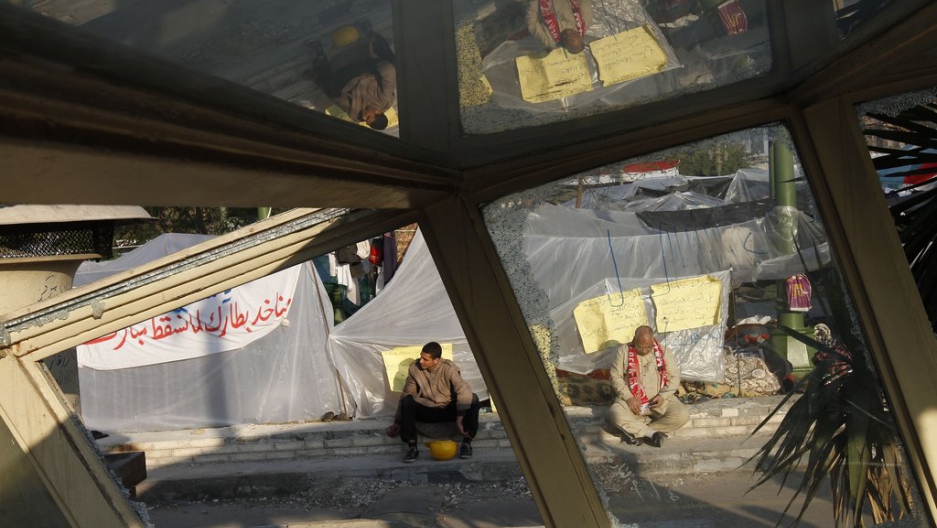 Anti-government protesters sit in front of their plastic sheeting tents early morning in Tahrir Square on February 8, 2011, on the 15th day of protests calling for an end to President Hosni Mubarak's regime.
Credit: Mohammed Abed
Share

CAIRO — Two years ago today, with history on the line and revolution in the air, a group of 15 idealistic young Egyptians came together under what became known as “the green tent.”

It was a Coleman “Montana” tent and its emerald color stood out against the ragtag maze of clear plastic sheeting and drab canvas tarps where hundreds of thousands of protesters set up a sprawling tent city that occupied Cairo’s Tahrir Square.

The 15 people using this eight-person tent as their base dubbed themselves the Revolutionary Youth Coalition. Through the heady 18 days of protests calling for then President Hosni Mubarak to step down after 30 years of brutal and corrupt rule, these young leaders were sought after by the world’s media and spoke for an array of voices in the square.

They were true believers in the idea of revolution, and they made history on February 11th, the night that Mubarak stepped down. They were united under that tent. Or, at least they thought they were.

They had no idea how bitterly divided they would become. As the revolution now splinters along religious and secular lines, it is increasingly pitting the Islamist majority of the Muslim Brotherhood and Salafi parties against the smaller, more fractured opposition of the National Salvation Front of socialists, labor activists and other factions supporting a more secular democracy.

GroundTruth revisited these young people over the last week to discuss where the ‘revolution’ stood two years on and whether their hope for a new Egypt had materialized. We found them not just politically divided, but barely on speaking terms.

Frustration replaced idealism as it became clear that the vision of a new democracy under an Islamist government was incompatible with many of those who once believed they were transforming the country into a representative democracy with equal rights for all. Violence in the streets now features these two sides – religious and secular – confronting each other.

By most accounts, the revolution has collapsed into fractured political parties, splintered ideologies and a sullen expression of regrets among these youth as to how they failed to seize an historic moment for their country.

Violent street clashes are a confusing scene of secular protesters lobbing Molotov cocktails at the Presidential Palace while insulted Islamists physically confront them using rocks and sticks. Meanwhile, government security forces either stand idly by or overreact with yet another brutal crackdown. The two weeks marking the anniversary of what became known as the ‘January 25 Revolution’ have claimed more than 50 lives.

This violence has transformed post-Mubarak Egypt, according to Ziad Akl, a senior researcher at the Al-Ahram Center for Political and Strategic Studies, a Cairo think tank.

“The street has changed. The demonstrations now are not what we knew in 2011. There is an organized, violent core at the heart of these demonstrations. And then there are the Islamists who are taking to the streets to defend the government. The fact is that religion has come to the fore. Egypt has always been conservative about religion, but never has there been such a public display of – and a real fight over – the role of religion in public life. We are going somewhere we have just not gone before,” said Akl.

So what happened to ‘the green tent’ and the spirit of unity it represented?