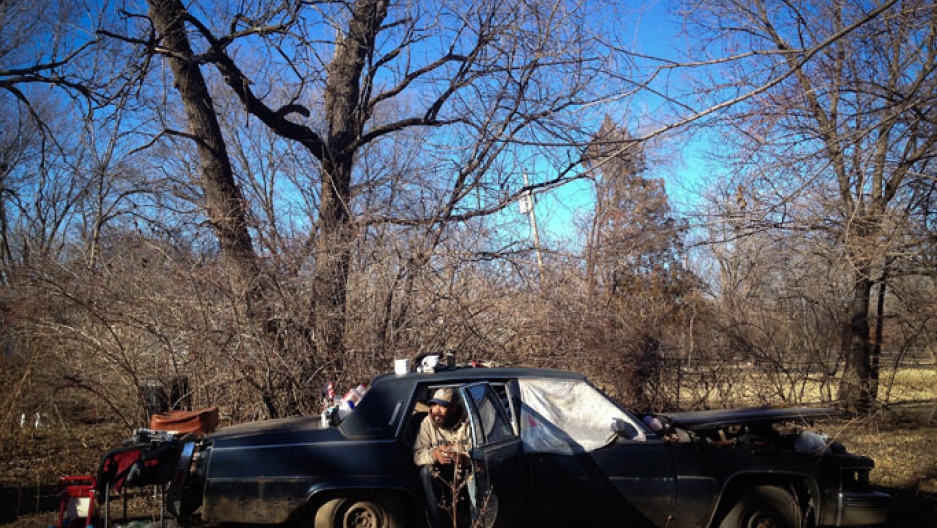 John Todd, one of Topeka's many homeless, lives in his car in the backyard of his mother's house.
Credit: Nichole Sobecki
Share

Comparing the Divide: President Barack Obama’s mother was from Kansas, and his father was from Kenya. As Obama prepares to deliver the first State of the Union address of his second term, stories of income inequality from Topeka and Nairobi offer insight into two distant places with a strikingly similar Gini coefficient (.425 in Topeka and .428 in Kenya) where many hope Obama can help reverse a global trend of rising inequality — while others see it as beyond his reach or responsibility.

TOPEKA, Kansas — The roar of passing cars and trucks echo beneath the Kansas Bridge, the drivers unaware that just below their wheels lies a makeshift encampment where half a dozen homeless men and women have found shelter.

“You get used to it,” said Steve, who asked to be identified by his first name only, gesturing towards the reverberating thunder above. His worn face is half-hidden beneath a blue knit cap as he lights a cigarette. Two years ago, Steve lost his factory job, and a year later his house.

Winter in Topeka brings a dry, biting cold, and the winds whip beneath the tunnel even in the warmest part of the day. Jackets, some canned food, a broken computer monitor and an empty toolbox lay stacked against a nearby support beam, the meager belongings of those who call this lonely outpost home.

While nationwide homelessness actually decreased by one percent between 2009 and 2011 — the result of significant federal investment — the tattered ranks of Kansas’ homeless and hungry are swelling, especially among families. During those same years the total meals served at the Topeka Rescue Mission rose 25 percent, and those seeking shelter rose 15 percent. Unable to accommodate the growing need, the Mission is adding on a new building with 170 additional beds.

“It’s indicative of what’s going on here,” says Mark DeGroff, director of communications for the Topeka Rescue Mission, who says he worries that rising income inequality is leaving too many Americans without their most important asset — a home.

The defining issue of our time

Just over a year ago, President Obama spoke to a crowed gathered in the small, eastern Kansas town of Osawatomie, calling growing inequality “the defining issue of our time.” Incomes of the top one percent have more than doubled in the last decade, while the average income has fallen by six percent.

“This is a make-or-break moment for the middle class, and for all those who are fighting to get into the middle class. Because what's at stake is whether this will be a country where working people can earn enough to raise a family, build a modest savings, own a home, secure their retirement,” Obama said.

Osawatomie was chosen for its historic and political resonance. More than a century ago Teddy Roosevelt issued a sounding call for progressive reforms from this same town to a crowd of more than 30,000. The former president called for government regulation of business and labor, and a “graduated income tax on big fortunes,” ideas Obama has also pushed.

The setting also put a spotlight on Obama’s Kansas roots – his mother was from Wichita, her father from El Dorado, and her mother from Augusta. Many here lay claim to Obama as a native son, an identification the 44th president sought to capitalize on: “I like to say that I got my name from my father, but I got my accent — and my values — from my mother.”

On an average morning in Kenya’s capital the streets buzz with the call of matatu drivers, Nairobi’s informal system of minibuses, hawkers selling magazines and chewing gum, and the hiss of oil as raw dough hits the frying pan that an aproned woman has set up on the sidewalk. On the surface this frenetic activity has little in common with Topeka’s understated, orderly industry, yet both places share a Gini coefficient — the standard measure of inequality — of .43.

Obama, too, links these two disparate places. His father was born on the shores of Lake Victoria in western Kenya, before attending college in the United States where he met and married the president’s mother.

In Auburn-Washburn, one of Topeka’s most affluent neighborhoods, towering reconstructions of English Tudor estates butt up against French-inspired chateaus, each opening out onto a private, manmade lake. Lenice Massey, now 94 and a great grandmother, has owned three homes in the neighborhood since she first moved here in 1951.

“The better homes have always been on this side,” she said, referring to the area east of Topeka Blvd., “but things have changed elsewhere.”

“The people who hurt the most are those just below me, you know, the middle class.”

When Massey first moved to Topeka in the early 1950s, the economy was booming for the first time in almost 30 years and the Civil Rights movement was mobilizing. Topeka became famous that year as the home of Linda Brown, an 8-year-old girl whose father sued the Topeka school board in the case responsible for eliminating the standard of “separate but equal” in American public schools: Brown v. Board of Education.

Women like Sheila McDonald, one of the few African-Americans to attend her university at the time, bear legacy to that landmark decision. Now a social worker at Topeka’s Robinson Middle School, McDonald thinks today’s most essential civil rights issue is no longer race.

“We have middle class families that are now poor, living below the poverty line,” said McDonald. “Whereas before it was racial, now it’s economic. We’ve got a new generation of poverty.”

Only 40 percent of American neighborhoods now have an average income within 20 percent of the national median, compared with 60 percent in the 1970s.

Cast in an afternoon glow in front of the Capitol last month, the president used his inauguration speech to reframe the inequality argument again, praising the value of proactive government, and refuting the idea voiced by conservative opponents that America is in danger of becoming “a nation of takers.”

“We do not believe that in this country, freedom is reserved for the lucky, or happiness for the few,” Obama said.

How to extend that happiness, though, is a point of stark divisions. Kansas is a primarily blue-collar state that always votes red. Only once since 1936 has the state gone to a Democrat — Lyndon Johnson’s 1964 landslide victory, and even then they had one of the closest margins in the country.

In Obama’s Osawatomie speech he blasted the theory of “trickle-down economics” — the idea that tax breaks and economic perks given to the top few will help create jobs for the rest of society, but many here remain loyal to the principles of low taxes and small government.

“You gotta get more people working, and get that going again,” said Dan Collins, a business owner whose wife has worked as a social worker for the state of Kansas for more than 30 years. “And you can’t get that by taxing these businesses too heavily. “

Kansas today is painted a darker shade of red than ever before. Since conservative Republicans took full control of the state in 2010 there have been major cuts to education and mental health care services. Just this month a bill that cuts state income tax by roughly $3.7 billion over five years came into effect. Last month a new bill was introduced that would eliminate the state’s individual income tax altogether.

From across a polished wood conference table in Topeka’s Chamber of Commerce, Marsha Sheahan, the Chamber’s vice president, expressed support for the state’s new direction, citing concern that the social welfare safety net has been choking their society.

“We have allowed some people in our society to not thrive, we have not set those expectations,” Sheahan said. “We have not expected them to learn to fish because we've always given them these social supports.”

Many who favor the ‘you’re on your own’ economics of the Republican Party share Sheahan’s fears.

“I didn’t come from a wealthy family,” said Douglas Kinsinger, the president of the Chamber, leaning forward in his leather chair. “But every individual has the opportunity to succeed if they work hard enough.”

For many, though, the American Dream of economic opportunity and upward mobility is increasingly seen as a myth.

Topeka is dotted with vacant lots and abandoned buildings, a sign of the toll the economic challenges of the past few years have taken on Kansas' capital city. Businesses like Hallmark, Jostens and Payless have either closed or significantly cut back their plants here in the past year.

“There’s this idea that exists for many people still that if you work hard enough in America you can succeed, and if you haven’t succeeded it’s because you’re not working hard enough,” said the social worker McDonald. “But this isn’t the 1950s anymore.”

Indeed, the landscape of today’s poverty is unrecognizable from what existed half a century ago. The number of children at shelters has swelled, says Topeka Rescue Mission director Barry Feaker. This past July and August there were for the first time more children staying than adult men — about 90 to 100 kids a night.

“The stereotype of the addicted, white male veteran isn’t who is homeless anymore,” said DeGroff.

More than a fifth of American children live in poverty — the second worst of all the advanced economies, putting it behind countries like Bulgaria, Latvia and Greece. In Topeka public schools last year, 579 school-aged children were homeless. Statewide, there were more than 8,900 homeless schoolchildren.

Even for those who still have a roof over their heads, the economic climate has exacerbated already challenging circumstances.

“Some people don't have water, some don't have gas. I go to people's homes where they actually have dirt floors,” said Adrienne Martinez, the only employee of A Hispanic Ministry of the Kansas East Conference United Methodist Church. “And people don’t seem to understand that, people who have these so-called luxuries of electricity and food.”

A matter of faith

For Martinez, a devout Christian, her work is intimately tied to her faith. Her ministry provides a food bank, English as a second language classes, computer training, help with immigration paperwork, translation and whatever else Martinez can fit into the limitations of a 24-hour day.

“The good Lord put me here to help these people,” she said, her voice breaking. “Now I just have to figure out how.”

To much of America, Kansas is abstract. It’s where Dorothy returns, and where Superman grew up. Those who call the state home, though, pride themselves on their individualism, and share a deep skepticism of the so-called “elites” from the country’s coasts, and more than anything, of too much government.

From the windows of their homes and churches, people here see their neighbor down the road far more clearly than any support that may be coming from Washington.

For Barry Feaker, the solution to his city’s problems is simple: “Just love the one that’s in front of you.”

With bowed heads and folded hands, he leads his colleagues in a simple prayer before they begin their day’s work: “Please Lord, give us the strength to help our neighbor, and all those suffering from poverty, mental illness, or just a broken heart.”