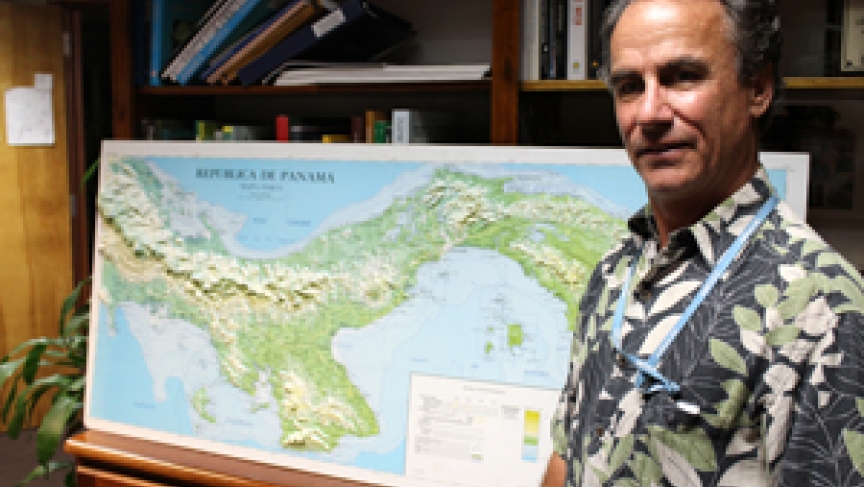 When the Panama Canal was first built a century ago, it unearthed scientific treasure — countless fossils and geological clues to Panama's past. But once the construction stopped, the jungle rushed back in, blanketing the land and concealing the geology.

"You couldn't read the history anymore — you didn't know where to look for fossils," says Eldredge Bermingham, director of the Smithsonian Tropical Research Institute, in Panama City. "As a result, our understanding of the history of Panama was sort of frozen in time in 1914."

Now, though, the canal is being widened, and what lies beneath this slab of Earth is once again being revealed.
Unearthing the Past

Next to the canal, on a slope that has been graded by heavy machinery, Tony Singerhouse chisels away at the soft rock. Singerhouse is a field assistant with the Florida Museum of Natural History, and he just found a small fossil.

It's a jaw of a protoceratid," he explains. (A protoceratid is an extinct relative of cattle and goats.) The fossilized jaw is embedded in four chunks of rock.

"So we will take it back to the lab and we will glue it together," he says.

This fossil comes from 20 million years ago. At that time, North and South America were separated by about 150 miles of salt water. Panama was the southernmost extent — the edge — of North America.

That makes Panama an interesting place for scientists to learn about the animals that were living here before the land bridge between the continents was formed — before crossing over into South America became possible.

Many of the fossils turning up in Panama come from species that were known to live much farther north — as far north as the Dakotas. A discovery of a specimen here can mean a doubling of an animal's known range.

University of Florida paleontologist Aaron Wood says, "That's why this particular locality is important. We're seeing a record of animals that were able to adapt to a diverse range of habitats."
Life at the Edge

Recent digs have revealed a rich array of animals that lived here 20 million years ago, including miniature horses and tiny camels just a couple of feet tall. There was also a fearsome predator the size of a black bear, called a bear dog.

Over the last several years, scientists have taken the number of species they used to think lived here and multiplied it by a factor of ten.

"I think we owe the knowledge of the biodiversity of Panama to the Panama Canal expansion," says Federico Moreno, a geologist from Colombia. "You have specialist[s] from all over the world coming here to the canal every day of the year."

Scientists are now filling in a detailed portrait of the animals and plants that were here at the moment when North and South America finally made contact.

But Eldredge Bermingham of the Smithsonian Tropical Research Institute says this burst of discovery will not continue much longer.

"[What will] happen is the expansion is going to finish, there's not going to be new digs, those landscapes will overgrow just as they did 100 years ago," he says. "And as a result, we'll pretty quickly see a dramatic reduction in new discoveries."

The canal expansion project is scheduled to finish by the fall of 2014, which is when this window on Earth's history will begin to close.