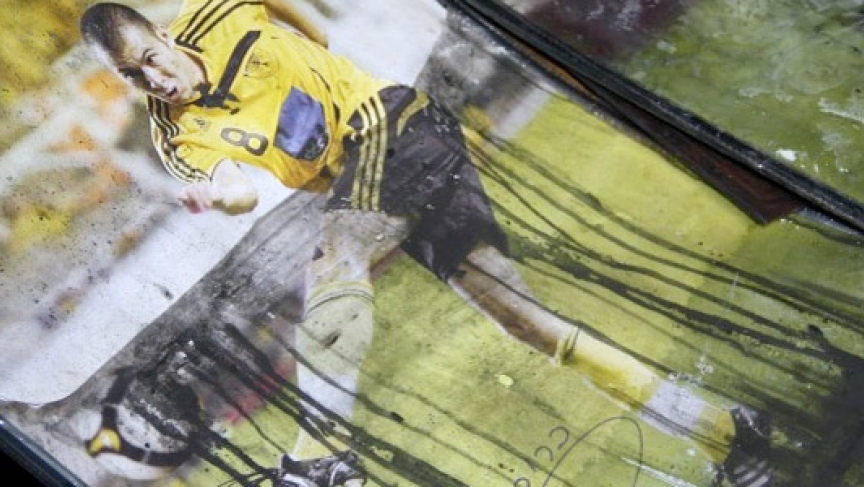 One of Israel's leading professional soccer clubs is going through a nasty episode of intolerance — and violence. Some of the fans of Beitar Jerusalem are angry about their team signing two Muslims. Up until a few weeks ago, the team was the only one in Israel with an all-Jewish roster.

The Muslim players are both from Chechnya, and since their arrival in Jerusalem they have been subjected to taunts and harassment. Four Beitar fans have been indicted on charges of racial harassment. And on Friday, there was a suspected arson attack on the soccer club's Jerusalem offices.

It made for a tense atmosphere going into last night's home game against a rival team from the Arab city of Sakhnin in northern Israel.

Israeli soccer is hardly alone in dealing with the problem. But in a league that's long been concerned about racist incitement from fans, hardcore Beitar supporters have stood out for their bad behavior.

There is no alcohol on sale at the Jerusalem stadium. Still, no matter where you sit for a Beitar match at home, fans would be likely to hear chants like, "Death to the Arabs!"

Several recent incidents though — especially torching the team's office — seem to have sparked a backlash.

Israeli officials from the Jerusalem mayor to the prime minister have denounced the behavior of Beitar fans. And last night, authorities wanted to send a message. They put 700 police and security officers on duty for the game. Outside the stadium, anyone displaying symbols of a radical fan group called "La Familia" was not allowed in. Some fans were clearly annoyed.

Waiting in line with friends to get in to the game, 16-year-old Linoy told me she's been a Beitar fan her whole life. "This is a Jewish land," she said. "Beitar should be a Jewish team, without any Arab or Muslim players."

"The owner is trying to destroy the team by bringing in two Muslims," against the wishes of supporters, she added.

The hometown crowd of mostly young men sang along with the national anthem. But only half the stadium was full. The section that is usually packed with the most enthusiastic Beitar supporters was completely empty, by order of the Israel Football Association. In their place a huge banner in team colors yellow and black read, "Violence and racism? Not on our field!"

The announcer told fans to refrain from racist chants or they would be kicked out. And that seemed to work. Nonetheless, there were still plenty of profanity-laced chants aimed at the Beitar management and the opposing team of Bnei Sakhnin.

The atmosphere in the stadium changed when the visiting team scored first. Sakhnin added another goal before half-time. Arab fans bused in from Sakhnin sat in their own separate section, cordoned off by large numbers of uniformed police and security. As their team took control of the game, Sakhnin fans chanted "God is great," in Arabic.

A police officer standing nearby said things might get ugly if the game remained so lopsided. But the home team came alive in the second half. Beitar answered with a goal of its own. And then another.

The cops on duty might have breathed a sigh of relief at that point, as Beitar tied the game.

With 10 minutes to play, the home team then sent in one of its new Muslim players. It was 19-year-old Gabriel Kadiev's debut with his new team.

Some Beitar fans made a point of standing and clapping for the defender. But that show of enthusiasm was quickly overpowered as others whistled and jeered every time Kadiev touched the ball.

The match ended in a 2-2 draw. By the end, a few dozen people from either side had been ejected from the stadium by police. But there wasn't any serious trouble.

One fan, 25-year-old Almog, had this to say about Beitar's two new Muslim players.

Almog said the fans behind most of the violence and racism are a small minority, and that he hopes the authorities will win the fight against these extremists.

"I really hope," he said. "It's a fight, …not just about football. It's about the whole country, about the society."

"Something bigger," he said.