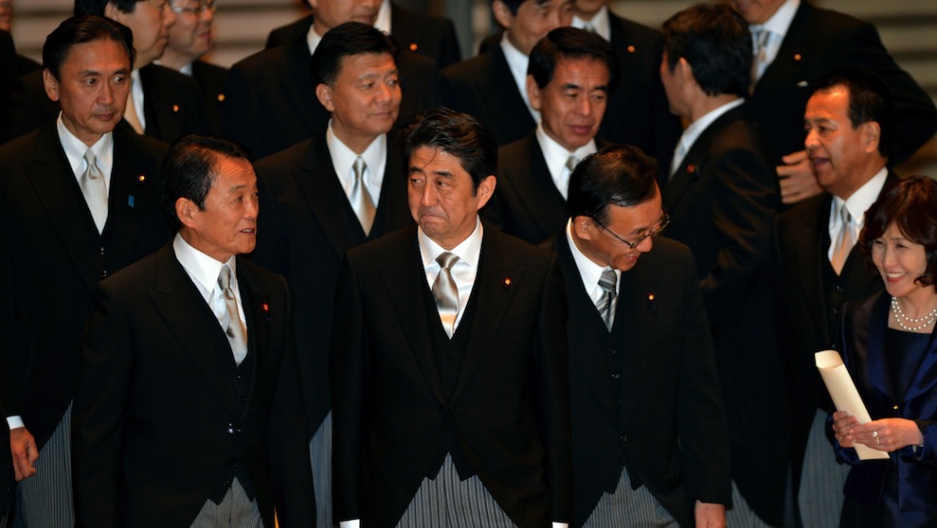 Japan's new Prime Minister Shinzo Abe (C), accompanied by Finance Minister Taro Aso (3L) and Justice Minister Sadakazu Tanigaki (2nd R), waits for his vehicle after a photo session with his cabinet members as they were inaugurated before Emperor Akihito at the Imperial Palace in Tokyo on December 26, 2012. Abe was elected Japan's prime minister by the lower house of parliament after he swept to power on a hawkish platform of getting tough on diplomatic issues while fixing the economy.
Credit: YOSHIKAZU TSUNO
Share

TOKYO — Deflation, stagnation and not one, but two "lost decades." Those bywords for Japan's economy since its asset-inflated bubble burst in the late 1980s are giving way to a new mantra: Abenomics.

The combination of super-loose monetary policy and stimulus spending, named after Japan's new prime minister Shinzo Abe, has given the world's third-biggest economy reason to be optimistic, and its trading partners cause for concern.

In his first major economic policy speech after his Liberal Democratic Party [LDP] won last December's general election, Abe predicted 2013 — the year of the snake — would be when Japan finally sheds its deflationary skin and repairs its tattered finances.

Just over a month in, his dual prescription of printing money and debt-financed public spending is having the desired effect.

The Nikkei stock average is set to post its 12th straight week of gains — the longest streak for more than half a century — while the dollar had gained about 16 percent on the yen since November, bringing respite to Japan's long-suffering exporters.

For the first time in years, Japan appears to have a leader armed with the self-belief that was so clearly missing among the half a dozen leaders to have occupied the Kantei, the prime minister's official residence in Tokyo, since Junichiro Koizumi resigned in 2006.

While voters may have warmed to his strategy to end chronic deflation and boost growth, Abe quickly set himself on a collision course with skeptics at home and abroad.

He has brow beaten the Bank of Japan into doubling its inflation target to 2 percent and committing to "open-ended" asset buying — a challenge to the central bank's independence that appears to have prompted its governor, Masaaki Shirakawa, to announce he will leave the post three weeks before his term ends.

Abe remains unbowed, saying he wants nothing less than "regime change" at the central bank, led by a new governor "who appreciates my basic policies to beat deflation."

The rise in investor sentiment is bringing Abe political gains, too. According to the most recent poll, support for his cabinet has risen to more than 66 percent, up from 62 percent after the LDP's victory almost two months ago.

But Abenomics has not been greeted with universal enthusiasm. Japan's competitors in Europe have voiced concern that Tokyo is deliberately sparking a currency war to gain an unfair export advantage.

"I don't want to say that I look toward Japan completely without concern at the moment," Germany's chancellor, Angela Merkel, said recently. "In Germany, we believe that central banks are not there to clean up bad policy decisions and a lack of competitiveness."

At home, there are concerns that Abe is more interested in short-term gains in the hope that his party seizes absolute control of parliament when upper house elections are held in July, at the expense of painful structural reforms.

Little is being done to address chronically weak demand, a major obstacle to recovery. As long as households worry about job security and stagnant wages, a domestic spending spree is unlikely to happen any time soon.

Instead, families face additional strain from a controversial doubling of the consumption tax to 10 percent over the next three years. "It will take a lot to unleash consumers," said Robert Dujarric, director of the Institute of Contemporary Asian studies at Temple University in Tokyo. "After 20 or more years of stagnation or low growth, it will take a lot to convince them that things have changed."

Critics wonder whether Keynesian-style stimulus means a return to the "bridges to nowhere" pork barrel politics that characterized the LDP's postwar dominance, with unnecessary public works sprouting up in key battleground constituencies.

"It could turn out to be the same old story, with money going to familiar vested interests, particularly in the countryside," said Koichi Nakano, a political science professor at Sophia University in Tokyo. "It will be important to keep an eye on where the cash goes."

In addition, it appears that, for now at least, Abe is content to set aside Japan's public debt, now more than 230 percent of its GDP, according to the International Monetary Fund. And while a weaker yen will help exporters, the price of imports on which Japan is heavily reliant - notably energy - is eating into its current account surplus.

Japan's participation in the Trans-Pacific Partnership free trade pact, a move many believe would cause short-term pain but bring bigger gains in the long-term, is unlikely to be a priority for Abe's LDP, many of whose MPs are supported by the protectionist farming lobby.

But with the recent unveiling of a record budget that includes 10.3 trillion yen in fresh stimulus, and a new, on-message central bank governor due to take up his post next month, Abenomics are gathering momentum.

As the finance minister, Taro Aso, said this week: "The government's top priority is restoring a strong economy by pulling the country out of economic stagnation stemming from the strong yen and deflation, by increasing jobs and income."

Those are noble aims, but they camouflage serious economic fissures that will reopen unless Abe gets serious about structural reform.

"Sound temporary macroeconomic stimulus is needed to catalyze recovery and offset the pain caused by structural reform, but Mr. Abe proposes these painkillers [of monetary easing and stimulus] precisely to evade reform," Richard Katz, editor of the Oriental Economist, wrote in the Wall Street Journal this week.

"Once the painkillers are withdrawn, though, Japan will do what it has done after previous doses: fall back into stagnation."