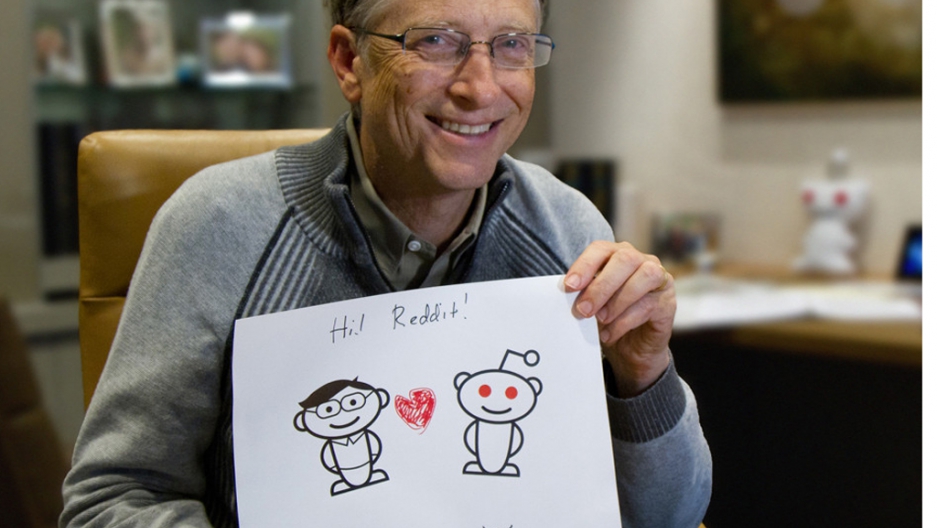 Bill Gates got real on Reddit today, opening up about Microsoft, his foundation's work and Steve Jobs in an Ask Me Anything session.

The Microsoft founder and co-chair of the Bill and Melinda Gates Foundation began answering the unfiltered questions at 10:45 a.m. PST.

Since then, Redditors have flooded the thread with more than 10,000 comments and questions about everything from career advice to his preference on tacos versus burritos, The Huffington Post reported.

As is traditional, Gates verified it was really him by taking a picture of himself holding a piece of paper with his username.

Here are some of the more interesting things he had to say:

On the next big thing to shake up consumer technology:

"Robots, pervasive screens, speech interaction will all change the way we look at “computers”. Once seeing, hearing, and reading (including handwriting) work very well you will interact in new ways..."

On his relationship with Steve Jobs:

"He and I respected each other. Our biggest joint project was the Mac where Microsoft had more people on the project than Apple did as we wrote a lot of applications. I saw Steve regularly over the years including spending an afternoon with him a few months before he tragically passed away…"

On his biggest regret at Microsoft (He's referring to WinFS or Windows Future Storage):

"We had a rich database as the client/cloud store that was part of a Windows release that was before its time. This is an idea that will remerge since your cloud store will be rich with schema rather than just a bunch of files and the client will be a partial replica of it with rich schema understanding."

"I love playing tennis. I am an avid bridge player (a card game if you have not heard of it – it was more popular in the past!). I like to tour interesting things with my kids like power plants, garbage dumps, the Large Hadron Collider, Antarctica, missile Silos (Arizona),… I read a lot and watch courses (online or the Learning Company)..."

Whether he still programs/writes code:

"Not as much as I would like to. I write some C, C# and some Basic. I am surprised new languages have not made more progress in simplifying programming. It would be great if most high school kids were exposed to programming…"

Gates then also shared his answers in a YouTube video: