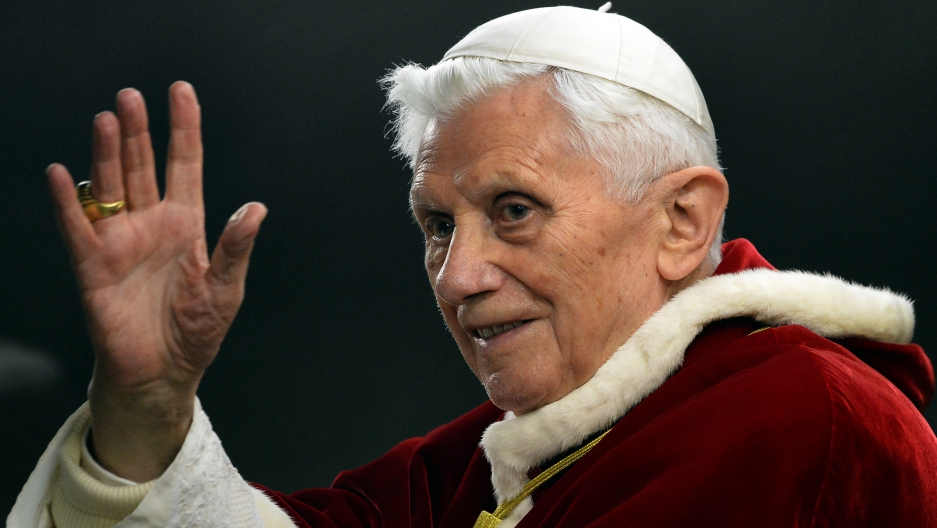 Pope Benedict XVI salutes as he arrives in St. Peter's Square on December 29, 2012. The pope on February 11, 2013 announced he will resign on February 28, which will make him the first pope to do so in centuries.
Credit: Alberto Pizzoli
Share

When Pope Benedict XVI startled one billion members of the global Catholic church and made news all over the world with his resignation in Rome on Monday morning, he did so in Latin, saying that he was planning to step down due to a deterioration in “strength of mind...to adequately fulfill the ministry entrusted to me.”

That he made the stunning announcement in the ancient language of the Roman Catholic Church seems somehow perfectly fitting for a papacy steeped in — some Vatican observers might even say trapped by — tradition and a yearning to return the Church to a time of obedience that existed before the Second Vatican Council 50 years ago.

Coming two days before Ash Wednesday, the Vatican announcement that Benedict would conclude his papacy Feb. 28, with the conclave to elect a new pontiff in mid-March, suggests a majestic passing of power on global television just before the Easter liturgy of Christian rebirth.

In other words, how the 85-year-old pope announced his resignation, the only pontiff to do so in some 600 years, and the choreographed timing of the transition he has imposed says everything about who he is as a leader of the church.

Benedict will be remembered as the pope of ironies, a moral fundamentalist and chief theologian under his predecessor Pope John Paul II. His prosecutorial bent left him ill-suited as pastor of a global church at a time when the church is in crisis in North America and Western Europe and yet growing in Africa and Latin America.

The persona every pope seeks is that of peacemaker, the moral statesman on the international stage and a champion of peace. But most historians and Vatican watchers would agree that this pope has hardly been a peacemaker. His papacy has been particularly divisive, pitting a more conservative cabal inside the Vatican against more liberal forces trying to push the Church to rethink celibacy, to consider ordaining women and to reflect more deeply on the internal corruption that prompted a priest sex abuse crisis to lead to a financial crisis in the church.

Although several of his encyclicals gave eloquent voice to the values of a moral statesman and champion of peace, the image of a peacemaker eluded Benedict, largely because of the clergy abuse crisis inherited from John Paul II.

Although he engineered a major reform in 2001 as Cardinal Joseph Ratzinger, persuading John Paul to consolidate the power in his Congregation for the Doctrine of the Faith (CDF) to defrock the worst clergy offenders, as pope he recoiled from holding complicit cardinals and bishops accountable even when they violated the trust of the church.

“When the danger is great one must not run away,” the pope said in “Light of the World,” a 2010 book based on a series of interviews with Peter Seewald. The author asked the pope if Europe’s spreading abuse crisis made him think of resigning.

“Precisely at a time like this one must stand fast and endure the difficult situation,” he continued. “One can resign at a peaceful moment or when one simply cannot go on.”

The peaceful moment apparently never came, though his statement this morning let people know he was tired and perhaps can’t go on with the demands of leading a global church in the digital age.

His papacy was marred, early on, by the attempt to bring the schismatic Society of Pius X movement, which believes in restoring the language of the Catholic Mass to Latin, back into the fold. This dramatic move came after John Paul excommunicated the reactionary leaders. Benedict’s gesture backfired when a Pius X bishop called the Holocaust a hoax on Swedish television.

Harsh media coverage in 2010 of the abuse crisis that rocked Ireland and Western Europe exposed failures of the Vatican’s ancient system of tribunals to handle cases of a criminal nature when cardinals and bishop function with de facto immunity.

Amid those unresolved issues, the pope approved an investigation of American nuns, prodded by Cardinal Bernard Law, who had resigned in 2002 as the disgraced archbishop of Boston following a sex abuse crisis that engulfed the city and the country. Media coverage praising nuns, and criticizing the Vatican, had barely abated when Paolo Gabriele, Benedict’s personal butler, was arrested for leaking internal documents to the journalist Gianluigi Nuzzi for an explosive book, Sua Santità (His Holiness).

The ensuing media coverage portrayed Cardinal Tarcisio Bertone, the Secretary of State, as a polarizing figure within the Roman Curia, and a target of Vatican officials who used the butler in trying to drive the resignation of Bertone. Benedict stood by Bertone as the larger story emerged of a culture of Curial cardinals, who by tradition show absolute loyalty to the pope, as balkanized in turf wars.

Losing the loyalty of his own butler, with whom he had lunch in his living quarters several times a month, was perhaps the harshest blow for Benedict. In the last two years he had shown uncommon detachment from the daily grind of governance, retreating after lunch to work on scholarly writings in the afternoons. Meanwhile, lower-level Vatican staff and would-be successors jockeyed for power.

Gabriele’s trial last November was marked by the judge’s resistance to allowing certain documents and witnesses into testimony, while pushing a swift decision that sent Gabriele to a Vatican City cell. Two months later Benedict pardoned him.

As Cardinal Ratzinger he spent nearly a quarter-century as prefect of CDF. Among notable priests who suffered the loss of their licenses to teach theology after closed proceedings were Hans Küng, a former colleague of Ratzinger’s at Germany’s University of Tübingen for his critique of papal infallibility, and Charles Curran of Catholic University of America for criticizing the 1968 encyclical banning birth control devices.

Ratzinger became famous for an unflinching, prosecutorial approach to theology, which made him a bête noir among many progressives within the Catholic Church. Küng famously called him the Grand Inquisitor, after the dark cardinal who persecutes heretics in The Brothers Karamazov. The deep division between Benedict’s conservative loyalists against the progressive was a topic for a GlobalPost Special Report titled “A New Inquisition” and this global clash will provide a backdrop to the upcoming process of electing a new pope.

As as pope, it seemed Benedict needed his own inquisitor to help bring structural reform by punishing cardinals and bishops, like Law, with much to answer for in presiding over an abuse crisis that has rocked the church to its core. In the end, Benedict could not bring himself to reform the fraternal culture of the Curia that had given him supreme power. In the unkindest of ironies, the scandal he worked so hard as a cardinal to reverse had its own inexorable drive which wore down his energy. By failing to foster a government of laws, he hands his successor the same problem John Paul handed him.

Jason Berry writes on religion for GlobalPost Special Reports and for GlobalPost’s new religion blog, “Belief.” He is the author of “Render unto Rome: The Secret Life of Money in the Catholic Church” (Crown), which won the Investigative Reporters and Editors 2011 Book Award.