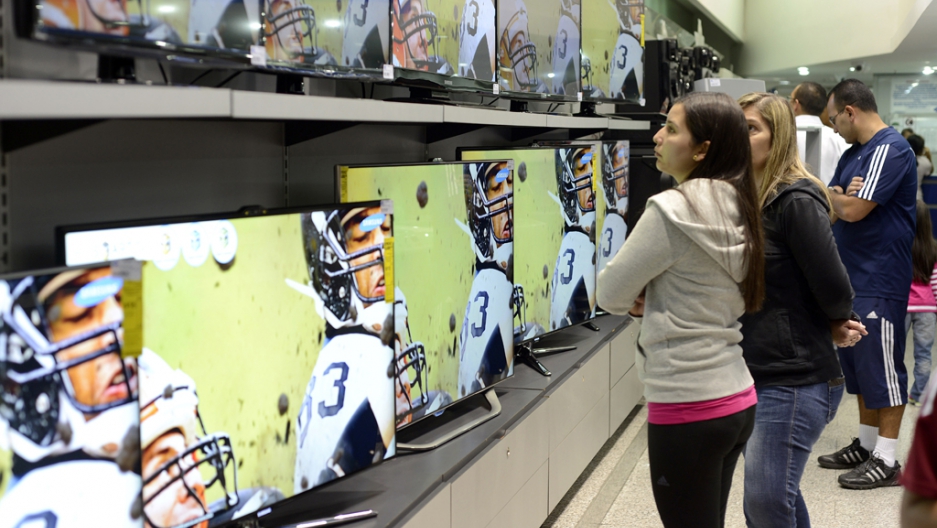 Venezuelan shoppers are eying televisions that could become pricier after the government's devaluation of the national currency, the bolivar fuerte, against the US dollar takes effect.
Credit: JUAN BARRETO
Share

CARACAS, Venezuela — Sitting outside a supermarket in Caracas, Maria Gonzalez is despondent about the latest economic news to come from her socialist government.

Under President Hugo Chavez's orders, his cabinet says, the Venezuelan government will devalue the national currency on Wednesday by nearly a third, from 4.30 to 6.30 bolivares fuertes to the US dollar.

Indeed, the public has not seen Chavez for nearly two months now after his cancer operation in Cuba in early December. This is in a country very much used to his garrulous ubiquity.

Yet devaluation has become increasingly necessary in recent months, analysts say. Venezuela’s black market exchange rate had been more than four times the official value and, on the announcement Friday afternoon, it rose even further to about 20 bolivares fuertes per dollar, though it’s expected to stabilize.

Despite the connotations of the black market label, its use is very common in Venezuela. Foreigners frequently use it to buy local currency and Venezuelans use it in many transactions dealing with imported goods — anything from clothing to electronics.

That’s why — in practice — Caracas is probably not the region’s most expensive city, as the Economist Intelligence Unit labeled it last week. Very few people actually use the official rate that would make it so.

The 31.7 percent devaluation won’t weaken Venezuela’s currency enough to match the black market rate and so economists expect another devaluation in the coming months.

The government hopes the move will narrow its budget deficit as it automatically will be able to claim more bolivares per dollar it earns for oil.

It also aims to increase access to dollars in Venezuela, which is important for buying foreign products especially when domestic manufacturing has stagnated.

While many applauded the latest move, economists predict it will ramp up Venezuela’s inflation, already among the world’s highest, as so many products sold in Venezuela are imported. They say the weaker bolivar will push up the cost of bringing in those goods.

“All the prices are going to go up,” said university math teacher Oswaldo Lugo, 58, outside a grocery store in Caracas. “It’s horrible because our wages are so tiny. Monetary politics in this country is in a terrible state.”

Politics, analysts say, have overshadowed economic necessity. With Chavez away for cancer treatment so long and many Venezuelans doubting his return to power, an election seems inevitable this year. The government appears reluctant to devalue the country’s savings before asking for its vote.

More from GlobalPost: Chavez's fans yearn for his triumphant return

“Clearly, the economic and financial cost of waiting outweighed the political cost of the unpopular move to devalue,” Alberto Ramos, head of Latin America economics at Goldman Sachs in New York, wrote in a note to investors.

The political fallout may have been mitigated slightly by the announcement's timing: the Friday afternoon before Venezuela’s capital city emptied as many residents spend the four-day Carnival weekend at the beach.

“Another devaluation will follow and the root causes of [the currency’s] weakness have not been addressed. Inflation will certainly accelerate 30 percent-plus this year,” Ramos added, speaking to GlobalPost.

While that figure is high in comparison to most developed countries, it could help to see it in the context of Venezuela’s core inflation rate. Annual inflation in 2012 was 20.1 percent, according to the government, and that was the lowest figure in four years.

The devaluation is the fifth in under a decade by the Chavez government, an indication to many in the opposition that its self-styled socialist economics are not working. The last devaluation took place in 2010.

Opposition leader Henrique Capriles Radonski, who lost October’s presidential election to Chavez, wrote on Twitter: “Oil is at $106 and they have to devalue!”

Indeed, Venezuela has the world’s largest oil reserves and it’s the fifth-biggest exporter of crude to the US. It’s that black gold, however badly managed critics say it is, that’s kept the economy off its knees.

“It’s very worrying that at $100 plus, the price of the Venezuelan oil basket, the country hasn't managed to put into order its fiscal situation facing a very distorted economy,” says Carlos Bellorin, an oil and gas analyst at IHS, a business information provider in London.

Chavez, who has governed Venezuela for 14 years, began a third six-year term last month. However, Vice President Nicolas Maduro stepped in for the inauguration. This angered much of the opposition, though was given the green light by the country’s Supreme Court, largely made up of Chavez supporters.

As well as the swearing-in, Maduro has played president at Chavez’s State of the Union address and various party celebrations.

Should a vote be called in the case that Chavez is certain not to be able to continue his tenure, Maduro has a very good chance of winning.

Finance Minister Jorge Giordani insisted that Chavez was behind the devaluation, despite no proof of life from the ailing 58-year-old for nearly two months.

“We have taken this as a presidential order,” Giordani said, adding that there was much work ahead.

There have been other apparent signatures from Chavez, though many here have ruled them out as counterfeits.

The government introduced currency controls in February 2003, saying it needed to curb capital flight. Individuals may only exchange the official equivalent of $3,000 per year.

Chavez’s critics in the opposition, and on Wall Street, blame the government’s currency controls and high spending for Venezuela’s short supply of dollars.

Chavez’s supporters have attributed the devaluation not to tight economic controls but rather wider economic problems across the world.

“The problem is the capital system, which wants profits and more profits,” said 55-year-old Omaira Fermin, sitting in downtown Caracas. “There’s a financial crisis across the world. Of course Venezuela can’t escape this.”

More from GlobalPost: Will Venezuela open up to foreign oil investment?