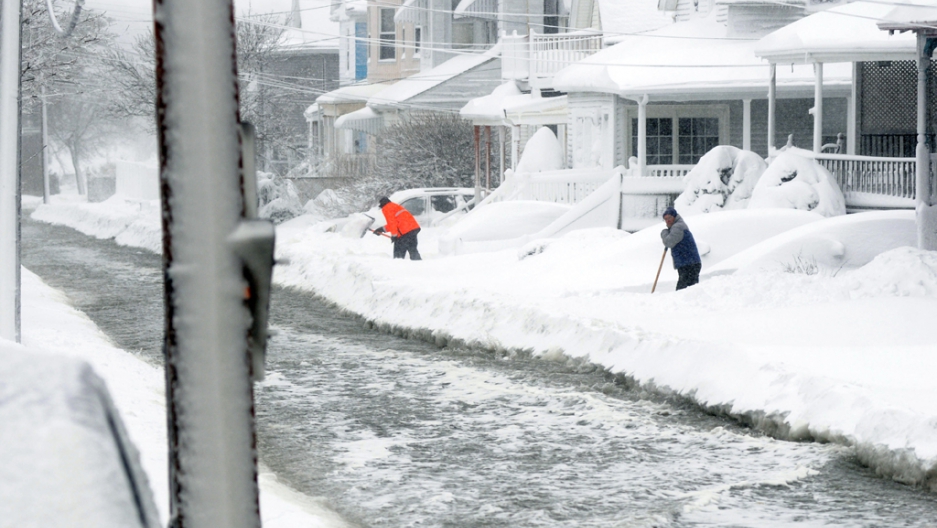 People shovel snow as flood waters go down Coral Street on Feb. 9, 2013, in Winthrop, Massachusetts. An overnight blizzard left one to three feet of snow in areas, and coastal flooding is expected as the storm lingers into the day.
Credit: Darren McCollester
Share

The death toll from snowstorm Nemo which struck the northeast of the United States and Canada has risen to nine as the clean-up continues.

Among those killed was an 11-year-old boy in Boston, who died when he was overcome by carbon monoxide in a running car that his father was digging out of a snow bank, CNN reported.

Also killed was a New York man, 23, who died in a tractor accident while plowing his driveway.

While the blizzard has ended in New York City, heavy snow and strong wind gusts are expected to continue across much of New England Sunday, before tapering off from west to east through the afternoon, according to the National Weather Service.

At least 400,000 properties remained without power early Sunday, and residents in some of the hardest hit areas, such as Massachusetts and Rhode Island, were warned they could be in the dark for at least for another day, USA Today reported.

In good news for travellers, Amtrak said trains between New York and Boston, which were suspended Saturday, would resume Sunday.

Flights were expected to be back on close to normal schedules on Sunday, AP reported.

The mayor of the Connecticut city of Stratford, John Harkins, told BBC News the snowfall was unprecedented in his lifetime.

"Even the ploughs are getting stuck," Mr Harkins told local WITH television.

According to Fox News, a 74-year-old man was killed in Poughkeepsie, NY, after he was hit by a car. The 18-year-old driver said she lost control because of the snow.

In southern Ontario, two other men were also killed in car accidents, and an 80-year-old woman collapsed while shoveling her driveway.

More than 38 inches of snow fell in parts of central Connecticut, while areas of southeastern Massachusetts, Rhode Island and New Hampshire got at least 2 feet of snow, with more falling, The Associated Press reported.

Roads were impassable, and traffic bans remained in place in Connecticut, Massachusetts and Rhode Island.

According to CNN, ambulance crews responding to stranded motorists are getting stuck themselves and, in some cases, have literally ran people to nearby hospitals.

More than 700,000 homes and businesses lost electricity due to the storm and more than 5,300 flights were cancelled, Reuters reported.

At the height of the storm, New York City closed its three major airports and Boston's Logan Airport wasn't operating as well.

Nemo hit at the beginning of the weekend and has been blamed for a 19-car pileup in Cumberland, Maine, noted Fox. Hundreds of cars started getting stuck on New York's Long Island Expressway Friday afternoon, with plenty still being helped by police Saturday.