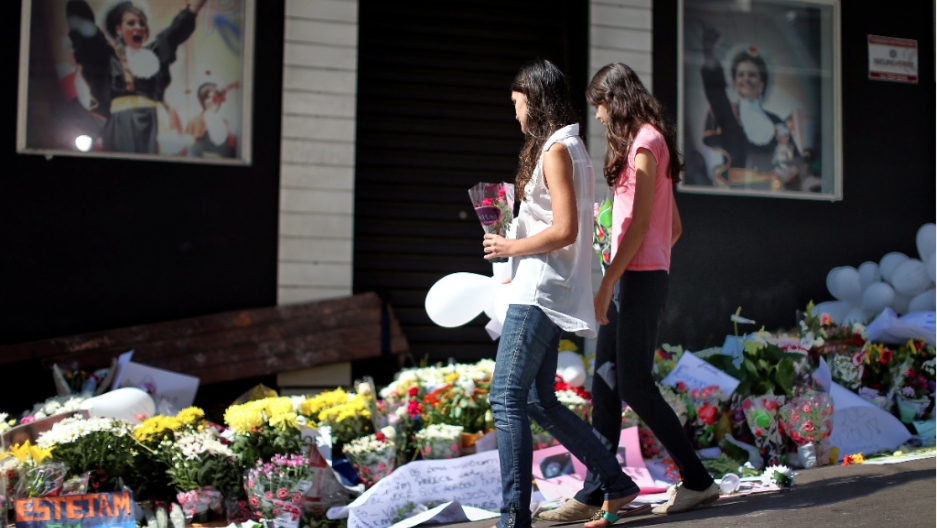 Friends and family lay flowers outside the nightclub in Brazil where more than 230 young people perished in a fire.
Share

A woman who had a lucky escape from the Brazilian nightclub fire after making a last-minute decision to stay at home was killed 10 days later in a car accident.

Jessica de Lima Rohl, who was one of the organizers of the university party which claimed the lives of 233 people, decided not to go to the nightclub on that fateful night after her boyfriend begged her to stay home, the Daily Mail reported.

Ten days later Rohl, 21, and her boyfriend, Mr Stefanel, were killed in a freak car accident.

The tragedy has further shaken the local community who are still mourning the deaths of at least 233 people who died in the nightclub inferno in a university city in southern Brazil, the BBC reported.

Local media say the fire began when a band let off fireworks at the Kiss club in Santa Maria, Rio Grande do Sul.

Many victims reportedly inhaled toxic fumes or were crushed as panicking clubbers tried to escape.

Mr Stefanel's father Nilton, told Brazil's Terra website his son was so grateful his girlfriend listened to his advice and decided not to attend the party.

"He probably had a feeling about something and he asked for her not to go, and she ended up not going.

"Jessica was so happy and thankful for having listened to his advice. From that moment she regarded him as her guardian angel, and he felt like a hero for having saved somebody."

But in a freak accident, the couple is now dead. Police said the accident happened last Thursday when their car collided head-on with a truck.

Rohl died instantly, and Stefanel - who would have turned 21 the next day - died later in hospital.

Meanwhile in Sao Paulo Friday, Carnivale celebrations were in full swing, raising questions about the safety of patrons in clubs in the area, the Huffington Post reported.

Since the tragedy, authorities across the country have been cracking down on bars and clubs, conducting fire inspections and closing dozens of clubs in many major cities, mostly citing problems with the establishments' paperwork.

But most of the clubs have already reopened, leading fire experts to say few changes were put in place to really improve safety for patrons.