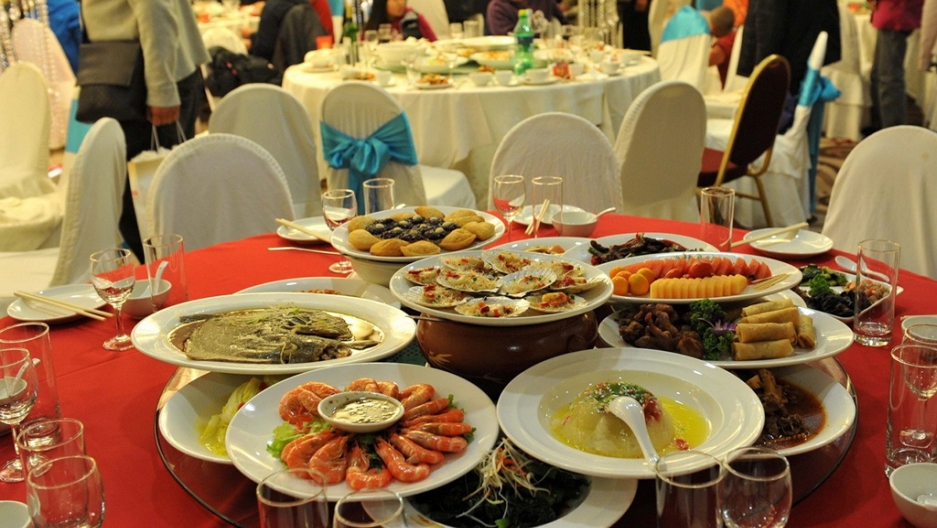 A table setting from a banquet in Kunming, Yunnan province. No one was seated at this table, so all the food went to waste. [WenxueCity.com]
Share

HONG KONG — You could say the new symbol of China’s anti-corruption crusade is the doggy bag.

Secretary General Xi Jinping has called for a return to thriftiness in frugality among China’s leaders, who are notorious for hosting lavish banquets with more dishes than guests could possibly eat. In 2011, the government spent approximately $48 billion on banquets.

"These habits of waste must be stopped immediately!” he commented, leading to a blitz of coverage in state-run media, with front-page spreads and hortatory headlines such as, “Restaurants Should Order Half Entrees.”

Most egregious to many were the extravagance of the dishes being tossed. Shark’s fin soup, sea cucumber, and abalone — which can cost over $250 per head — were particularly over-ordered as a sign of status.

Asked if she was bothered to be throwing away such delicacies, one waitress snapped at a Xinhua reporter, "How could it not? That single fish cost more than I earn in a week!"

Yet Chinese reporters found that some of these government banquets didn't disappear, but simply went out of sight; bookings for private rooms at hotels zoomed upward in January.

Food waste is not simply a problem for China’s elite. A culture of wanting to impress guests with abundance means that many hosts also order to excess.

Users on Sina Weibo, China's version of Twitter, have rallied around the cause, sharing pictures of waiters holding plates with written slogans, and images of empty banquet tables piled high with multi-course meals.

"My hope for Spring Festival this year is for friends to follow the Clean Plate way," wrote Weibo user FineHelen. "At every meal to order only what you can eat, not squander, and gradually inspire your friends and family to also do the same."

Chen Guangbiao, a millionaire philanthropist with Donald Trump’s gift for public relations stunts, declared that he was applying to legally change his name to “Chen Empty Plate.”

Some have called for even more extreme action. Yuan Longping, China’s most famous agricultural scientist, went so far as to suggest it should be criminal.

“I suggest the government prohibit wasting food by treating it as a kind of crime and shameful behavior," he told China Central Television.

On a more modest — and realistic scale — nearly 750 restaurants in Beijing have decided to reduce their portion sizes. And Minister of Commerce Chen Deming said on Monday that some restaurants have started offering gifts for diners who eat the remnants of banquet meals.