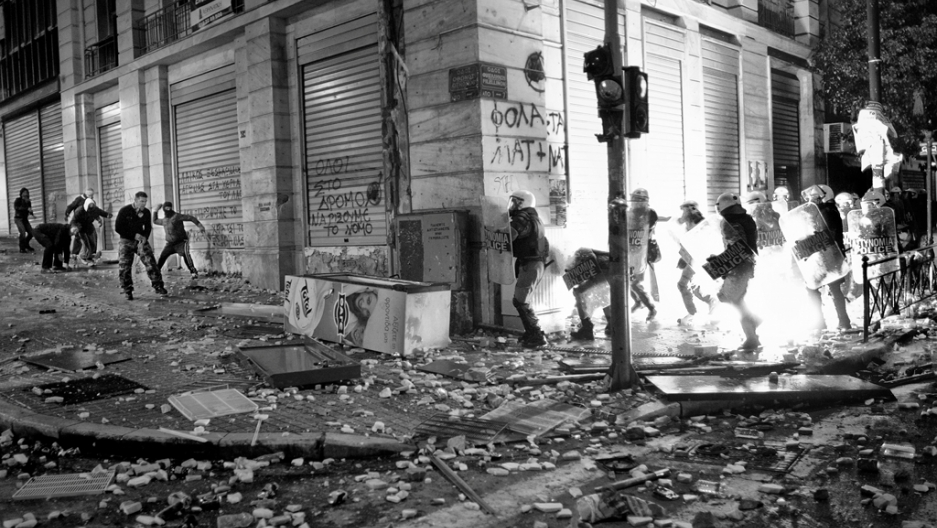 Young protesters throw Molotov cocktails at riot police during a protest against a new set of austerity measures. Violence on the streets no longer registers as important news.
Credit: Milos Bicanski
Share

ATHENS, Greece — A decade of catastrophic economic decline is changing the face of this country. Waves of austerity measures demanded by international lenders have slashed wages and welfare and suppressed growth since the government asked the European Union and International Monetary Fund for its first financial bailout in 2010. Last year, Greece overtook Spain as the country with the euro zone's highest unemployment rate, 26.8 percent.

The crisis was prompted by years of huge public spending increases, widespread tax evasion and concealed borrowing that left the country unable to pay its debts after financial crisis hit the global economy in 2008.

The private sector has been losing more than 1,000 businesses a week while the country has struggled with violent protests, nationwide strikes and a dramatic rise in homelessness. The financial woes have helped radicalize society and fueled the ascent of the extreme right-wing party Golden Dawn.

With business sentiment at its highest in two years, however, the government predicts the economy will begin to recover later this year. But that's small comfort for those Greeks trying to cope with whatever they can scrounge from government food programs, charities and dumpsters. Here's a look at how many are living.