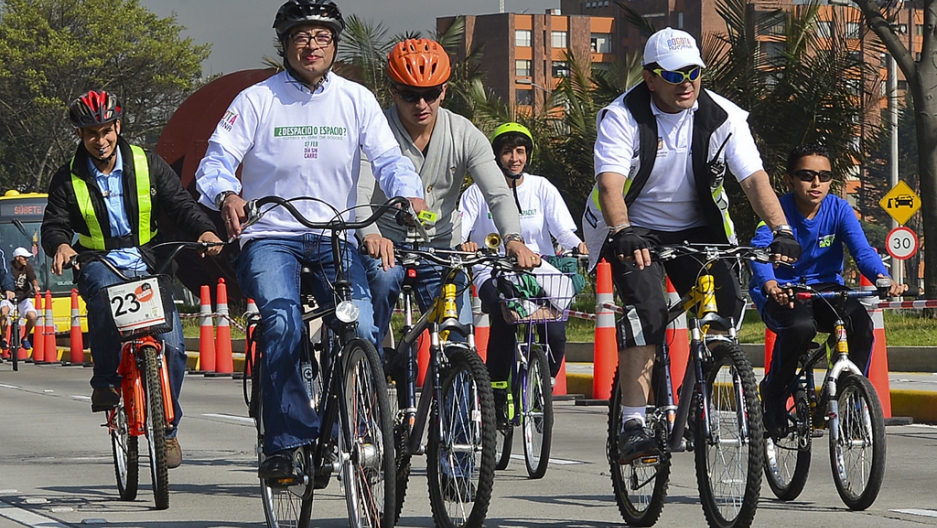 Bogota's Mayor Gustavo Petro (L) rides his bike among other people during Car Free day in Bogota, Colombia, on Feb. 7, 2013. Residents of Bogota are asked not to use their cars in an attempt to reduce environmental pollution.
Credit: Luis Acosta
Share

BOGOTA, Colombia — Pedestrians, cyclists, skateboarders, and even scooter aficionados came out in force on Thursday as private vehicles were banned from circulating in Bogota for the annual Day without Cars.

With several main drags entirely closed off to vehicular traffic, mothers pushed baby carriages and nurses pushed wheel-chair-bound patients down the middle of what are normally car-packed and exhaust-choked avenues.

“Rather than once a year, I think we should do this once a month,” said Manuel Pulido, a Bogota psychologist who was touring the city aboard his mountain bike.

Yet Bogota’s car-free experiment, which began in 2000 to promote eco-friendlier forms of transport, also highlighted the challenges still facing this city of 8 million. Although there were 1.5 million fewer vehicles riding in Bogota Thursday, somehow many areas of the city were still plagued by traffic jams, noise and exhaust, thanks to thousands of taxis, buses and motorcycles and an antiquated grid of pot-holed streets.

“The Day without Cars is a nice way to promote civic responsibility,” said Eduardo Behrentz, an urban mobility expert at the University of the Andes in Bogota. “But it didn’t reduce air or noise pollution.”

The idea of car-free days first cropped up amid the 1973 Arab oil embargo. But it didn’t take hold until the 1990s when cities in Iceland, England and France put a limited version of the concept into practice.

But on Feb. 24, 2000, Bogota became the first city to restrict the use of private vehicles throughout an entire metropolis for a day.

Enrique Penalosa, an avid cyclist who was then Bogota’s mayor, was alarmed that the time lost in traffic jams was doubling every five years and that modern cities were being overwhelmed by mazes of congested highways. He vowed that Bogota would avoid the fate of other urban areas. Rather than cities with highways, he said, they had come to resemble “highways with cities.”

Under Penalosa and several subsequent mayors, Bogota has made some progress.

Bogota residents voted in 2000 to make the Day without Cars an annual event. To promote cycling, the city built 235 miles of bicycle paths. For the past three decades, officials have been closing off main drags on Sundays for bikers and joggers.

Driving is discouraged. A system based on the last number of a car’s license plates is used to restrict the driving of private vehicles during rush hour. A mass transit system called TransMilenio, which consists of high-capacity articulated buses that have their own lanes as well as feeder lines, has inspired similar bus networks in other cities.

But amid population growth, an economic boom and — in some cases — poor planning, the end result has been more traffic.

The bike paths, for example, are full of obstacles like electric polls, are disconnected from one another, and often come to an end before cyclists have finished their commute.

The license-plate restrictions, in turn, appear to be backfiring. To beat the system, many people have opted to buy two used cars rather than a new one. Some families, in which both the husband and wife work, have four cars. According to City Hall figures, the number of private cars in Bogota has jumped from 958,000 in 2009 to about 1.5 million today.

A similar car-buying spree occurred in Mexico City when officials there introduced license-plate restrictions. When Beijing city officials announced tight new restrictions on car ownership in 2010 in response to traffic jams, it led to a pre-emptive surge in vehicle sales ahead of the new law.

Although the TransMilenio system is expanding, it is still far too small to serve the 80 percent of Bogota commuters who use mass transit. Many still board a vast fleet of buses that often spew black diesel smoke.

At one point on Thursday, police stopped 126 buses for inspection and 30 failed to pass gas emission standards. That helps explain why even on the Day without Cars, air quality in Bogota improved only slightly.

Several Bogota mayors have announced plans to build subways and electric trolley cars, but ground has yet to be broken. New roads have been built but they have failed to keep up with the surge in traffic. Meanwhile, some of the busiest avenues are rutted with potholes and clogged with illegally parked cars and impoverished recyclers who ply their trade in horse-drawn carts.

As a result, traffic moves through the city “with all the elegance of snails,” Vikhas Mehrotra, a University of Alberta professor, told the Freakonomics radio program in a recent episode dedicated to Bogota’s transportation gridlock.

Yet there were some small victories during the Day without Cars. Maria del Carmen Leon, a curbside vendor who sells cookies and candy on 15th Avenue, which was closed to all traffic, said it was a joy to work without the din of cars honking and buses backfiring.

Henry Ospino, an air-quality inspector driving an official City Hall van, noted that his usual 45-minute commute took just 15 minutes on Thursday. According to city officials, the speed of taxis and buses increased by 7 and 9 percent respectively.

Finally, the Day without Cars was a chance to promote staying off the streets altogether by working at home — which is still frowned upon at many Bogota companies. Pointing out that 4 million Bogotanos commute to work every day, Technology and Communications Minister Diego Molano said that telecommuting “would mean far less contamination and far more efficiency.”