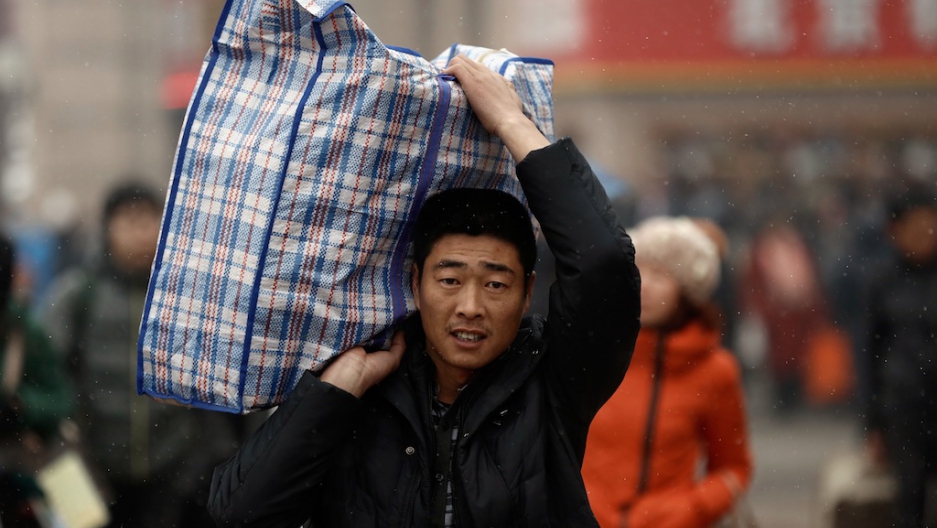 Migrant workers and the expanding middle class have increased political influence, and the government is looking to deal with rising income inequality in new ways.
Credit: Lintao Zhang
Share

It's entirely possible that China is doing a better job of combating income inequality than some Western countries, including the United States.

Although their methods are often said to be questionable, Chinese authorities have clearly made it a priority to soften the growing divide between the classes and cut down on corruption in business and political circles.

A recent survey of the Chinese economy focused specifically on income inequality found that the country's Gini coefficient (measured on a scale of 0 to 1, with 1 being the most unequal) was over .61, significantly higher than the government's official estimate, which put the number at closer to .47.

The survey, conducted by China's Southwestern University, also found that the gap between the very poor and the very rich is growing at an alarming rate in China, and that only 10 percent of households controlled 57 percent of the country's wealth.

In the past three decades, the number of billionaires has increased from one person in 1980 to over 110 people in 2012.

However, while the Chinese "one percent" grows, the educated middle class is expanding as well, and some migrant workers are able to send their children to school in cities for the first time.

Michael Silverstein, senior partner and managing director with the Boston Consulting Group, has written a book called "The $10 Trillion Prize" that focuses on the emerging economic powerhouses of China and India. He spoke with GlobalPost about the Chinese way of handling inequality, why it's such a large concern at the moment and what the future could be for the Chinese way of life.

Silverstein points to the emergence of engineering and factory work as the reason for the rapid growth of the middle class.

"In the past two decades, 350 million people have moved out of rural poverty into lower-middle class and upper-middle class because of factory jobs," said Silverstein.

Migrant workers make up the crux of the Chinese labor force, but they're apparently happy for the chance to make money and save it, at least according to Silverstein.

The migrant factory workers are not paid well. Their work hours are abysmal. The have not been allowed to formally unionize until very recently, or even converse with each other while on the assembly lines. There's a long way to go before the factories reflect international human rights standards.

But Silverstein points out that despite the workers' rights issues, the money is still more than they'd be making on rural farms, and the Chinese penchant for saving will allow the next generation to be better off that their parents were – the kind of "dream" American kids are so hard-up for these days.

Using the example of the manufacturing center of Shenzhen, Silverstein explained that how in 20 years, a factory based on migrant labor became home to suburban sprawl, schools, hospitals and a company called Huawei, which produces small parts for cell phones.

The government invested in Shenzhen's engineering capability, and today Huawei, which is located about an hour from Hong Kong, employs over 24,000 engineers in a modern, well-designed headquarters that exports telecommunications gear to other developing countries, and is one of the largest telecom switch-gear suppliers in the world. It's now a $30 billion company.

According to Silverstein, Huawei's workers save close to 25 percent of their income, a normal amount for the "frugal" and "prudent" working class that are determined to have a better life.

"Because they save, they have more money for capital investments, for housing, for transportation," says Silverstein. "The most important thing to see is that the consumers in China save. About half of the poorest households in China save about 15 percent of what lithe they have… while 40 percent of United States households save nothing."

In GlobalPost's new Special Report, "The Great Divide," longtime China correspondent Kathleen McLaughlin touched on the reality of inequality in economic status and privilege between migrant workers and the very rich.

“I think it will improve because a new generation of migrant workers are growing and they are unwilling to go back home,” said Li Linhui, a sociologist at Peking University, to McLaughlin. “Their voice will definitely be heard and their struggle will make a difference.”

More from GlobalPost: In Beijing, migrants remain in the shadow of China's rise to wealth

This rising class could challenge China's deeply entrenched culture of political oppression and the worry is that a push for democracy could destabilize the country's growing but unsteady economy.

So it makes sense that China announced a 40 percent raise in the minimum wage this week, began imprisoning and in some cases executing corrupt officials, and even put a ban on touting luxury.

From storefront windows to television commercials, it's again passé to seem rich.

"Narrowing the income gap is essential for ensuring social justice and social harmony," the State Council said in a statement posted on the central government website on Tuesday. "We need to raise income levels of the poor and adjust taxes on the excessively wealthy," it said, according to the Wall Street Journal.

According to reports from Reuters, the Communist Party's new initiative will compel companies (some of which made billions of dollars in profit last year) to hand over more money to the government, in an effort to better fund prisons, infrastructure, health care and education.

"I would say the government is working very hard to achieve social harmony and to reduce corruption, which is a major source of inequality," said Silverstein.

While these reforms may not be perfect, analysts are keeping a close eye on what might be coming next.

"A stronger social safety net is seen as crucial to China's economic rebalancing, freeing up household income for consumption," wrote Liyan Qi and William Kazer in the Wall Street Journal.

Silverstein also believes this is the way to handle the Great Divide, taking steps to reflect the will of the country in government, and in the factories, where workers have begun organizing unions without major ramifications.

"They believe they can have the will of the people spoken for with the one-party [system]," said Silverstein. "They elect a lot of officials from a lot of different geographies. They believe that their process of selecting leaders is democratic. American's conceptualization of democracy is unique, and while it works for me, others' ideas of democracy is not identical."

It may not seem like it now, but those middle class workers will be the driving force behind China's economic growth in the next few decades, Silverstein said.

For more of GlobalPost's reporting on income inequality around the world, check out our Special Report "The Great Divide: Global Income Inequality and its Cost."