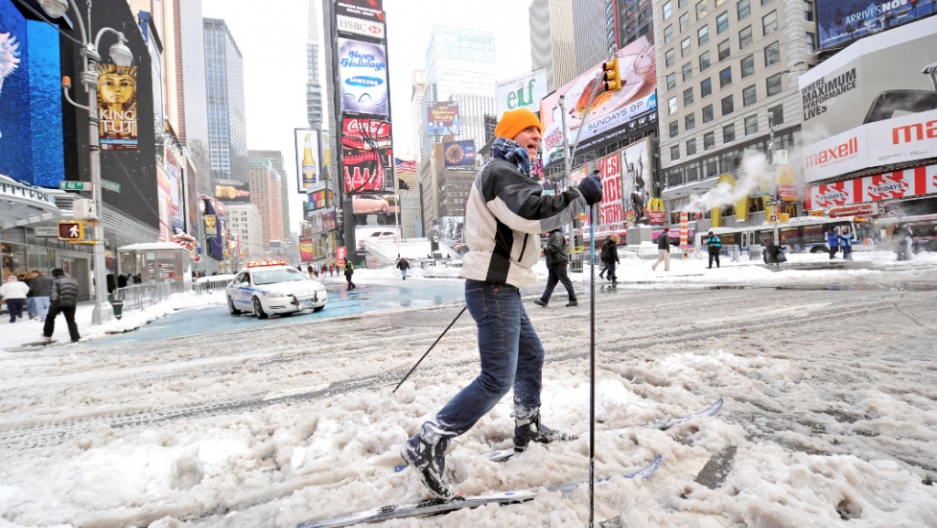 Forecasters are predicting the blizzard will be similar to one that hit New York in 2010 and dumped 16 inches of snow.
Share

NEW YORK — Weather authorities have issued a blizzard warning for New York City, Boston and other parts of New England as the Northeast braces for strong winds and heavy snowfalls.

From Pennsylvania to Maine, people rushed to stock up on food, shovels and other supplies, while road crews readied salt and sand, ABC News reported.

Ten to 14 inches of snow are expected to fall on Friday night into Saturday morning in New York, while Boston could get as many as two feet, CBS News reported.

Strong winds of up to 45 mph are also predicted, which has forced the cancellation of 2,600 flights so far. More cancellations are expected as the storm intensifies.

Connecticut's Bradley International Airport is expected to close down completely by Friday afternoon, according to Gov. Dan Malloy.

Forecasters said this could be a record blizzard.

"This one doesn't come along every day. This is going to be a dangerous winter storm," said Alan Dunham, meteorologist for the National Weather Service in Taunton, Mass.

"Wherever you need to get to, get there by Friday afternoon and don't plan on leaving."

The National Weather Service imposed the blizzard warning from 6am Friday to 1pm Saturday.

Air travelers have been warned to expect headaches at the airport when the storm hits.

The NWS has encouraged people to stay indoors and off the road as visibility could reach near zero with white-out conditions.

Parts of New York, including New Jersey which is still recovering from Hurricane Sandy, have been warned to expect power outages.

"We are taking this storm seriously," said Jerome Hauer, of Commmunity Homeland Security and Emergency Services, according to CBS.

"You should take this storm seriously. This is a very dangerous storm that will make travel from Friday night until Saturday morning almost impossible."

Sales pitches aside, this video from OpticsPlanet offers a good guide to preparing your blizzard survival kit:

[View the story "The Northeast livetweets #Nemo " on Storify]