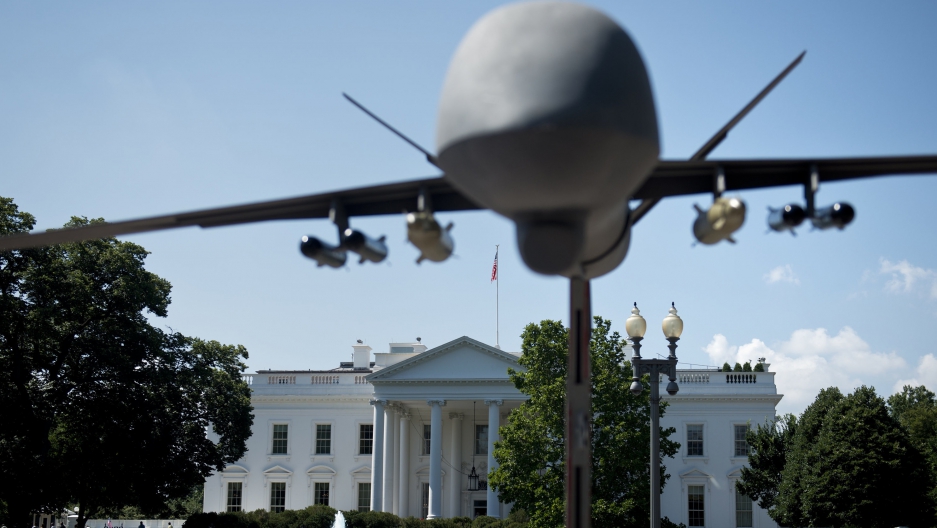 A model of a drone on Pennsylvania Avenue outside the White House.
Credit: Brendan Smialowski
Share

BUZZARDS BAY, Mass. — It's been a bad week for Washington’s image.

First, a leaked Justice Department memo provided a handy legal framework to justify the US government’s killing of its own citizens without even a semblance of due process. Then a report by a respected international body alleged, in excruciating detail, gross violations of international law by the United States and its allies in a process known as “extraordinary rendition.”

And Tuesday night, The New York Times website revealed the location of a previously secret drone base in Saudi Arabia from where the United States launches strikes against Al Qaeda militants inside Yemen — including US citizens.

The revelations come at a particularly sensitive time for Barack Obama. As he heads into his second term, the president is crafting a new foreign policy agenda with a brand new team. Confirmation hearings for Obama's pick for the Pentagon were very contentious, and the nominee, Chuck Hagel, hasn't yet been confirmed.

Another key post, head of the Central Intelligence Agency, is also likely to be hard going for the White House, with John Brennan set to face the Senate Intelligence Committee on Thursday.

The Justice Department’s “white paper” — which was given to the Senate Intelligence and Judiciary committees last year and leaked this week to NBC News — lays out the circumstances under which the executive branch can order the targeted killing of a US citizen outside a battleground area.

There are three conditions specified: an “informed, high-level official” must decide that the targeted individual poses an “imminent threat” of violent attack against the United States; capture must be deemed “infeasible”; and the operation must be conducted “in a manner consistent with applicable law of war principles.”

But in a remarkable contortion of logic and syntax, any real limitations evaporate like a puff of smoke.

The word “imminent,” as defined by Merriam-Webster, means “ready to take place.” That is much too confining for the Justice Department, however; after all, according to the memo, “the US government may not be aware of all Al Qaeda plots as they are developing, and thus cannot be confident that none is about to occur.”

So a “broader definition of imminent” is required. In effect, that means no information about a specific plot or action is needed to land an individual on Washington’s “Kill List.”

The argument is far from academic: To date, three US citizens are reported to have been killed in targeted drone strikes. Anwar al-Awlaki, a US-born imam closely associated with Al Qaeda, was killed in Yemen on Sept. 30, 2011. Samir Khan, a US citizen from North Carolina, died in the same drone strike, and Abdulrahman al-Awlaki, Anwar’s teenaged son, was killed a few weeks later, also in Yemen.

The strike reportedly originated at a US drone base inside Saudi Arabia; the administration had sought to keep the base secret, but media including The New York Times and The Washington Post have just made its location public.

White House officials had requested that the media hold the story, citing worries that revealing the location would undermine a hunt for an Al Qaeda affiliate and risk damaging ties with Saudi Arabia, The Washington Post said.

Nasser al-Awlaki, Anwar’s father, has filed a wrongful death suit against the US government.

In December, the Obama administration urged a federal court to dismiss the lawsuit, saying the issue was best handled by the government’s “political branches” rather than the judiciary.

The suit is unlikely to get far, but questions about the legality of the killings remain. Another US citizen, Al Qaeda spokesman Adam Gadahn, is on the FBI’s “Most Wanted Terrorists” list.

Congress, for one, is concerned about executive overreach. A bipartisan group of senators has sent a letter to the president asking that “any and all legal opinions that lay out the executive branch’s official understanding of the president’s authority to deliberately kill American citizens” be made available to the legislature, Politico reported.

The senators’ language was genteel, but underneath was a thinly veiled threat.

“The executive branch's cooperation on this matter will help avoid an unnecessary confrontation that could affect the Senate's consideration of nominees for national security positions,” they wrote.

Unless the Obama administration is more forthcoming than it has been, the president's nominee for CIA director could face an uphill battle.

John Brennan has been an outspoken advocate of the CIA’s drone program, and as the White House counterterroism adviser was actually in charge of crafting the "kill list."

Brennan will doubtless undergo rigorous questioning on the targeted killings of US citizens when he faces the Senate Thursday.

The white paper has been termed “chilling” by the American Civil Liberties Union.

“Some of the white paper's key legal arguments don't stand up to even cursory review,” wrote Jameel Jaffer, the ACLU’s deputy legal director, in a blog posted on the group’s website.

That lack of accountability is something the Open Society Foundation (OSF) laments in its report “Globalizing Torture: CIA Secret Detention and Extraordinary Rendition,” released Tuesday.

In its report, the OSF discloses details of an extensive program of extra-legal detention and transfer of terror suspects to countries where there was a clear possibility that they would be tortured.

In this effort, which, as the report alleges, was a gross violation of the UN Convention Against Torture, the United States was aided by a staggering 54 countries, from Europe to Asia to Africa to North America.

“By engaging in torture and other abuses associated with secret detention and extraordinary rendition, the US government violated domestic and international law, thereby diminishing its moral standing and eroding support for its counterterrorism efforts worldwide as these abuses came to light,” reads the report’s executive summary.

Extraordinary rendition — in which terror suspects are secretly detained and transferred to third-party nations for interrogation — is closely associated with the administration of President George W. Bush, which instituted the practice in the immediate wake of 9/11. In the intense climate following the attack on the World Trade Center, normal rules simply ceased to apply.

The US embraced “enhanced interrogation techniques” which, as explained by then Assistant Attorney General Jay Bybee, did not amount to torture.

“In a memorandum dated August 1, 2002, then Assistant Attorney General Jay Bybee opined that physical abuse would not amount to torture unless it inflicted pain of a level associated with organ failure, impairment of bodily function, or even death,” writes OSF.

But even torture could be justified, US anti-torture statutes not withstanding, wrote Bybee, in what became known as his “torture memo.”

Restrictions on interrogation techniques would “represent an unconstitutional infringement of the president’s authority to conduct war,” and “necessity or self-defense” could be used to justify interrogation methods that would seem to violate US law.

Subsequent attempts to back away from Bybee’s memo were unconvincing, as long as extraordinary rendition kept torture very much in the arsenal of weapons to be used against terror suspects.

The Obama administration has repudiated torture, but has not stopped extraordinary rendition. Instead, it relies on “diplomatic assurances” that detainees will not be abused. Moreover, the White House continues to withhold information about the abuses that have occurred.

“The time has come for the United States and its partner governments to own up to their responsibility for secret detention and extraordinary rendition operations,” urges the OSF. “If they do not seize this opportunity, chances are that the truth will emerge by other means to embarrass them.”

Indeed that is already happening. The European Court of Human Rights is about to declassify reports about secret prisons in Poland, a prospect that makes the Polish government distinctly uncomfortable.

As the "war on terror" shifts focus, the US will have its work cut out for it to reclaim the moral high ground. As the German philosopher Nietzsche once said: “Battle not with monsters lest ye become one, and as you gaze into the abyss the abyss gazes also into you.”