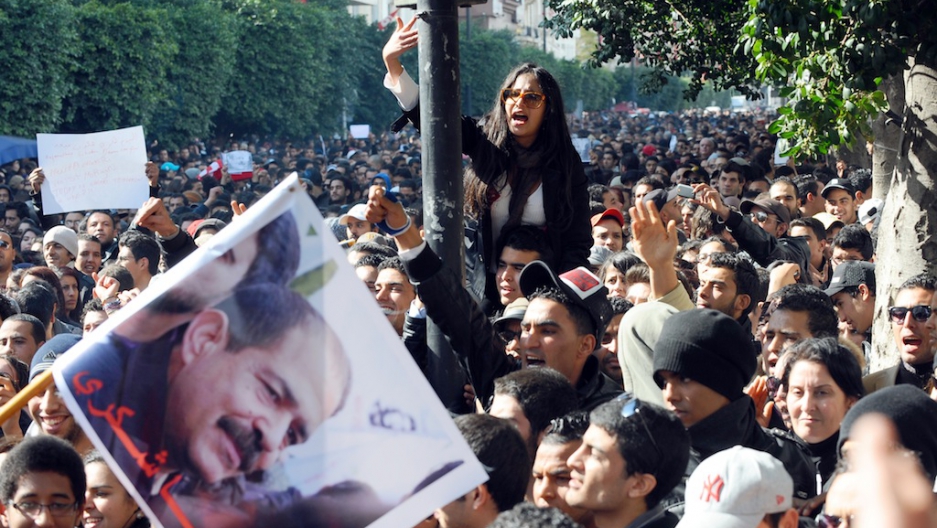 Protesters shout slogans outside the Interior Ministry to protest the death of Chokri Belaid (featured on the poster), who was shot dead on Feb. 6, 2013 in Tunis.
Credit: Fethi Belaid
Share

Prime Minister Hamadi Jebali said Wednesday he will dissolve Tunisia's government, after the shooting of Tunisia's secular opposition leader outside his home sparked wide protests in the capital and elsewhere.

Chokri Belaid was shot outside his home and soon died of his wounds at a nearby hospital, his brother confirmed to Al Jazeera. During a speech later in the day, Jebali called for new elections.

"After the failure of negotiations between parties on a cabinet reshuffle, I decided to form a small technocrat government," Jebali reportedly said.

Thousands flocked to protest outside the interior ministry in Tunis, the capital, after the assassination.

The country's opposition has earlier called for a nationwide strike to protest Belaid's murder, and had threatened to pull out of the Constituent Assembly, which is locked in a battle to draft a new Tunisian constitution, BBC News said.

Many of the protestors chanted, "Shame, shame Shokri [sic] died," "The government should fall," and "Where is the government?" Reuters reported. In Sidi Bouzid, almost four thousand people took to the streets, where they lit tires on fire and threw stones.

The offices of the government, run by the Islamist party Ennahda, were also attacked. The Telegraph reported that demonstrators blamed Ennahda for failing to prevent the growth of fundamentalism.

Tunisian President Moncef Marzouki, traveling in France, cut short his visit and canceled a planned trip to Egypt after news of the killing.

"There are many enemies of our peaceful revolution. And they're determined to ensure it fails," Marzouki said in a speech to the European Parliament, calling Belaid a "long-standing friend" and adding that his "hateful assassination" was a threat, BBC News reported.

"This is a letter being sent to us that we will refuse to open," President Marzouki said.

Belaid was secretary general of the leftist Democratic Patriotic party. He was shot in the head and neck as he left his home.

The Associated Press cited the Tunisian government as saying Belaid was killed amid tensions over extremism. He was a critic of Tunisia's leadership, the AP wrote, targeting the dominant moderate Islamist party Ennahda.

His brother, Abdelmajid Belaid, reportedly told journalists: "My brother has been assassinated. I am beyond despair."

According to AFP, police fired tear gas at protestors in Sidi Bouzid. In Tunis, some protestors charged the wire fences surrounding the interior ministry.

In front of the Ministry of the Interior in downtown #Tunis now #ChokriBelaid #Tunisia twitter.com/Tunisia_Live/s…

The AP pointed out that Tunisia is still afflicted by "social and religious tensions" since the ouster of longtime dictator Zine El Abidine Ben Ali in the Arab Spring protests.