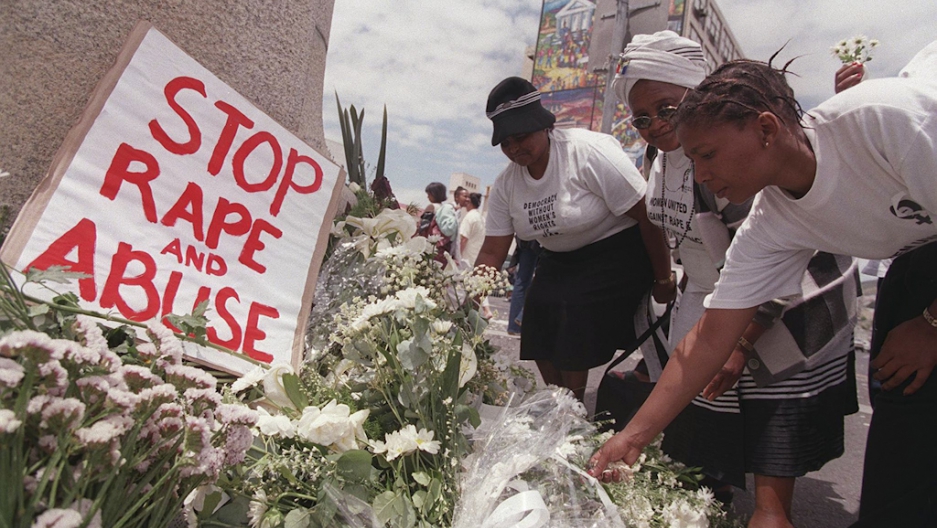 Women place white flowers outside parliament during a demonstration in Cape Town on the International Day for the Prevention of Violence against Women. South Africa has one of the highest rates of rape in the world.
Credit: ANNA ZIEMINSKI
Share

The teenage victim of a brutal gang rape in South Africa died Wednesday of her injuries, according to Reuters.

On Thursday, local reports said two men had been arrested in connection with the crime.

Seventeen-year-old Anene Booysen was brutalized in a Saturday attack that left her in critical condition after being gang-raped and cut open from her genitals to her stomach, said Reuters.

Police said a second man was arrested on Wednesday.

Booysen's attackers left her because they thought she was dead — and she nearly was, passing away on Wednesday at a local hospital, according to South Africa's EyeWitness News. The crime took place in the town of Bredasdorp, about 80 miles east of Cape Town, acoording to local media.

Phumla Williams, the acting CEO of the government's Communication and Information Systems, said Thursday, "It is worrying that rape and abuse seems to have become a norm. This will not be allowed to continue," the SAPA reported.

Rape is widespread in South Africa — one woman is reportedly raped there every 17 seconds — lessening the shock value even in graphic cases like Booysen's, activists told Reuters.

The ruling African National Congress' Women's League responded to the news by calling for more action to combat rape, saying "a few women's NGOs can no longer be the lone voices crying out against rape," according to a statement cited by Reuters.

As of 2000, South Africa had the highest rape rate of all 120 Interpol member nations, said Reuters.

South African authorities are said to be investigating the Booysen case. She reportedly identified one of the people who attacked her before she died, said Reuters, while EyeWitness said that person has been arrested.