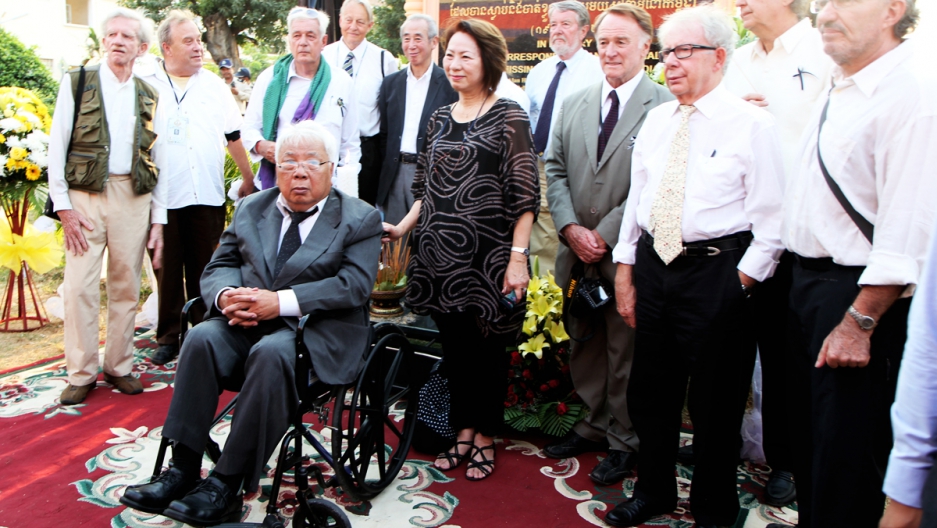 Veteran journalists from the 1970 to 1975 war in Cambodia gather in Phnom Penh to honor their fallen colleagues on January 6th.
Credit: Faine Greenwood
Share

PHNOM PENH, Cambodia — Many of the most prominent surviving correspondents who covered Cambodia's civil war gathered in Phnom Penh on Wednesday for the unveiling of a memorial to the "at least" 37 journalists who perished on Cambodian soil between 1970 and 1975.

Chhang Song, a former information minister under the deposed 1970s Cambodian leader Lon Nol, was also on hand to speak at the ceremony, as the "old hacks," as some of them called each other, gathered to remember their fallen.

"Thirty-seven have died, but they have not died in my heart," Song, who is now wheelchair-bound, said of the deceased correspondents.

"I have carried the names, the faces, the words of these people who died for their profession."

"The thirty-seven names here represent the core of our craft, our raison d'etre, why we did it and still did it," said Page, who carried his camera around his neck as he spoke.

Those honored included Japanese journalist Koki Ishiyama of Kyodo News, French photographer Gilles Caron, Sean Flynn of the US, and many other luminaries of the profession.

Read more from GlobalPost: US journalist missing in Syria

The back of the memorial has been left open so the families and friends of the deceased can post photographs and remembrances of the dead, the information minister said.

Veteran journalist Don North said at the memorial that his Buddhist friends had told him: "In this life, a person dies twice: once when the body gives up, and once when their friends forget them."

"We really felt that strongly," said North of his involvement with the memorial, explaining that many of his Vietnam-war era colleagues were entering old age.

"We miss our friends who crossed the river, but we hope they're doing some recon for us, and will pop some smoke to guide us in," North added, with a smile.