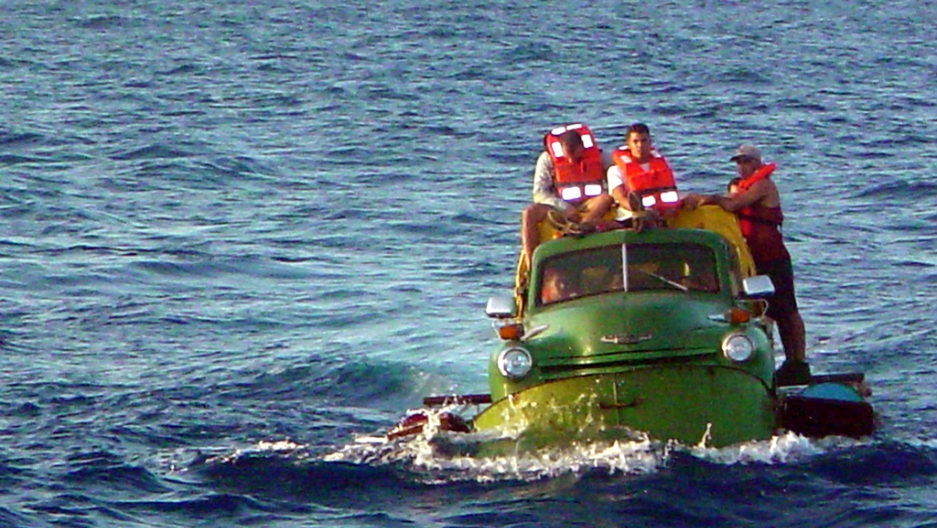 Cuban migrants trying to reach the US coast in Florida ride a makeshift boat made out of a 1951 Chevrolet truck, July 16, 2003.
Credit: Gregory Ewald/ US Coast Guard
Share

HAVANA, Cuba — For decades communist authorities in Havana have railed against the Cuban Adjustment Act, the US immigration law that essentially grants automatic refugee status to any Cuban who reaches American soil.

The act has enabled successive waves of Cuban exiles and immigrants to settle in the US since it was adopted in 1966, bestowing benefits and privileges enjoyed by no other group.

Cuba's state media call it “The Murderous Law,” likening the policy to an instrument of low-intensity sabotage that siphons off Cuba's educated professionals while encouraging others to attempt risky voyages across the Florida Straits.

None of the Cuban protests ever managed to affect the policy. But now, after nearly 50 years, the Castro government may have finally figured out a way to force the act to change — by making a Cuban adjustment of its own.

Last month immigration authorities implemented a broad travel reform that eliminated the need for most island residents to obtain an “exit permit” to leave, while also extending to 24 months the time Cubans can remain abroad without losing their residency status.

Castro officials said the purpose of the reform was to facilitate ease of travel and movement for island residents and the roughly 2 million Cubans living abroad, a majority of them in the United States.

It was also a major step toward creating a new kind of socialist laborer: the migrant worker, who earns money abroad to spend and invest back home in Cuba.

And it is precisely that type of circular movement that has unnerved Cuban American lawmakers in the US. They now appear to be considering what was once unthinkable: altering the Cuban Adjustment Act.

“If people come to this country seeking refuge and then begin traveling back to Cuba 10 to 12 times a year, it becomes difficult for us to return to Washington and justify the special status that Cubans have in comparison with the rest of the population,” said Sen. Marco Rubio, R-Fla. “That endangers the Cuban Adjustment Act.”

Other anti-Castro stalwarts in Congress have made similar declarations in recent weeks, threatening punitive measures against Cuban immigrants who establish residency in the US then travel back to the island.

Each year more than 10,000 Cubans are put on a path to a green card by reaching the US border with Mexico, or landing on south Florida beaches by raft or in a smuggler's speed boat. Others enter with tourist visas and then opt to seek residency through the Cuban Adjustment Act.

The US Consulate in Havana also issues up to 20,000 immigration visas each year under accords reached during the “rafter crisis” during Bill Clinton's presidency.

But none of these Cubans are required to demonstrate political persecution.

Since announcing their travel reforms, Cuban immigration officials have openly acknowledged that island residents now obtain US residency under the terms of the act while also preserving Cuban residency and their property back home.

And they weren't calling it “The Murderous Law.”

To Castro opponents, it's as if they're encouraging Cubans to game the system.

Rep. Ileana Ros-Lehtinen (R-Fla.) said the act “isn't designed to be a mechanism through which a person says 'I'm Cuban so I want to travel back and forth between the United States and Cuba, and take vacations on the island.'”

Such statements are illustrated by a peculiar scene that plays out each day in a newly renovated terminal at Havana's Jose Marti International Airport.

There, plane loads of Cuban and Cuban American passengers arrive from Miami, their suitcases and shrink-wrapped duffel bags bursting with gifts for relatives or goods to sell on Cuba's black market.

More from GlobalPost: Cuba opens the gates, hoping for a trickle, not a flood

The 45-minute trip costs more than $400, but tourism operators say there is so much pent-up demand that seats are selling out more than a month in advance, and they can't add new flights fast enough.

As many as 18 flights a day now arrive to the island from the US, making it the second-largest source of visitors to the island (after Canada), despite the 54 years of hostilities between the two countries.

Unfettered American tourism to Cuba remains illegal because of US trade sanctions. But Barack Obama's administration has lifted restrictions on anyone with relatives on the island, meaning most Cuban Americans can return as often as they wish.

And many do — especially those who have arrived in the US more recently and still maintain close ties to Cuba. Some return once a year to visit relatives, but it has become increasingly common to encounter Cuban migrants returning for things like discount dental care, Santeria (an Afro-Cuban religion) ceremonies and even to invest in start-up businesses and the budding real estate market.

There is one thing these travelers have in common: They do not behave like prototypical political refugees.

Yet their engagement with the island is viewed by the Obama administration, and many in the Cuban American community, as the kind of people-to-people contact that will change Cuba from the inside by breaking years of isolation and the Castro government's strict ideological controls.

According to Cuba analyst Phil Peters, the problem with Rubio and others' insistence is that most Cubans who arrive do not claim to be political refugees in need of protection from persecution. Such claims are projected upon them.

“Rubio and Ros-Lehtinen are accusing their constituents of being hypocrites, based on a claim that these immigrants have never made,” Peters argued.

More from GlobalPost: Can Kerry make friends with Cuba?