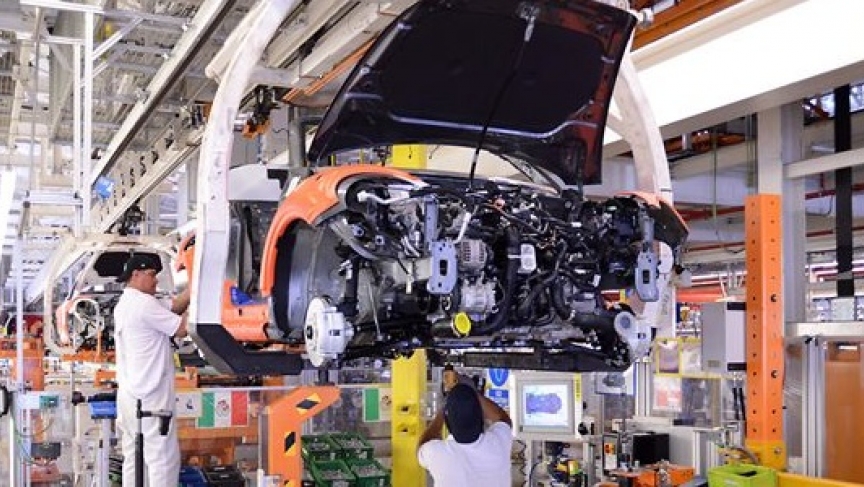 If you've ever been to Mexico City, chances are you've sat in an old Volkswagen Bug taxi, painted in muted red and gold, stuck in Mexico City's notorious traffic.

"Here we call them 'Donkeys,'" says Victoriano Luna, a taxi driver who has been driving a Bug for 32 years. "A horse can run fast, but it doesn't endure. A donkey does endure, just like this car."

Volkswagen first came to Mexico in 1967, when it opened a plant in Puebla, a few hours drive from Mexico City. For decades, the Bug was the biggest-selling car in the country.

Today, the Peubla plant has expanded to become the largest auto factory in North America, employing 18,000 people. It's a state-of-the-art facility full of industrial robots and blinking computer equipment. The plant has the capacity to produce 2,500 cars a day, in popular models such as the Jetta and Golf.

After rolling off the line, the cars are packed into trains and shipped off to retailers. Most of them are sold abroad. Mexico is now the eighth biggest auto producer in the world, as well as the world's fourth biggest exporter, according to the Mexican Automotive Industry Association.

In 2012, the country produced almost 3 million cars, a national record. Experts say those numbers are on track to keep growing.

"Mexico is becoming quite an automotive powerhouse," says Thomas Karig, a vice president at Volkswagen Mexico. Karig says Mexico is an attractive place for car companies to set up shop for several reasons: a great location for exporting to North and South America, an open trade policy, and experience in the work force.

Last September, Audi, a Volkswagen subsidiary , announced the construction of a new plant nearby. They'll be assembling the luxury Q5 SUV. Eduardo Solís, president of the Mexican Automotive Industry Association, says it's a watershed moment for the country.

"There is an important element here where Mexico is, currently in the automotive industry, associated with good quality, with good products," says Solís. "We have been scaling up in the value chain."

Until recently, Mexico's economy was based on low-paying, labor-intensive industries like textiles. About a decade ago, those industries started fleeing to China or Central America, where it's even cheaper to operate. But now, Mexico is growing big-time in better-paying industries, like autos, aerospace, and technology, which require better-educated workers.

Hector MuÃ±oz, a 48-year-old technician at Volkswagen, is a living example of that change. MuÃ±oz comes from a family of street vendors, and scored a job at Volkswagen after an uncle got him interested in fixing up cars.

After 20 years working on the VW line, he makes 12,000 pesos a month. That comes out to only about $30 US a day, but its six times minimum wage in Mexico, putting him squarely in the country's middle class. Thanks to this job, he's been able to put his kids through college. Two of them are now engineers, a fact he's really proud of.

"Before there weren't as many opportunities as there are now," says MuÃ±oz. In my case, being at Volkswagen has really encouraged me to push my kids to learn more, to get better educations."

There are a lot of others like MuÃ±oz. According to the World Bank, 17 percent of Mexico's population joined the middle class between 2003 and 2009, now making up almost a quarter of the population.

But there's a long way to go — half of Mexico still lives below the poverty line. Victor Piz, editor of Mexico's chief financial newspaper El Financiero, says those people are being left out this high-tech boom.

"I think the main problem in Mexico is the distribution of revenue coming into the country," says Piz. "None of it goes into the pockets of Mexico's poor. This wealth doesn't matter to them because they're not receiving any benefit from it."

Piz also warns that Mexico could have a problem sustaining its recent growth — almost 4 percent for two straight years — because it relies too heavily on one trading partner, the US. Mexico has free trade agreements like NAFTA with 44 countries, but still overwhelmingly exports to its neighbor to the North.

Today, Mexico City traffic is no longer a sea of VW Bugs. There are the gleaming Lexuses of the wealthy, and the Nissans of the country's middle class — not to mention the mini-buses that transport the working poor. But taxis are still being made in Mexico. New York City's brand new taxi fleet is currently in production at a Nissan plant in Cuernavaca.

This story was produced in collaboration with reporter Javier Risco and Round Earth Media's Mexico Reporting Project.