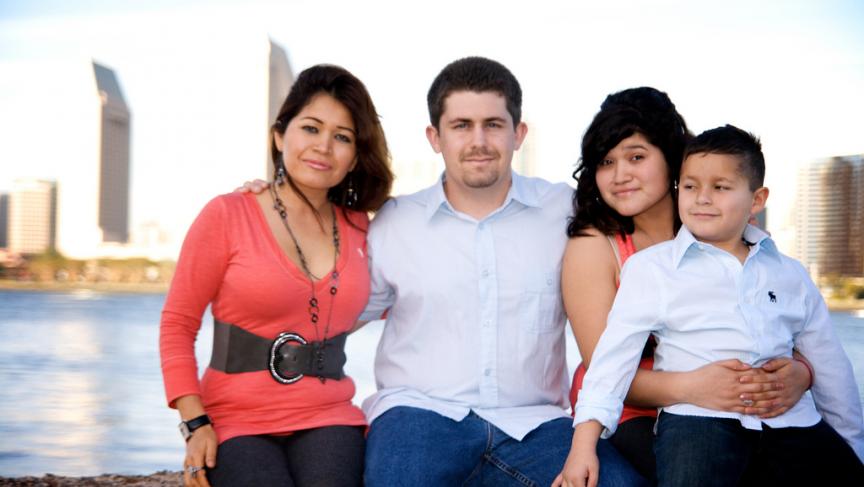 Maythe and T.J. Barbour, married since 2002, sit for a portrait in San Diego with their two children, Nidia and Lucas. Maythe was deported in 2011 and barred from entering the US for 20 years. She now lives in Tijuana with Nidia. T.J. and Lucas visit on w

As Washington debates immigration reform, much of the focus is on proposals that would offer illegal immigrants a path to citizenship. Here, we focus on one pathway that many people think is already there: That is, the notion that a non-citizen even if undocumented, receives immediate legal residency by simply marrying a US citizen. Not so simple, under a 1996 immigration law. Part of that law was aimed at bogus marriages, where a couple would simply pretend to marry for love, when the only goal was to get citizenship for the undocumented party. But the law has also ended up penalizing legitimate couples, forcing them to live apart, split by a maze of restrictions and penalties. Reporter Amy Isackson, in collaboration with the California Report and the Center for Public integrity, brings us one family's story.

It is a typical Monday morning in the Barbour household. T.J. and his wife, Maythe, take turns at the bathroom sink, they make coffee, and head out to the car. And after putting T.J. puts their 10-year-old son Lucas into the backseat, he does something unusual for most families.

He lies down on the pavement and looks underneath his car. Using a flashlight, he inspects the vehicles underside for packets of drugs. Recently, drug smugglers have targeted frequent cross-border commuters, like T.J., attaching packets of drugs to unsuspecting vehicles in order to get their illicit goods into the United States.

Once that routine is done, the Barbours pull away from their Tijuana apartment. It is 3:30 a.m. They race through the dark to get to the San Ysidro border crossing before the line stacks up. T.J. has to get to work as a software engineer in San Diego, and Lucas cannot be late for fourth grade.

Maythe drives so they can sleep.

Then, when the family is just a few cars away from the border crossing, Maythe hands the wheel to T.J. She walks to a nearby bus stop alone and heads home in Tijuana.

Maythe and T.J. married in San Diego a dozen years ago.

But Maythe is barred from the US.

The Barbours are just one of thousands of families stuck apart like this because of a little-known rule included in an immigration reform package passed by Congress in 1996. The rule was designed to discourage undocumented immigrants, like Maythe, from staying in the US, as well as thwart fraudulent marriages by individuals hoping to receive legal residency.

It can happen like this: An undocumented immigrant spouse returns to his or her home country for a mandatory interview at a US consulate to complete the green card application process. But if that person entered the US illegally and lived here for more than six months, he or she is barred from the US for three or 10 years, or life, depending on the circumstances.

In March, a change ordered by President Barack Obama will bring some relief. It lets undocumented spouses to apply for what's called a hardship waiver before they leave the United States for the mandatory interview, instead of after they have left the US, as the policy stands now. The change is designed to reduce the time that couple and families are separated and remove some of the uncertainty from the process.

But the change will not help the Barbours and thousands of couples like them who still will not qualify for hardship waivers.

That is because when Maythe crossed the border in 1997–she crossed twice. The Border Patrol caught her on her first try. That disqualifies Maythe from getting a waiver, along with many other undocumented immigrants who have followed a similar path.

Further, the change is not retroactive. Maythe's case cannot be revived.

Maythe says that, living in the mountains in Mexico, she did not know about the intricacies of US law and how crossing the border twice in the late 1990s would impact her entire life. She arrived here as a single mother, with her daughter in tow, wanting the best for her child.

And, when Maythe got work at a Burger King in San Diego and fell in love with her husband, T.J., who is a US citizen, the couple thought that marriage would solve immigration issues.

"I was aware of her immigration situation," T.J. said. "And I, like most people, was under the impression that she gets married to me, we're set."

Not so. Maythe's past with the Border Patrol meant she was out of luck.

Instead of risking years of separation, the Barbours, like many other families, went underground to stay together. Then, Maythe was caught in 2010. A policeman pulled her over for driving too slowly. He handed her over to Immigration and Customs Enforcement.

Maythe fought her case from an immigration detention center for five months. She lost and was deported to Tijuana.

And here is where our story began, with the Barbour family's new reality.

Maythe stays in Tijuana, separated from T.J., her kids, and her family in southern Mexico. It takes a toll. Every day the same image haunts Maythe at 3 p.m. That's when her son Lucas gets out of school in San Diego.

"Lucas would climb the same tree every day after school. He'd say, 'Catch me if I fall!' It's terrible for me to think that I'm not there," Maythe said.

Seven Republican Congressman who support the immigration bars declined interviews for this story. However, they have publicly criticized President Obama for circumventing Congress to relax immigration rules.

It is unclear if comprehensive immigration reform will address such penalties.

Wayne Cornelius, an immigration expert at the University of California San Diego, hopes it will. "The only thing that is going to allow people to adjust their status in the US is a broad legalization program, the type which we had back in 1986 to 1988," Cornelius said.

Meanwhile, Maythe Barbour is so lonely in Tijuana she sells cosmetics door-to-door just to talk to people during her 20-year bar from re-entering the US.

The Barbours have also turned to religion and have become Jehovah's Witness. T.J. likes the religion's concept of a celestial government, which is framed as fair and just.

It is treatment, T.J. says, that he has yet to find in the United States.