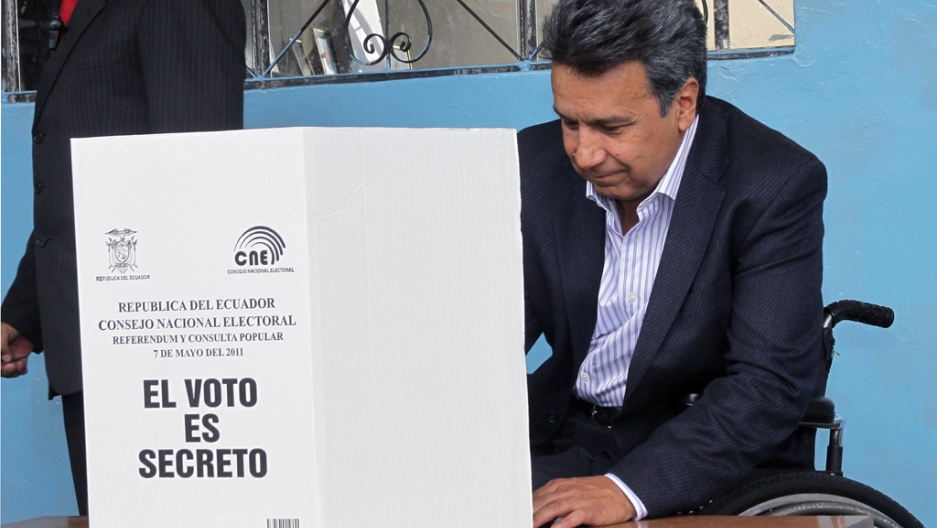 Ecuadorean Vice President Lenin Moreno casts his vote in Quito on May 7, 2011. Moreno was elected vice president in 2006, but last month he became acting president when President Rafael Correa took a leave of absence to campaign for re-election in Ecuador’s Feb. 17 vote.
Credit: Juan Cevallos
Share

QUITO, Ecuador — Like many upper-class Ecuadoreans, Lenin Moreno rarely noticed people with disabilities. A successful businessman and politician, he was too busy being an overachiever.

All that changed in 1998. After buying bread at a Quito grocery store, Moreno was approached by gunmen in the parking lot. Even though he gave up his wallet and keys, the carjackers shot him in the back, leaving Moreno paraplegic.

Now, a dapper Moreno, 59, is sitting in a wheelchair at the colonial Carondelet presidential palace in Quito as newly arrived foreign dignitaries present him their credentials. Moreno was elected vice president in 2006. But, last month, he became acting president when President Rafael Correa took a leave of absence to campaign for re-election in Ecuador’s Feb. 17 vote.

That makes Moreno the world’s highest-ranking government official in a wheelchair. By nearly all accounts, he has used his power wisely. A fierce advocate for people with mental and physical disabilities, Moreno has helped turn Ecuador into one of Latin America’s most advanced countries for disabled people.

His work “is by far one of the best things this government has done,” said Monica Almeida, an editor at El Universo, one of the country’s largest newspapers. “The vice president is the nice face of this government.”

When Moreno first received the vice presidential sash, the government didn’t even know how many disabled people lived in Ecuador. It was rare to see people in wheelchairs in public. In rural areas, people with severe disabilities were treated as outcasts and hidden from society. Some were even confined to sheds and chicken coops.

But Moreno has tried to upend this grim scenario. Using profits from the OPEC country’s oil boom, the government is installing wheelchair ramps all over Quito — the capital — and other cities. People with severe disabilities now receive $300 monthly stipends from the government. Moreno helped draw up a law that compels Ecuadorean companies to set aside at least 4 percent of jobs to people with disabilities.

“We are going to make sure that not a single person with disabilities goes unattended,” Moreno said in a recent speech. “This is a revolution.”

This campaign on behalf of the disabled includes providing free artificial limbs to poor Ecuadoreans. Imported prosthetics can cost well over $5,000. However, about 90 prostheses are being produced every month at three Ecuadorean workshops and are then distributed to people who once hobbled around on crutches or learned to get by with just one arm.

In the wing of a government hospital in Quito on a recent afternoon, several workers used saws and power sanders to put the finishing touches on new limbs as project manager Jorge Costa looked on. He said about 300,000 people are waiting for prostheses.

“The idea is to reinsert them into society,” he said. “With these limbs, they will become more motivated to find work.”

One person who has made this transition is Sarita Carlosama. A disease affecting her spinal cord left Carlosama paraplegic 20 years ago. Back then, she was studying to be a doctor at a Quito university. But she quit because there was no wheelchair access to the fifth-floor classrooms.

Carlosama ended up studying administration at a business academy where the classrooms were on the first floor. After graduating, finding a good job was tough. But following passage of the new 4 percent law to bring disabled people into the work force, Carlosama was hired by an oil company where she works as an accountant.

Now, her self-esteem is soaring. Three days a week she rises before dawn to practice tennis in her wheelchair before going to work. Not surprisingly, she’s full of praise for Vice President Moreno.

“He has achieved so much,” she says. “But even if he hadn’t done anything, just the fact that the vice president is in a wheelchair changes perceptions about disabled people.”

Ironically, Moreno nearly gave up after he was shot. He suffered intense pain and bouts of depression and was bed-ridden for four years. But he discovered alternative medicine, including so-called laughter therapy.

Laughing releases endorphins that many doctors believe can help distract the mind and relieve pain and stress. As he watched comic films and memorized jokes, Moreno slowly improved. Working from his wheelchair, he went on to write five books on laughter therapy, including “Don’t Be Sick, Laugh,” and “The Best Jokes in the World.”

He once said: “Angels can fly because they don’t take themselves too seriously.”

Moreno formed a foundation to integrate humor into everyday life and became a motivational speaker. He even dabbled in music and became a pretty good vocalist. Later, he was named the director of the country’s institute for people with disabilities and was selected as Correa’s running mate in the 2006 election.

Xavier Torres, a close Moreno aide, said that over the past seven years, annual government spending on programs for disabled people has jumped from $2 million to $150 million. In addition, Ecuador has been called on by many Latin American governments for advice on policies for disabled people.

Moreno, who was short-listed for last year’s Nobel Peace Prize, surprised many Ecuadoreans by announcing he would not seek re-election this year. But he’ll likely remain in the public eye: Many analysts believe he is considering a run for president in 2017.