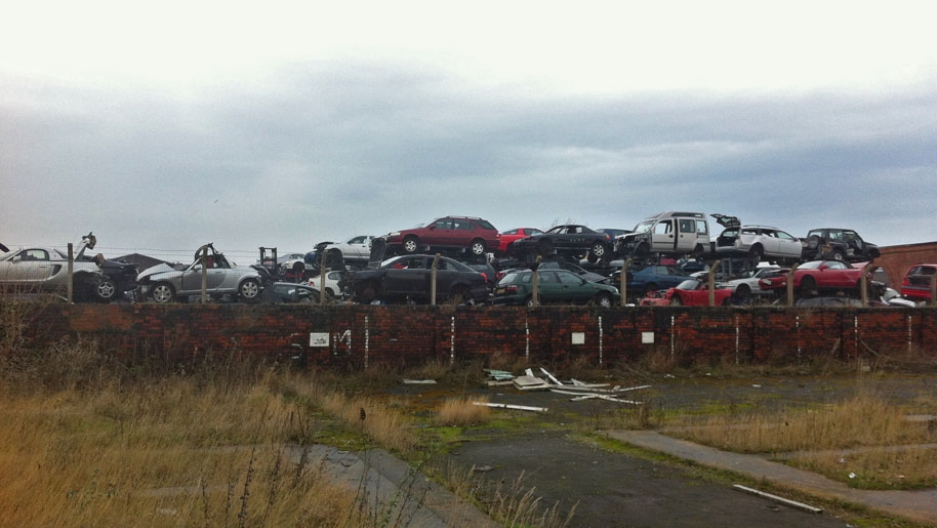 Crashed and abandoned cars at the riverside in Middlesbrough.
Credit: Seamus Murphy/VII
Share

LONDON — Call it the anxious class.

They are the ones who find themselves hanging by a thread in cities and towns where the industrial center has collapsed.

They are struggling to hold on to what they have as the rich get richer and the poor get poorer.

We explored the shifting terrain for this anxious class in Middlesbrough, England and Sheboygan, Wisconsin, two cities that share a similar level of income inequality as measured by the Gini Index.

In this part of the GlobalPost Special Report “The Great Divide,” reporting teams journeyed to Middlesbrough and Sheboygan and found that both places represented a shaky middle ground in a global economy that is increasingly divided by vast disparities of wealth, even in the respective heartlands of two great economic powers.

In Middlesbrough, GlobalPost correspondent Michael Goldfarb and VII photographer Seamus Murphy found a faded industrial town that was once famous for its iron works and that now seems to be more reliant on government support, struggling in a time of economic austerity. The opening scene of town residents bitterly protesting these budget cuts set the stage for a story about diminishing hope among those in the lower rungs of society that they can somehow make it to the upper rungs.

In Sheboygan, GlobalPost dispatched reporter Adam Belz and photographer Rick Sennott to explore a city on Lake Michigan which has the most even distribution of wealth of any metropolitan area in the United States. Here they found prominent families who own healthy companies that have managed to keep generation after generation employed making cheese, casting bathtubs and famously, producing sausage.

There are hardworking people there for sure, but also story after story about those who have lost industrial jobs and who are struggling to get by. Belz and Sennott seemed to capture the anxiety well in a sheltered corner of the harbor where they met an unemployed ice fisherman named Kristopher Panick.

“There’s always going to be the people in charge who have the money,” he said.

The Gini coefficient in metropolitan Sheboygan is .386 and that is a few tenths of a point higher than the national Gini coefficient for the United Kingdom, at .340. GlobalPost chose Middlesbrough as reflective of the heartland of the UK and a productive comparison with Sheboygan.

Another thing that Sheboygan and Middlesbrough, America and England seem to have in common is a collective sense of surprise at just how much income inequality is on the rise. That surprise was reflected here in London at a panel discussion on global income inequality at the Frontline Club, where Goldfarb, GlobalPost columnist Mike Moran and I were invited to participate and to share the findings of our reporting in The Great Divide.

Also on the panel was Alex Cobham of Save the Children, who coauthored a report titled “Born Equal” which looked at the devastating impact of income inequality on the growing ranks of the global poor. And Chris Johnes, director of Oxfam’s UK Poverty Program, who highlighted growing levels of inequality and poverty in the UK. Johnes cited Oxfam’s newly published report, “A Perfect Storm,” which documented the impact of government austerity measures on the poor and warned that the UK was returning to levels of inequality not seen since the time of Charles Dickens.

Here’s an excerpt: “The combination in the UK of economic stagnation and public spending cuts is causing substantial hardship to people living in poverty. This amounts to a ‘Perfect Storm’ of falling incomes, rising prices, public service cuts, benefit cuts, a housing crisis, and weak labor rights.”

The forum at Frontline, a club for international journalists that sponsors events on the most challenging issues of the day, was packed and what seemed to animate the audience most was when the discussion turned to what can be done about income inequality.

Was education enough to pull people out of poverty, or are expensive private school further dividing the economy? Should the government be involved in re-engineering tax codes to correct a policy that seems to favor the rich?

Her list of 10 policy recommendations was bold and included some controversial recommendations, such as capping the cost of private education so more people can afford to go to the best schools and establishing more progressive tax structures that will prevent the rich from finding loopholes.

In closing, GlobalPost’s Mike Moran offered valuable historical perspective and his trademark ability to succinctly articulate the economic issues at the heart of our reporting in The Great Divide.

“A very different conversation that needs to be had about income inequality for the developed and the developing world. That’s not because people are different, but because in a country just embracing capitalism, coming out of proto-capitalism, inequality is part of that story,” said Moran, referring to developing countries such as India and China and the rising inequality there that is occurring amid great economic growth for many.

“For the US in the 21st century and Britain to be experiencing inequality levels of 100 years ago at the turn of the 20th century, which is a reversal of the trend, is a disgrace,” Moran said.

“I don’t know why we don’t have leaders who can tell that story," he said. "The Occupy movement and the Tea Party are the same movement by people with different types of reactions to the belief that the elites have stolen their lives. The story hasn’t been told that way, and that is what we are trying to get at with this project.”