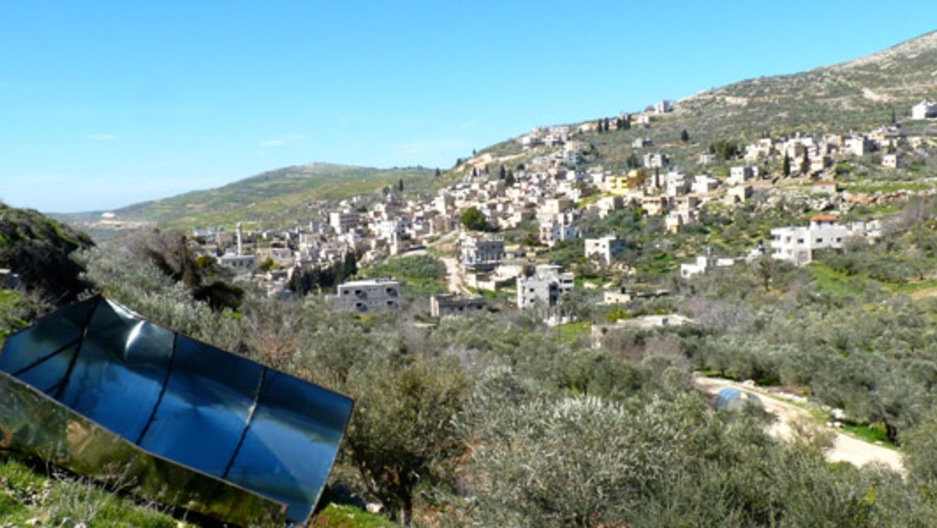 The Palestinian village of Burin is located near Jewish settlements on the outskirts of the city of Nablus. (Photo: Matthew Bell)

Palestinians are hoping to stop the expansion of Jewish settlements in the West Bank with a new tactic. They are putting up hastily-constructed encampments on lands they claim as their own.

The Israeli government has wasted no time in responding by taking the encampments down. But some activists see potential in the new tactic.

On Saturday morning, dozens of Palestinians gathered on a hillside in the West Bank village of Burin, outside the Palestinian city of Nablus. They were there to put up a cluster of tents and metal shacks. They gave the area the name, Al-Manatir. The Arabic word means something like guard post, which is a reference to the Jewish settlements up the hill from here and the frequent clashes between settlers and Palestinians.

The new outpost in Burin didn't last very long though.

Palestinians say Jewish settlers showed up and started throwing rocks. Then, Israeli police and soldiers arrived and they used sound grenades, tear gas and pepper spray to disperse the protesters. The Israeli military says Palestinians threw stones at Israeli soldiers and that several were arrested. The tent camp was also torn down.

"Yes, the Israelis came and demolished the tents," said Walid Eid, a 61-year-old sheep herder from Burin who took part in the tent protest over the weekend. "But at least we had a feeling of success for about two hours."

Another villager, Ghassan Imran described himself as a 40-year-old father and a nurse who works in a hospital in Nablus. "Palestinians need to continue mounting protests like this one," he told me during a visit to Burin.

"This is our land," he said. "We have to stop the settlers from encroaching on our village. This protest was a victory."

The Burin tent protest was the fourth in a recent string of similar demonstrations. Others have taken place outside of Jerusalem, Hebron and Jenin.

During an interview in his Ramallah office, Palestinian politician and activist Mustafa Barghouthi said the protests are aimed at stopping the expansion of West Bank settlements, and rescuing the chance for establishing a Palestinian state.

"We decided that instead of always being reactive to what the army does and what the settlers do, we should be pro-active and build villages on our own land, privately-owned Palestinian land," Barghouthi said.

In a sense, the Palestinians are taking a page out of the playbook of the Jewish settlers themselves. Settlers have built dozens of "unauthorized outposts" across the West Bank that are considered illegal under Israeli law. The government has pledged to dismantle the outposts, but very few have been evacuated.

Barghouthi doesn't like this comparison, however, "because you cannot compare between someone who is stealing the land from somebody else and building on it and a person who is building on his own land. These are two completely different methods."

So, how far will these new protests go? For one thing, none of them has managed to create long-lasting facts on the ground. Though they have generated a lot of media attention.

Nathan Thrall, an analyst of Palestinian politics with the International Crisis Group, said the tactic is a smart public relations move.

"I expect that more of these will pop up across the West Bank. But I also think we should be somewhat cautious about stating that their consequences would be far-reaching," Thrall said.

Thrall added that the demonstrations don't seem to have caught on with the Palestinian public in general, at least not yet. And he said the Palestinian Authority is also ambivalent about supporting any kind of protests that could spark violence.