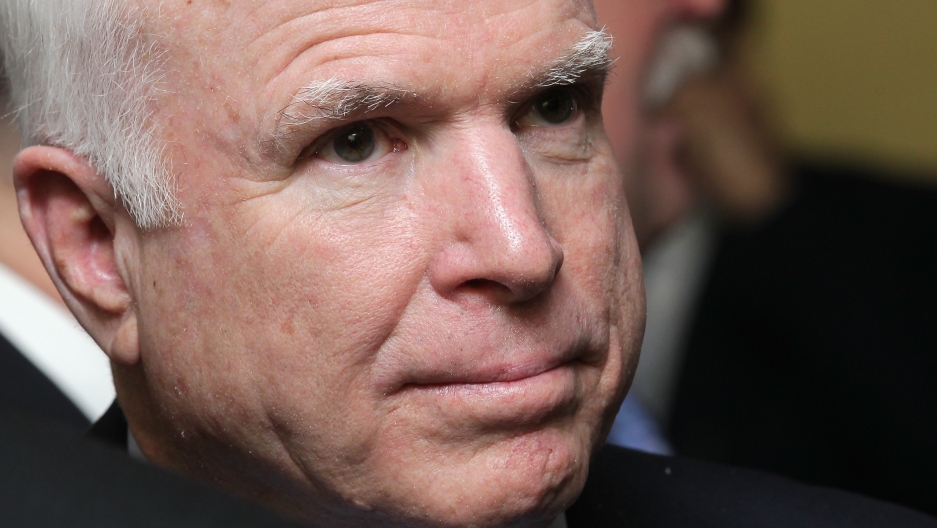 Sen. John McCain is in hot water after comparing Iranian President Mahmoud Ahmadinejad to a monkey in a tweet.

On Monday, the Republican and former-presidential candidate sent out this tweet:

So Ahmadinejad wants to be first Iranian in space - wasn't he just there last week? "Iran launches monkey into space" news.yahoo.com/iran-launches-…

When he got some criticism for what he thought was an innocent joke, he tweeted back to followers:

Re: Iran space tweet - lighten up folks, can't everyone take a joke?

But that response didn't seem to appease fellow Republican Justin Amash of Michigan, who fired back:

Maybe you should wisen up & not make racist jokes. “@senjohnmccain: Re: Iran space tweet - lighten up folks, can't everyone take a joke?”

As the Twitter battle ensued, a third conservative joined the discussion. John Podhoretz tweeted a slew of responses to McCain's initial joke, including these:

How dare John McCain say something demeaning and disparaging about the foremost anti-Semite on the planet.

John McCain misspoke. He should have called Ahmadinejad a pig.

I was insensitive. I apologize to pigs for likening them to Ahmadinejad.

This isn't the first time McCain has put his foot in his mouth when it comes to Iran. According to NBC News, in 2007, the 76-year-old veteran cracked a joke about the country by changing the words to the Beach Boys' song "Barbara Ann" to "Bomb Iran."