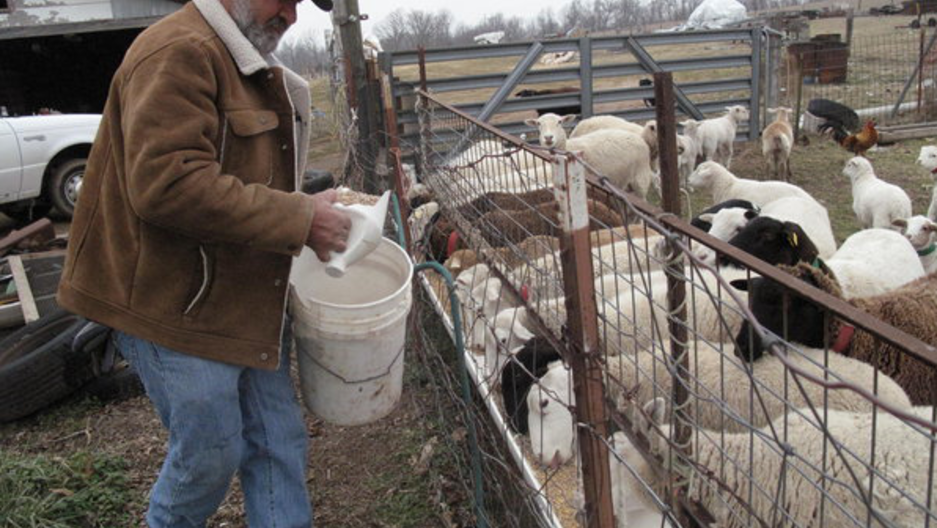 Cirilo Salas, from Mexico, feeds the sheep on his new farm in Missouri. (Photo by Anna Boiko-Weyrauch.)

Every evening after work, Antonio Garrido takes care of the kids. His goats, that is. Two of them just gave birth and Barrido is busy bottle-feeding.

“Animals are beautiful,” he said.

It’s work that represents the start of a new life for Garrido, who is from central Mexico. In the Midwest, where the immigrant population has soared in recent years, Latino farmers are breaking through cultural and language barriers to operate their own farms.

A new U.S. government project is also supporting their efforts.

See more photos from the farm at TheWorld.org.

For years Garrido and his wife lived in California, where he worked at a restaurant. Then, a decade ago, the couple visited Missouri and never turned back. Garrido says his wife embraced life here. It was calm — no traffic, no street gangs. Garrido started a Tex-Mex restaurant, but then sold it to pursue what he did in his youth: farming.

Today, Garrido is a budding cattle and goat farmer with more than 100 acres of land. His story is similar to an increasing number of immigrant farmers who are taking root in the Midwest.

Latino farm owners are not new in places like California and Texas, but they are in Missouri, where immigrant-led farms represent just a tiny slice of farms overall. The operations are mostly small, with many immigrant farmers still working a second job to get by.

But a pilot project launched in January, and funded by the U.S. Department of Agriculture, aims to support aspiring immigrant farmers in Nebraska and Missouri.

“You’re seeing an aging population and a lot of the younger folks in the labor market who are interested in farming tend to be folks from Latin America,” said Stephen Jeanetta, an assistant professor of rural sociology at the University of Missouri Extension and one of the project’s organizers.

The project consists of Saturday workshops at a southern Missouri library, with trainers coaching farmers on making business plans, networking and applying for loans. Organizers hope some farmers will become leaders and pass along what they learn.

Farmer Cirilo Salas is one of the trainees. On a recent morning he delivers breakfast to his flock of sheep. He is a natural at it, having worked farms all his life, starting as a child in Mexico. But keeping livestock in the U.S. does differ from Mexico, he says.

In Mexico, Salas was accustomed to letting animals graze freely. There was more land.

But in the United States, animals are fenced in and Salas must buy feed. It’s pricey.

Two years ago, when a major drought hit the Midwest, Salas lost nearly everything and had to sell most of his flock. To get by, he started working full-time at a feed company. And while Salas is in the U.S. legally, the idea of seeking out government help intimidated him.

Russ Neill hopes to ease those fears. He's a USDA loan agent who helps farmers recover from bad weather and get loans for land and equipment.

He's also part of the immigrant-training project, which points farmers to USDA loan applications and other material available in Spanish. Neill says too often the language barrier creates a distance between himself and Latino farmers.

“It is certainly a little frustrating,” Neill said.

Immigrant farmers can also face discrimination. The USDA is now compensating women and Latino farmers across the country who were unfairly denied loans at some point from the 1980s up until 2000.

For Garrido, operating a farm is more than a business venture, it's a source of pride. He once picked fruit as a teenager in California. Now, middle-aged, he just bought a new tractor. He remembers when the tractor was delivered to his day job, at an autobody shop. When Garrido went out to sign for the vehicle, his boss looked shocked.

“You’re the one who bought the tractor?” he asked.

As for Salas, he soon hopes to become his own boss and farm full-time. When that moment comes, he vows to throw away his watch and work according to the sun.