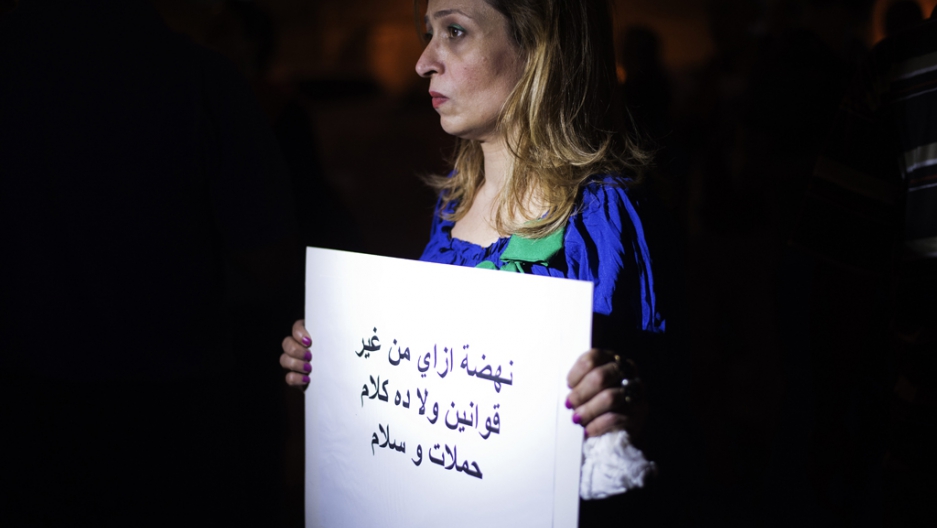 An Egyptian woman holds a slogan which reads in Arabic "What renaissance without laws or is this just words from the electoral campaign" which refers to President Mohamed Morsi's slogan of a renaissance for Egypt, during a demonstration in front of the presidential palace in Cairo on October 4, 2012, to support women rights in the constitution and protest against child marriage.
Credit: GIANLUIGI GUERCIA
Share

The court rejected a lawsuit that challenged a 2007 health ministry decision to criminalize FGM, according to Al Ahram Online.

The suit was first filed in 2008 by Islamist lawyers who claimed the FGM ban violated Article 2 of the 1971 constitution and was inconsistent with the principles of Sharia Law.

FGM, according to the World Health Organization, includes procedures that intentionally alter or cause injury to the female genital organs for non-medical reasons. They can cause severe bleeding, problems urinating, and later lead to cysts, infections, infertility and complications in child birth.

Female genital mutilation is one of Egypt’s most taboo subjects and one of its darkest secrets, says GlobalPost senior correspondent Erin Cunningham.

Unlike the rest of the Arab world, FGM is widespread, particularly in rural areas where a prohibition on the practice is rarely enforced. It was banned in 2008, when the UN says more than 90 percent of Egyptian women were circumcised.

There’s a misconception that Islamic scholars and the Quran endorse FGM as a way to ensure a woman’s purity before marriage, but Cunningham reports that the practice crosses religious lines and is also carried out in Christian communities.

The 2007 decision which the lawsuit challenged lays out punishment for carrying out FGM, including a prison term of three months to two years, or a fine of no less than 5,000 Egyptian pounds ($745), according to the Egypt Independent.

But since the uprising two years ago, police forces have largely withdrawn from the streets, according to Cunningham:

Punishing perpetrators of something like FGM is likely last on the list of law enforcement priorities. Activists are also worried that with an Islamist-dominated government, that tolerance of FGM is likely to increase and roll back decades of work to halt the circumcisions.

Khaled Ali, director of the Egyptian Center for Economic and Social Rights (ECESR), and Hamdy Al-Sayed, Head of the Medical Syndicate, had filed a counter-suit, calling for a dismissal of the lawsuit.

"This is a victory for women's rights, as well as social rights," said Mohamed Adel, media coordinator at the ECESR, according to Daily News Egypt.

The court’s ruling may provide more robust provisions that local governments can call on to enforce the prohibition in some of Egypt’s more remote villages.

Erin Cunningham contributed to this report from Cairo.