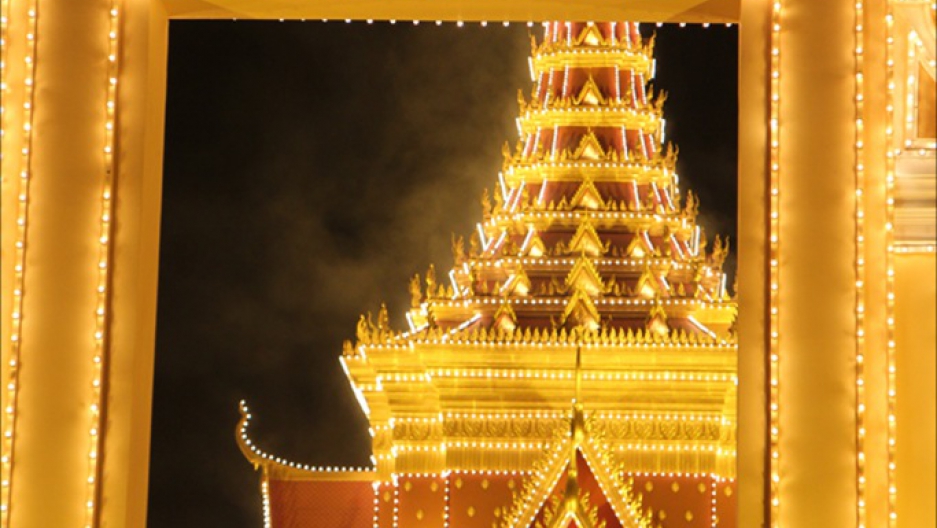 PHNOM PENH, Cambodia — One hundred one guns flashed against a quiet summer sky, then the sound of conch shells pierced the air. Norodom Sihanouk — Cambodia's two-time king and former prime minister — had been placed onto his final funeral pyre.

Sihanouk's son, King Noradom Sihamoni, and his widow, Queen Norodom Monineath, set alight the ornate pyre. The bright display pumped white smoke into the air over the country's capital just after the sun had slipped below an unusually pink February sky.

Cambodians have been mourning their beloved, mercurial King-Father for months now.

The cremation marked the end of a designated seven days of mourning. Last week, Cambodian Prime Minister Hun Sen and the royal family led a massive funeral procession; Cambodians turned out in droves to watch the King Father's body glide through the city streets.

Outside the blocked-off area near Cambodia's royal palace, hundreds of thousands of eager mourners jockeyed for a path inside to pay their final respects. Street toy and snack vendors plied the crowd, and the city's usually-off fountains burst into life for the occasion.

Sihanouk died at 89 on Oct.15, ending a lifetime as a public figure that began when he was first placed on the throne in 1941, a green boy-king.

Sihanouk was a remarkably astute politician, and is widely credited with keeping his small nation out of the Vietnam War that raged nearby for so long.

But even Sihanouk couldn't stave off the Indochinese conflict: he was deposed in a coup in 1970 by General Lon Nol, who would rule the country with American backing until the Khmer Rouge victory of 1975.

Always the political oppurtunist, Sihanouk joined up with the Khemr Rouge — a move that would prove disasterous, as he was immediately locked away in his own royal palace so that he might not provide succor to the peope. While in this prison, he learned of the deaths of five of his children.

But that was not the end game for Sihanouk, who returned to the throne to much rejoicing in 1993, a reinstatement some saw as symbolic of a new life for war-torn Cambodia.

He abdicated in favor of his son, Noradom Sihamoni, in 2004 — but remained the titular head of state, referred to as the "King Father."

The French, who ruled Cambodia at the time of Sihanouk's 1940s ascent to the throne thought that he would prove easy to manipulate. They were wrong.

"They chose me because they thought I was a little lamb," Sihanouk impishly wrote in one of his many books. "Later they were suprised to discover that I was a tiger."