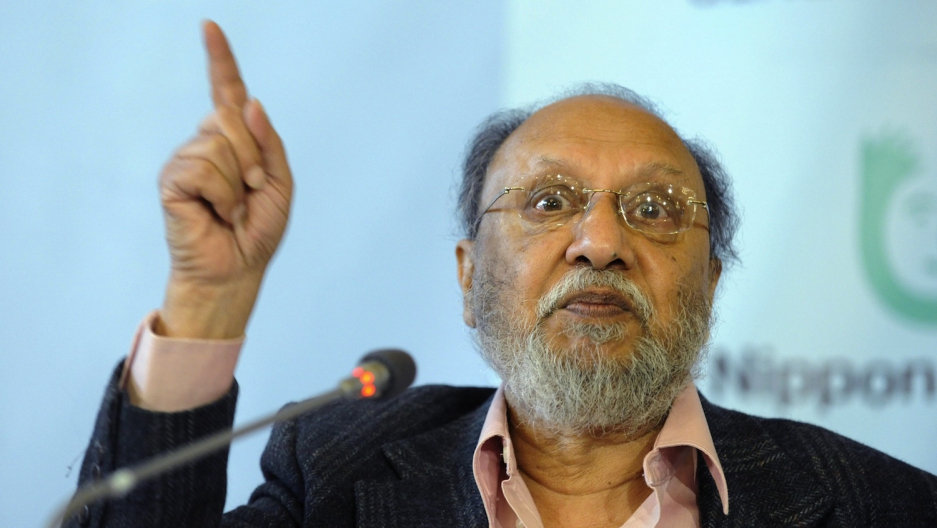 Mad or what? Sociologist ignited a firestorm by suggesting that India's lower castes are responsible for most of the country's corruption.
Share

When the inside baseball of Indian politics makes it to the pages of the New York Times and the website of the New Yorker, it's time to weigh in. Leaving the background to the hyperlinks, here's my take:

Indian sociologist Ashis Nandy's remarks at Jaipur, and his later clarification, are not important simply because the attempt to prosecute him for insulting Indians from lower castes represents yet another attack on freedom of speech in the name of “sensitivity,” as Manu Joseph aptly lampoons in the New York Times and Basharat Peer ably explains for the New Yorker.

The main issue is the content of his statement, which sneakily confirms as “fact” a widely held public perception for which there is no hard evidence, and, in truth, seems patently false based on common sense.

The statement in question?

“It is a fact that most of the corrupt come from the OBCs and the Scheduled Castes and now increasingly Scheduled Tribes and as long as this is the case, Indian republic will survive.”

Much has been made of the context for that statement, which you can read in full here. But in my reading of it nothing undercuts the essential assertion.

Nandy is sincere and sympathetic. He is saying that the corruption of India's lower castes is justified, even desirable. And Nandy admits that corruption of a kind is common among the elites. But it's interesting, to say the least, that he compares the assistance of an old boys' network in getting into Oxford or Harvard to the “millions of rupees” amassed by “the only unrecognized billionaire in India today” Madhu Koda – which were allegedly earned through illegal manipulation of the mining laws and perhaps selling his support, by turns, to the Bharatiya Janata Party and later the Congress. (So much for the context).

Nevertheless, whether Nandy means well or not is immaterial. So is whether or not he suffers from some unwitting prejudices, even as he thinks he is being radical. The most important thing here is that he claims something as “fact” for which he offers no evidence and that he cannot support. Namely, he says that most of the corruption in India can now be attributed to the lower castes, which comprise the mid-level Other Backward Classes (OBCs) and the formerly untouchable Dalits or Scheduled Castes. (Yes, there's also the Scheduled Tribes, but only so much inside baseball for one blog post).

That's called “believing is seeing” – you only process the evidence that suits your preconceptions, if you bother with evidence at all.  Surely there were corruption cases against high-caste Indians as well.  And if they didn't generate as much heat, one might say with equal authority that Mayawati & co were targeted for serious criminal investigations, and the others ignored, precisely because of their respective castes.

As far as I know, there has never been any effort to cross-reference caste and corruption scientifically. Meanwhile, it is also commonly believed that all politicians are corrupt, so the premise that the lower castes are the “most corrupt” seems to based on the perception that they steal in higher amounts, or have fewer concerns about actually doing their jobs – which I suggest would be even more difficult to prove.

Another unproven but widely accepted belief is that India's large industrial houses – Mukesh and Anil Ambani's Reliance Group, ,Shashi and Ravi Ruia's Essar Group, Ratan Tata's Tata Group, and so on and so on – routinely make payoffs to politicians and bureaucrats so that they can skirt environmental laws and the like. I'm not suggesting that's true or false here. But if, as many Indians do, you hold that belief, then what are the castes of the Ambanis, Ruias, Tatas, and so on? And who are they supposedly paying? Only the low-caste leaders and bureaucrats? That would be a mysterious bit of selectivism. And how would the low-caste leaders get away with this corruption if their high-caste counterparts were so scrupulously honest?

Yes, you say (Manu Joseph), but India's lower castes make up 59 percent of the population, so it is imminently logical that they account for 59 percent of its corruption. Professor Nandy was simply delivering a lesson in demographics. Really?

They say power corrupts, and that may be true. But what is definitely a fact is that you have to have power to indulge in corruption. Nobody will pay you a bribe if you can't do him any favors. And you can't extort money to do your duty as a government representative if those duties are confined to fetching tea and coffee. So how corrupt are the Dalits and OBCs? I suggest that they can only be corrupt in proportion to their representation in positions of power.

It's notable that it isn't easy to find a breakdown of the Indian parliament by caste, even though caste-and-creed mathematics is the key to winning elections here. But accounting for some margin of error, there's likely 300+ upper caste Hindus, 200- lower caste Hindus, 20-odd Muslims and a dozen or so Christians and Sikhs. So, if every member has equal power and is equally dishonest, the lower castes don't account for 59 percent of India's parliamentary corruption, they account for 37 percent, compared with the upper castes' 59 percent. And I'd wager if we look at the real power of the members, in terms of the committees they chair, ministries they control, and so on, then that percentage would have to be tweaked even further.

Yes, but most of the corruption happens at the bureaucratic level....?

Okay: What's the power breakdown in the bureaucracy? I invite you to help me update these figures, but the only numbers that I was able to turn up in a rather painstaking search are from 1995, and limited to the Scheduled Castes (Dalits) and not the Other Backward Classes. Here goes:

In Class I positions – in other words top decision makers – the percentage of Dalits holding the seats has increased from less than 1 percent in 1953 to a little more than 10 percent in 1995. Let's say OBCs have down three times as well – for 30 percent of the positions. That still means two-thirds of the positions of real power, where you can really line pockets, are held by the upper castes.

In Class II positions, the percentage of Dalits has increased from 1.3 percent to 13 percent. So by my liberal guess, OBCs might account for 39 percent, leaving half of the wealth-generating posts to the upper castes.

In Class III positions, where you might turn up a few earning opportunities, Dalits have gone from 4.5 percent to 15.5 percent. So here Dalits and OBCs might account for a two-thirds majority.

And in the lowly Class IV positions, where the only corruption you can indulge in is deciding who gets tea first, or how clean the toilets might be? Dalits' share of the posts remained static at about 21 percent. So maybe 80 percent of the posts can be attributed to Dalits and OBCs.

What other numbers can we tap?

The only real information we have about corruption is the voluntary declarations of financial assets that India's politicians must make before contesting elections. They don't necessarily provide a smoking gun: A politician is allowed to get rich through legal means, as well as corrupt ones. But for the sake of argument, let's accept the commonly held perception that all Indian politicians are dirty, and look at some of the only numbers we have at our disposal. Unfortunately, we're also constrained because the candidates don't declare their castes when they file their affidavits, so we'll make some assumptions based on party affiliation: For the sake of argument, we'll assume all Bahujan Samaj Party (BSP) candidates to be Dalits, all Samajwadi Party (SP) candidates to be OBC, and all BJP and Congress candidates to be upper caste Hindus – though in fact only the majority of the candidates fielded by those parties would fit the bill.

Upper caste:
Among the BJP candidates who contested for Lok Sabha seats in both 2004 and 2009, the listed increases in assets include one MP with a whopping 6000% increase in his net worth, another with a 2000% increase, and a third with a 1500% increase – among a lot where a brief scan suggests the average increase in assets is in the realm of 300-400%. (I wasn't able to convert the file to the right format to do the math).

Lower caste:
Among the SP candidates there are MPs whose assets increased 1500% and 1000%, but the average increase looks to be substantially lower – perhaps only 100-150%.

Among the BSP candidates there are MPs whose assets increased 9000%, 1000% and 800%, but again the average appears to be lower (especially if you throw out the guy who boosted his wealth 90 times over).

So is it a “fact” that the lower castes are the most corrupt? The truth of the matter is that nobody knows. But it's irresponsible to make such claims based on prejudices and assumptions.