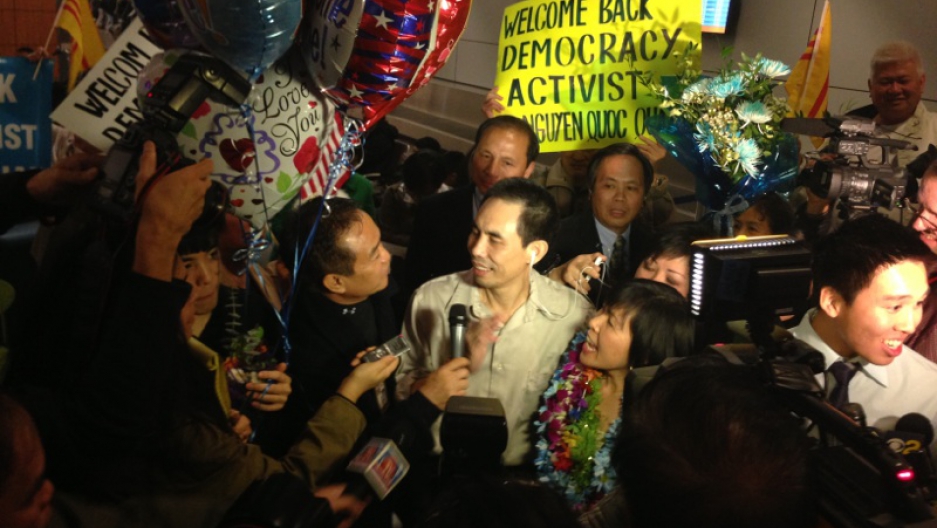 SACRAMENTO – American activist Dr. Nguyen Quoc Quan has been released after 9 months of detention in Ho Chi Minh City by the Vietnamese government.

Vietnamese authorities claimed the California software engineer and former teacher was engaged in terrorist activities due to his association with Viet Tan, a pro-democracy group that works "inside Vietnam and among the diaspora ... to mobilize the power of the people."

The Vietnamese government has for years had a contentious relationship with Viet Tan, of which Quan is a long-standing member.

The 58-year-old activist arrived in his home state of California on Wednesday evening to an exuberant crowd of family and friends, soon after his wife received the surprising news that the Vietnamese government would allow him to walk free.

"I received a phone call from the consulate, and [the staffer] told me 'You better sit down,''' Quan's wife, Mai Huong Ngo, told GlobalPost.

Ngo dutifully sat down, but became worried: Was her husband sick, she wondered?

He wasn't. Instead, the consular staffer told Ngo that her husband was returning to the home they shared in the Northern California city of Elk Grove.

Quan's ordeal first began on April 17, when he was taken into custody by authorities as soon as he landed at the Ho Chi Minh City airport. He was charged with "subversion of the administration" under Article 79 of the Vietnamese criminal code.

The former high school teacher was then held for nine months without trial in Ho Chi Minh City — and US diplomatic authorities, members of Congress, and pro-democracy groups swiftly began to apply serious pressure on the Hanoi government to secure his release.

Quan's release comes only weeks after 14 Vietnamese nationals were convicted of  "anti-state" crimes under the exact same precepts used to detain Quan in April.

Thirteen of the activists were sentenced to prison terms ranging from three to 13 years, provoking international outcry from human rights organizations and even the United Nations.

Read more from GlobalPost: Vietnam under pressure to change

Diem suspects that the outcry over the conviction of the 14 played a major role in Quan's unexpected release.

"I really think that because of that, they [the Vietnamese government] realized it was in their best interest to release him," said Diem. "Pressure from the US government specifically, and from the international community in general."

US Representative Dan Lungren (R-Gold River) had also taken up Quan's cause, advocating to US Ambassador to Vietnam David Sheare and to Secretary of State Hillary Clinton for his release.

"Whenever anything like that happens a lot of US lawmakers do not take that very lightly, and they spoke out very strongly," Viet Tan Chairman Do Hoang Diem told GlobalPost. Diem credited Congress members Zoe Lofgren, Loretta Sanchez, Ed Royce, and Frank Wolf especially for their efforts on Quan's behalf.

The activist's detention featured large in a May 2012 Congressional hearing on human rights in Vietnam, in which US State Department human rights chief Michael Posner called the Hanoi administration's rights record "discouraging and unacceptable."

In their statement about Quan's release, Vietnamese authorities called Viet Tan a "reactionary organization." State media often refers to the group as a terrorist organization.

Do Hoang Diem, the chairman of the the 30-year-old rights group, denied the claims.

Vietnam's Foreign Ministry stated that Quan was allowed to return home because he had "confessed his offense" against the law — an assertion that both Ngo and Quan's wife, Diem, denounced as entirely untrue.

"If he had asked for that, he would have been home nine months ago!" said Diem, who noted her husband had "begun laughing" when she related the claim to him.

This latest stint wasn't the first time Quan had been detained in Vietnam.

In 2007, he spent six months behind bars after he was accused of planning pro-democracy seminars in Ho Chi Minh City, an act that's considered tantamount to terrorism by the Hanoi administration.

Ngo said her husband is understandably happy to secure his freedom again, but he's deeply concerned about the fate of the 13 young activists that are currently serving jail sentences under Article 79 charges.

"In 2007, he was in jail in Vietnam, and one of the 21-year-old boys couldn't read or write," she said. Quan seized the opportunity to teach: He patiently wrote out letters on the prison floor, eventually teaching the young man how to read.

"If something happens to the young people, he feels very bad," said Ngo. "Because my husband is a teacher, he's always thinking of other students."

Will Quan continue his pro-democracy work in Vietnam, even after his extended detention?

"I know my husband is very committed to what he does," said Ngo.

"I think he will continue to fight for the freedom of Vietnam, for non-violence and democracy in Vietnam.... But I don't want him to get arrested again!"