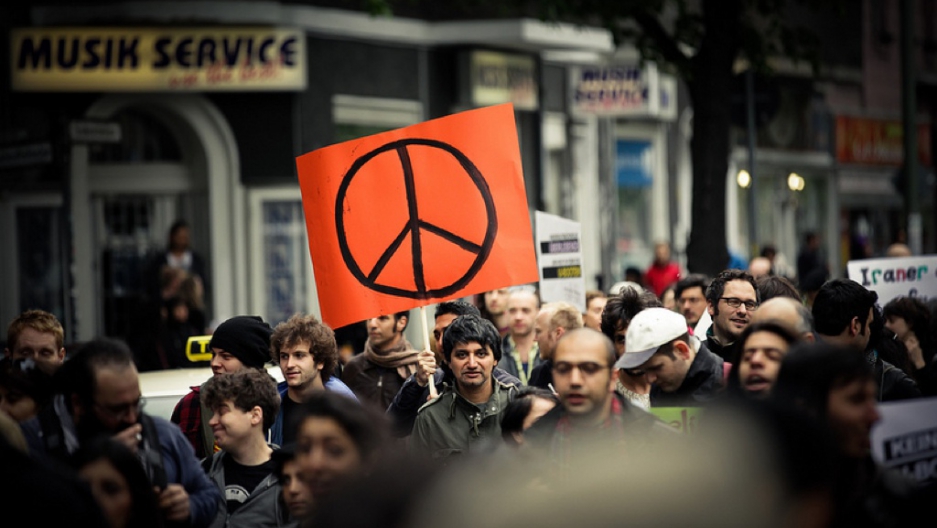 Members of the Iranian Israeli Circle in Berlin, Germany on May 5, 2012.
Credit: Jakob Huber
Share

BERLIN, Germany — Avner Ofrath, a 26-year-old Israeli living in Berlin, speaks with a quiet confidence about what he would like the German government to do differently.

“Our first demand from the German government is to stop sending any weapons to Israel, or to any other country in the region or in the world,” he says, leaning over the coffee table in the corner of a leftist gathering place, Café Commune. “That is the most important thing, because we really see how Germany contributes to Israeli aggression, and that is unacceptable.”

Sitting to his left is Pazhareh Heidari, 29, a political refugee from Iran. The mechanical engineering student has lived in Germany since 2000.

“The other very important issue is the sanctions against Iran,” she says, brushing her black bangs from her eyes. “That’s also a reason why we had to protest against the US government. The sanctions are really horrible for the people of Iran. They are suffering.”

Ofrath nods, as do the half a dozen others sitting around the low-slung table, all of them members of a unique political entity called the Iranian-Israeli Circle. They are students and scientists, men and women in their 20’s and 30’s, Iranians and Israelis, some of them new arrivals to Germany, others who have lived here most of their lives.

They are united in their opposition to the foreign policies of Israel, Iran, Germany and the United States.

“We have a common cause,” Ofrath said. He came to Germany, the country his grandparents fled in the 1930s, in 2008 to study modern history at the Free University.

The group was formed last March in response to news that the German government was supplying Israel’s Navy with an additional submarine. A group of Israelis protested the move in front of the Israeli embassy in Berlin during the visit of the country’s defense minister, Ehud Barak. Some of the Israelis thought they should include Iranians in the protest, because the context included the heated discussion over how to respond to a nuclear Iran.

What followed was a small meeting between a few Israelis and Iranians who broached the subject of working together. “We are all very critical against our governments, both the Iranians and the Israelis,” says Mitra, a 37-year-old Iranian researcher who came to Berlin in 2011, and who asked not to be identified by her real name.

“We said: ‘This is a fight between our governments, the people are not involved in it, so let’s do something to stop it.’”

Making that initial leap of faith took effort, Mitra says. “It wasn’t easy for me, you can imagine, being raised in an environment where every week there are gatherings with people saying ‘Down with Israel’ — even if I am a very open-minded person, it’s not easy for me to say, okay, let’s work together.”

But they did choose to work together, and the next meeting grew in size. News spread through Facebook and word-of-mouth, and soon the group was planning its largest demonstration, “Iranians and Israelis Against War,” which was held on May 5, 2012 in Berlin’s Kreuzberg district. About 1,000 people attended that protest, members said.

Organizers called on participants not to carry flags or national symbols, and declared that, “nationalism, racism and anti-Semitism would not be tolerated.” Demonstrators carried signs in English and German, and the group printed their materials in both languages, plus Hebrew and Farsi.

In the months that followed, members organized public information sessions on issues such as the sanctions against Iran and German involvement in the Middle East. There were smaller protests during Israeli Prime Minister Benjamin Netanyahu’s visit to Berlin in December, and in front of the US Embassy before the presidential election last fall.

Now, the group meets regularly at the café in Kreuzberg, where smoke hangs in the air, the coffee machine grinds regularly, and a Turkish tea costs one euro. The members are planning their next move — an information campaign about the sanctions.

When asked if there are some issues on which they disagree, the group laughs almost simultaneously and lets out a long, “No!” Yael, a 36-year-old Israeli chemist, said if there is any disagreement, it’s usually the Israelis who are disagreeing amongst themselves, and the Iranians amongst themselves.

Some members credit the city of Berlin with providing them the opportunity to find each other. “In general, there are not a lot of places where Iranians and Israelis can actually gather together,” says Schaghajegh Kord, a 28-year-old chemist who was born in Iran. “In Berlin there is this very wide spectrum of different kinds of left activists who can come here together and work.”

There have been online efforts to bring Iranians and Israelis together, such as the Facebook page “Israel-loves-Iran,” but members of Berlin’s Iranian-Israeli Circle see themselves as a unique organization, acting to promote political change.

There is the chance of Israelis and Iranians in other cities following the group’s lead. Members have been contacted by people in Austria and Canada, and hope to generate interest among contacts in New York.

Members of the group are pessimistic that the reelection of US President Barack Obama would lead to a change in American policy toward Iran and Israel. Their message to the US president: Stop the sanctions against Iran and military and economic aid to Israel.

“Start there,” Heidari says, laughing. Ofrath smiles, and says: “Yeah, do that and come back and we’ll tell you what is next.”