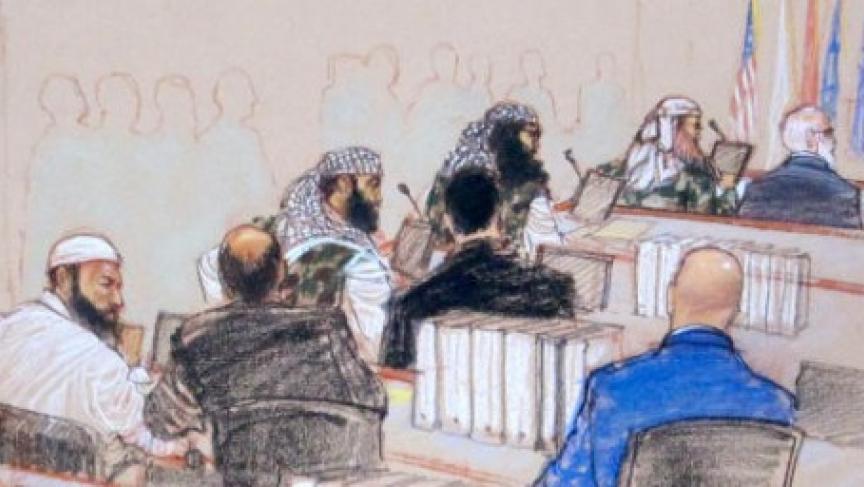 In this pool photo of a sketch by courtroom artist Janet Hamlin and reviewed by the U.S. Department of Defense, the five Sept. 11 defendants, back row from left, Mustafa Ahmad al-Hawsawi, Ammar al Baluchi, Ramzi Binalshibh, Walid bin Attash and the self-proclaimed terrorist mastermind Khalid Sheikh Mohammed, attend a hearing on pretrial motions in their death penalty case at the Guantanamo Bay U.S. Naval Base in Cuba, Monday, Jan. 28, 2013. Two of the defendants delayed the start of the hearing Monday when they refused to respond to questions from military judge U.S. Army Col. James Pohl, top right. (AP Photo/Janet Hamlin, Pool)

Share
This report was cross-posted with our partner program Frontline. The pre-trial hearings in the military commission of 9/11 mastermind Khalid Sheikh Mohammed and four co-defendants stalled midway through the week here at "Camp Justice," in the naval base in Guantanamo Bay, Cuba. The hearings this week were to address a number of defense motions before the court, including seeking to end government monitoring and censorship of attorney-client communications, the compelling of witnesses to testify for the defense, and requests for information about the treatment of the men while in CIA custody and in the Guantanamo prisons. Confusion ensued on Monday, the first day of the hearings, when a mechanism to prevent classified information was triggered, leading to the courtroom feed being cut off. It's a standard procedure, but no one knew who had hit the censor button, a question that has still not been publicly answered. On Tuesday, Commission Judge James Pohl, an Army colonel, announced that the more controversial motions on the court docket for the week – arguments from the defense to make available information about the CIA's rendition, detention, and interrogation program, and evidence from the "black sites" where Mohammed was held – were to be pushed back to later hearings scheduled for February and April. The defense is trying to get details of the all five defendants' treatment – such as Mohammed's infamous waterboarding 183 times while in CIA custody – on the record in an effort to undermine the case against them. The defense is arguing that the treatment amounted to illegal pre-trial punishment – a concept derived from military law, and the same claim made unsuccesfully by Bradley Manning's defense last December. The defense also asserts that the treatment amounted to "outrageous governmental conduct" – a legal concept that essentially holds that the government's behavior was so beyond the pale that they no longer hold the legal authority to convict. The prospect of the government dismissing charges for a crime on the scale of 9/11 seems unlikely; however, the same arguments could be advanced to make the case for mitigating the sentencing of the men, should the court get to that stage. Right now, it looks as though that stage would be a very long way away. The court was to take the remainder of this week to resolve a number of defense motions that seek to compel the production of certain witnesses. On Tuesday, Judge Pohl issued an oral ruling rejecting a defense motion to find rule 703 (pdf) of the military commissions unconstitutional. Among other things, the rule gives the prosecution the right to approve and reject defense witness requests. Navy CDR Walter Ruiz, the lawyer for co-defendant Mustafa al-Hawsawi, responded that the defense would need time to look over and adjust their witness request arguments based on the new ruling, noting that he would prefer to do that with the benefit of a written version rather than the oral description – a "Reader's Digest" version, as the judge himself described it. The judge asked if the defense had any witness motions they were willing to go forward with. But after getting through one motion, the judge cancelled Wednesday's session, replacing it with a private meeting in which he and counsel for both sides would "see if we can make useful time of Thursday when everybody's going to be here anyway." Late Wednesday evening, word came from the court that enough resolution had been reached to hold one more session, beginning Thursday at 9 am.