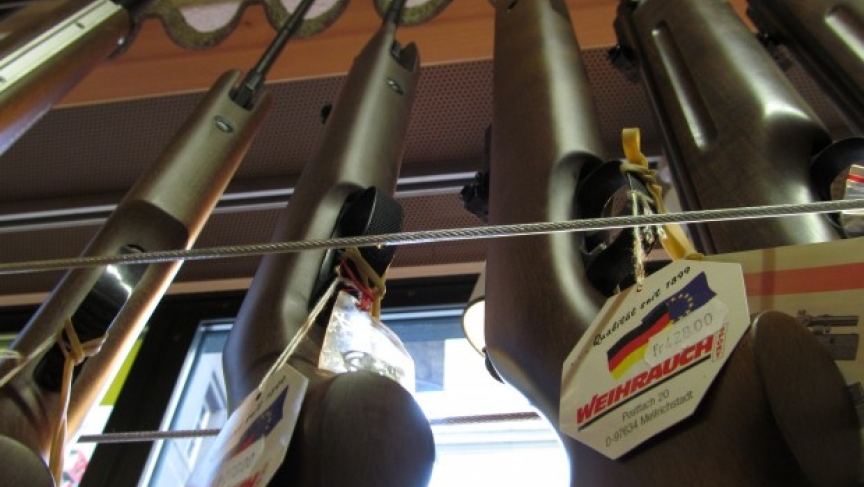 While Washington debates what to do about guns, some gun advocates are looking abroad for inspiration, to Switzerland. They say the Swiss have high gun ownership rates, low crime, and lots of freedom.

But some Swiss reject the comparison. After a long-weekend, Daniel Wyss' gun shop in a village near the Swiss capital Bern, is buzzing with sportsmen and gun enthusiasts eager to re-arm.

Wyss said his customers are hunters, sportsmen, collectors, and folks who want to protect themselves. In that respect Swiss gun enthusiasts wouldn't seem so different from those in the US.

But Jo Lang, vice president of the Swiss Green Party, said there is one big difference. Lang is a survivor of Switzerland's worst shooting tragedy in 2001, when a gunman shot 14 people in a state legislature. And he'd like to see the difference remain.

"In the United States you have a weapon to defend yourself, your home, your garden, your wife, your children; even the dog and the cats. This tradition doesn't exist in Switzerland," he said.

Swiss law requires men to enlist in the military or do national service by age 25. Women can choose to enlist. This compulsory military service generally means much of the population knows how to handle guns.

"In Switzerland to be a citizen and to have a weapon were very, very linked with community, or with the nation," Lang said. "It was not linked with your garden or your family."

But, gun control has steadily tightened in Switzerland; moving from little to no restrictions, to a permitting system and gun owner registries.

The debate over tighter rules was renewed this month, when a gunman with a history of psychiatric treatment killed three people.

"If you have an incident as Newtown, or Winnenden, or Dunblane, then the politicians come and they cry as crazy, and they make a policy to prove to people, 'We are here, and we understand you, and we will enforce the law,'" said Hermann Suter, vice president of proTell. "But in fact, you never will be able to avoid such tragedies."

Though Suter calls proTell a sister organization to the NRA, there are major differences between the organizations in terms of finding consensus. He said the Swiss have been compromising on more stringent gun rules for more than 10 years, including limiting access to ammunition.

"In a reasonable way you have to do both. You have to have normal gun control, and you have to have reasonable ammunition control. I think with the actual law we have in Switzerland we fulfill these two points. The most important point is the point of the society," Suter said.

Suter thinks the Swiss military tradition, and sport shooting activities foster gun education from a young age, are important in a country with a strong gun culture.

Estimates put the number of guns in Swiss homes between 2.3 and 4.5 million out of a population of 8 million. The vast majority are military-issue rifles, bought by soldiers after their service.

Gun advocates in the US have argued that crime is low in Switzerland because there are more guns. And it's true there are few shooting deaths.

But Roger Schneeberger, secretary general of the State Police and Justice Directors Conference, said it doesn't seem that guns are a deterrent to crime, as US advocated claim.

"If you see the development of the number of burglaries in Switzerland this is a very negative trend–we have more and more every year. And if burglars would think 'there is a weapon in every house, I shouldn't go to a Swiss house for a burglary,' these wouldn't be the figures we have recently," he said.

Schneeberger said from a police perspective fewer guns equal less risk. He said one of the biggest assets for Switzerland in preventing shootings, despite a gun tradition, is a well-integrated healthcare system.

Gunsmith Daniel Wyss agreed that fewer people fall through the cracks in Swiss society compared to a place like the United States, and maybe that is why gun crime is still rare.

And despite some in the US praising Swiss gun culture, Wyss, and many in Switzerland, think the trend will clearly lead to more gun and ammo controls, not fewer. And he accepts that as the current reality.