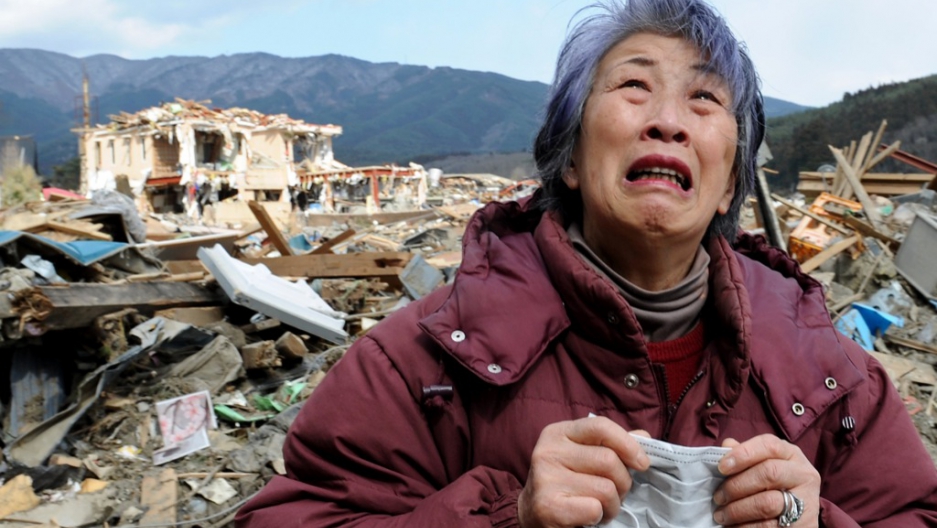 An elderly woman cries in front of a destroyed building in the devastated town of Rikuzentakata in Iwate prefecture on March 19, 2011, eight days after a massive 9.0 magnitude earthquake and tsunami hit the northeastern coast of Japan's main island of Honshu.
Credit: NICHOLAS KAMM
Share

TOKYO, Japan — Futoshi Toba felt exactly the same sense of desperation as the other 25,000 residents of his town when it was struck by a devastating tsunami on March 11, 2011.

The 48-year-old had been elected mayor of Rikuzentakata, a town on the northeast coast, less than a month before the Tohoku region was struck by a 9.0-magnitude earthquake, and then engulfed by a wave that killed almost 20,000 people and destroyed tens of thousands of buildings.

But even his darkest moments Toba, whose wife, Kumi, died in the disaster, was never in doubt that his town would recover.

"I thought that time would alleviate the huge difficulties we were facing and that things would be better in one, maybe two, years," he said on a recent visit to Tokyo.

But as the region prepares to mark the second anniversary of the tsunami and the triple meltdown at Fukushima Daiichi nuclear power plant, Toba fears the plight of thousands of survivors has been forgotten amid bureaucratic dawdling and indifference among Tokyo politicians.

Toba, one of several local leaders to have criticized the government in recent months, said there was little evidence of a recovery in Rikuzentakata, where 1,800 people died and thousands of homes and businesses were swept away. Thirty of the town's children aged under 16 were orphaned, while 150 lost one parent.

Today, about 5,000 of the survivors live in temporary housing units built on higher land, while others have moved to other towns and cities inland.

"Reconstruction isn't going well at all," Toba said. "We are still surrounded by mountains of rubble, and the few buildings that survived the tsunami have been left standing. The survivors share my view that there is no hope for the future."

He made no attempt to hide his frustration with the inability — or unwillingness — of politicians and ministries in Tokyo to bend the rules to speed up the recovery effort.

That problem dates back to the disaster's immediate aftermath, when Rikuzentakata officials were told they could not build a supermarket on agricultural land, even though all of the town's existing stores had been destroyed.

"I have come up against that vertical thinking time and again over the past two years," Toba said. "Politicians here say they stand with us, but their words are not being matched by actions."

The most pressing problem in Rikuzentakata and dozens of other affected communities is getting people into permanent housing. The deaths of so many landowners have created a legal minefield for construction projects, but even projects that have been approved are taking far too long to come to fruition.

In one case, Rikuzentakata submitted a plan to build new homes on higher land in August 2011, but construction did not begin until more than a year later.

"Twenty-four hours mean nothing to politicians here, but for a tsunami survivor, it feels like an age," Toba said. "It fills us with sadness and anger, and I can't help feeling that if the disaster had struck Tokyo or Osaka, reconstruction would have been much faster.

"Representatives of the government came to talk to us, but they were not able to change the situation and take the hard decisions that were needed. They left us with nothing but a tremendous sense of disappointment."

The cost of rebuilding towns such as Rikuzentakata is putting extra strain on Japan's already delicate finances. Before the disaster, the town's annual budget was around 11 billion yen ($120 million); next year it will soar to around 110 billion yen ($1.2 billion).

Even with extra investment, the exodus of residents has created a labor shortage, with 40 percent more jobs reportedly available in Rikuzentakata than the number of people seeking work.

The central government launched a reconstruction agency last year in the hope of cutting out red tape and speeding up reconstruction.

"The agency has done nothing to improve our lives," Toba said, adding that requests still have to go through the relevant ministries before being reported to the agency. "In fact, our workload has increased."

He is hopeful, however, that his town's fortunes will improve under the new prime minister, Shinzo Abe, who has made the swift reconstruction of the Tohoku region a priority.

"Tohoku winters are very long, and to be honest, the people there are feeling very low at the moment," Toba said. "But I believe this year will be better ... that people will see new buildings going up in front of their eyes."

His criticism of the authorities has earned him a reputation as a troublemaker. He doesn't reject the description, but prefers to see himself as a local leader and father with responsibilities to the people closest to him.

"When I saw the devastation it was the first time in my life that I'd felt truly hopeless," he said, recalling the 24 hours he spent trapped in the town hall, unaware that his wife was among the victims.

"I couldn't search for her because I had responsibilities to the town as its mayor. As a husband, even today I feel tremendous guilt and remorse that I couldn't go and look for her."

Almost two years on, Toba says he has two missions in life. "The first is to rebuild Rikuzentakata as a prosperous, beautiful town. The second is to make sure that I bring up my two sons properly."