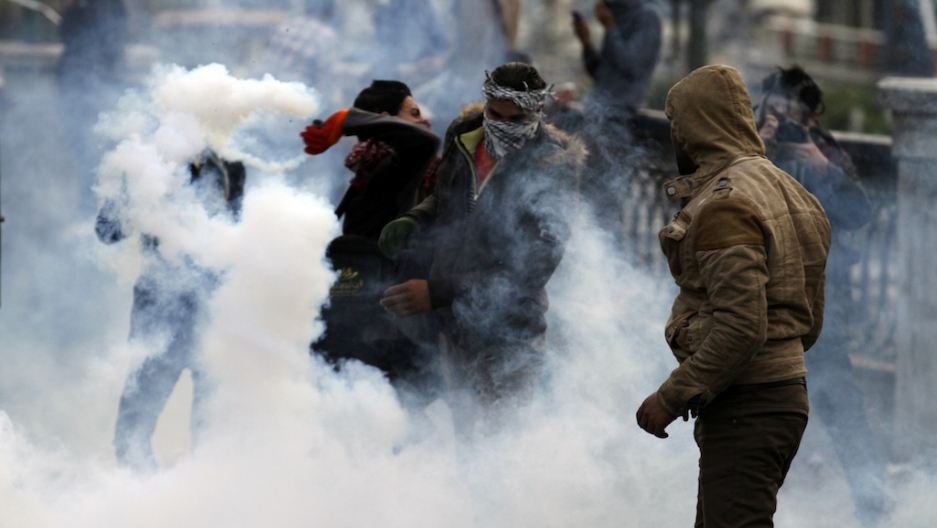 That raises the death toll to 54 in nearly a week of violence and political upheaval that kicked off with the second anniversary Friday of Egypt's uprising.

While many of the larger protests have subsided, sporadic clashes with security forces continue across the country. That includes central Cairo, where the areas around Tahrir Square have descended into a de-facto state of lawlessness, GlobalPost's Senior Correspondent in Egypt Erin Cunningham says.

Protesters continue to battle police with rocks and homemade firebombs while officers fire back with pellet guns and tear gas. An armed gang launched several attacks on the InterContinental Hotel on Tahrir Square, looting the lobby, terrifying guests and prompting the international hotel chain to temporarily close the establishment.

According to one account given to Reuters, a van of 50-some armed men descended on Tahrir before dawn, opening fire and killing one of Wednesday’s victims. Another report, by Agence France-Presse, said the two protesters were killed by buckshot.

The Health Ministry did not confirm the reports.

In the Suez Canal cities, the center of some of the fiercest clashes, Morsi announced late Tuesday that he would delegate the decision to either soften or lift a 9 p.m. curfew to the three provinces' governors.

Few, if any, residents respected the curfew, and locals took to the streets to protest, socialize, and even play soccer in defiance of the president’s order.

Morsi, however, did not indicate he is ready to lift the state of emergency he declared earlier this week in those provinces. The emergency law allows police to arrest and detain protesters for 30 days without charge, and to try detainees in secretive security courts.

Human Rights Watch today condemned the use of the emergency law, which, before the ouster of the former regime last year, was in place for 30 years and sowed deep resentment against police and other security forces.

The move adds to an increasing perception among ordinary Egyptians that Morsi is adopting the repressive tactics of his authoritarian predecessor, Hosni Mubarak.

The crisis deepened while Morsi visited Europe in a bid to promote his democratic credentials, but he canceled the Paris leg to cut the trip short as tensions back home came to a boil, according to Reuters.

During his visit Wednesday to Berlin, German Chancellor Angela Merkel urged the Egyptian president to open a dialogue with all political forces.

But Morsi rejected calls to form a unity government with the opposition.

“In Egypt there is a stable government working day and night in the interest of all Egyptians,” Morsi said, according to The New York Times.

Mohamed ElBaradei, a former UN diplomat and current leader of Egypt's secular Constitution Party, said on Twitter that "stopping the violence is a priority." He added, "a serious dialogue" is needed, and called for constitutional reforms.