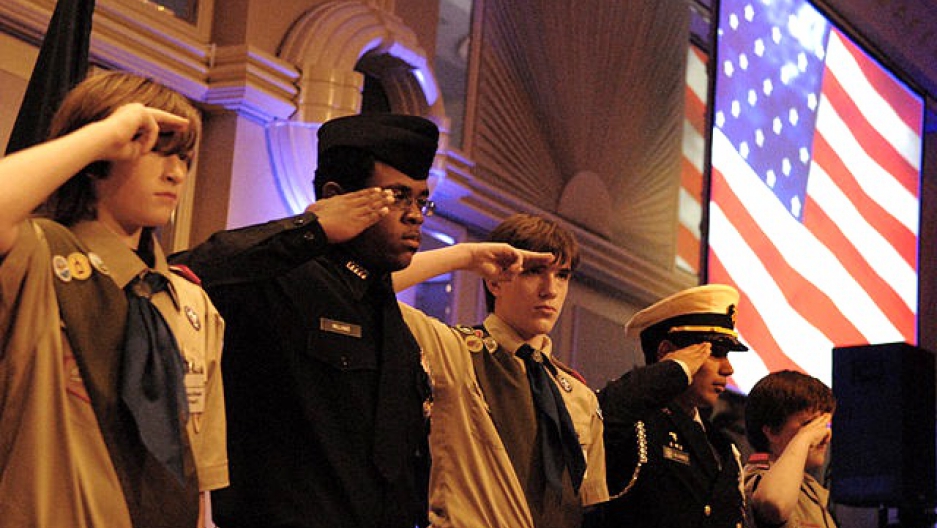 Members of the Boy Scout of America salute during the national anthem. (Photo by Cherie A. Thurlby via Wikimedia Commons.)

Boy Scouts of America leaders this week said they're reconsidering the group's ban of gay members and leaders.

Last year when the organization reaffirmed their ban, hundreds of scouts left the organizations and numerous companies withdrew their funding. In 2000, the Boy Scouts won a U.S. Supreme Court case affirming the group's right to ban gay members.

Scott Leadingham, a journalist and longtime Eagle Scout, says he's surprised by the organization's reversal, because they reaffirmed their ban only months ago.

"It seems that the pressures on them to change the policy have just become too large to ignore and I can't imagine that they'd want to go forward being on the wrong side of history," he said.

Eric Jones, a former Eagle Scout, says after he came out to his boss at the Boy Scout camp he'd been working at for years, he was asked to leave.

"It wasn't that I was doing a bad job or that I was in trouble for lying or anything like that, it was just my boss was tied up," he said. "He had to let me go because he has to follow the policy."

After he left the camp, Jones says his boss received a letter from the Boy Scouts asking that he be removed.

The ban on gay members and scout leaders has hit the organization hard.

The organization lost a lot of funding over the last decade, typically from large sponsors of local troops, Leadingham said. Modernizing the organization, he added, could help them with funding.

"When (the United Way) pulled back, those local councils of the boy scouts were faced with a large deficit in fundraising," he said.

Now, there's pressure for the Boy Scouts to reconsider their current policy because local councils are losing their ability to fundraise. But religious organizations — specifically the Mormon church — make up a majority of Boy Scout sponsors. And they're not eager to see the policy changed.

"In 2000, the case that was being reaffirmed at the Supreme Court, the Mormon church was advocating that it be left in place or they could pull out their support for the boy scouts," he said.

If the organization does remove their ban on gay members and scout leaders, Leadingham says, the proposed policy will most likely be left up to the discretion of local organizations.