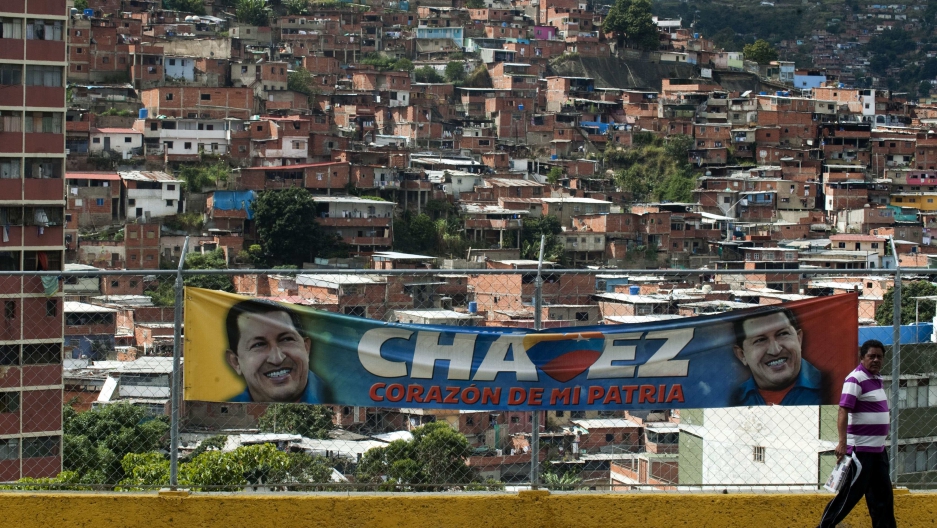 CARACAS, Venezuela — Jose Vicente Aponte is clad in full military fatigues, ironed with creases to the standards of a US soldier, though he wears the red beret of socialism.

Thousands of supporters of the ailing president walk alongside Vicente, marching toward the Caracas slum of 23 de Enero — named for the day, Jan. 23, 55 years ago, when a military coup toppled Venezuela’s last dictator, Marcos Perez Jimenez. After Perez’s fall, the South American country’s governance was swapped between two parties whose increasing corruption bred popular discontent — and the rise of new self-proclaimed revolutionaries like Hugo Chavez.

“Bolivar had a philosophy of revolution that Chavez has implemented here,” said Vicente, with the same self-assuredness of a soldier. “Chavez is on his way back.”

Walking through 23 de Enero is like a stroll through a leftist hall of fame: murals of Chavez, Ernesto “Che” Guevara, Fidel Castro and Karl Marx cover the walls. The barrio is a bastion of support for Chavez, though it still faces poverty that has endured through the socialist leader’s nearly 14-year presidency.

Vicente’s confidence in “El Comandante,” as Venezuela’s firebrand president is affectionately called, echoed throughout the march that day. Chavez would soon be back from cancer treatment in Havana to continue his Bolivarian revolution, they believed.

“We’re not even thinking about him not returning,” adds Maria Goreti Calderon, her face covered in the bright yellow, blue and red of the Venezuelan flag. “We have faith that he will be okay.”

The public has not seen or heard from their 58-year-old president for more than six weeks. On Dec. 11, he went through a six-hour cancer operation that led to pulmonary complications and unexpected bleeding.

His loyal government officials have remained unspecific about the cancer Chavez suffers from, and have offered mixed messages about his condition. They say Chavez is reaching the hardest battle of his illness one minute, and then showing great signs of improvement the next. Over the weekend, Venezuelan authorities said Chavez overcame the lung infection and that he even sent a letter to a summit of Latin American and European leaders in Chile.

But, in Venezuela, he’s missed regional elections, his State of the Union address and even his own inauguration to a third six-year term in office.

Some, particularly those on the extremes of Venezuela’s opposition, do not share the confidence of those marching on Jan. 23.

Wearing a sign over her mouth that read “Venezuela is a dictatorship,” as well as chains colored with the Venezuelan flag padlocked to her arms, Mary Para, a 56-year-old teacher, took part in a protest earlier in the week against what she viewed as the unconstitutionality of Chavez’s inauguration no-show.

“There’s a man governing this country who was chosen by no one,” she said, referring to Vice President Nicolas Maduro, who has taken the reins in Chavez’s absence. “We don’t know if Chavez is alive or dead. We have no president right now.”

Slightly less dressed for the occasion, Rafael Araujo sat on the steps outside a McDonald’s just off the small plaza where the opposition protesters congregated.

“I have no idea who the president is right now,” he said, “because the constitution says one thing and they impose another. I’m not even sure we have a president.”

Opposition politicians, meanwhile, have been quiet on the matter. On Jan. 23 they met at a plaza in Chacaito, a slightly upscale shopping area of Caracas. The running joke was that the site was chosen so they could go shopping after the Saturday morning protest.

Henrique Capriles Radonski, the opposition leader who lost by 11 percentage points against Chavez in October’s presidential election, is expected to play the situation diplomatically in an effort not to alienate Chavez supporters who could turn to him should another election be called.

“I think Capriles is doing the right thing,” said Carlos Rivero, a Caracas-based civil engineer, “avoiding saying too much or something that could come back to haunt him should Chavez return. Just imagine the triumphant return on Feb. 4 — total euphoria.”

Feb. 4 will mark the 21st anniversary of Chavez’s failed coup attempt, which launched him into Venezuela’s national psyche and led to his victory in 1998’s presidential elections. A glorious, risen-from-the-ashes return would fit Chavez’s histrionic style.

“I am starting to think he’s going to show up, laughing his head off, saying, ‘You idiots were ready to bury me and here I am, completely healed,’” Rivero said. “The egg on the opposition’s face could take decades to wipe off.”

While many expect Venezuelans to eventually accept that Chavez is not coming back, at least as president, anything is possible. Chavez’s cultish following is often unquestioning. Asked how long Venezuela can continue in presidential limbo, Gloria Torres, a supporter living in another Caracas slum, said simply, “As long as Chavez needs.”

No matter what side of the political divide Venezuelans sit, Rivero summed up the general feeling in Caracas.

“Who the hell knows,” he said.