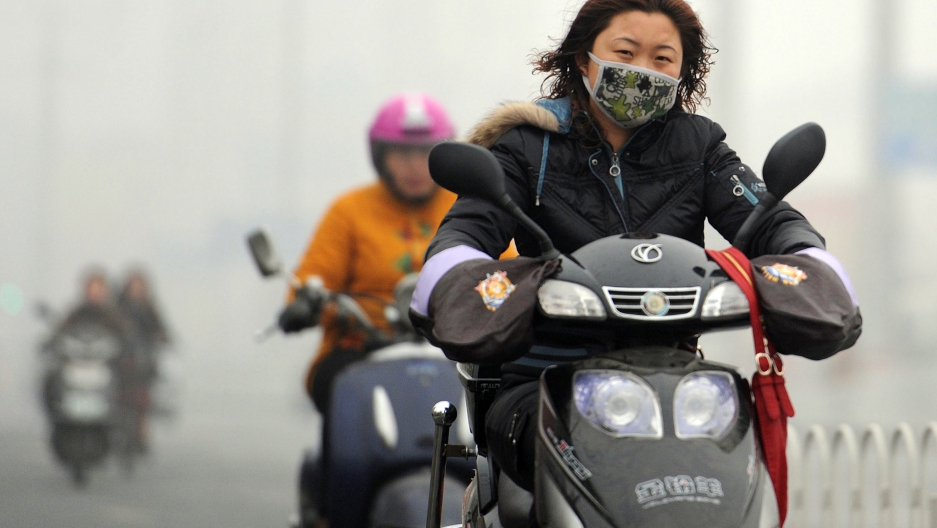 Smog has engulfed China's capital, causing hundreds of flights to be canceled and sales of face masks to surge.
Credit: STR
Share

HONG KONG — As toxic smog returned to Beijing this week, a celebrity real estate developer who’s a deputy to the Beijing Municipal People's Congress said he would introduce a Clean Air Act to the local government, China Daily reported.

The developer, Pan Shiyi, posted an online poll on Sina Weibo, China's Twitter, to gauge support for his idea. Within three hours, 25,000 people, or 99 percent of respondents, had said they supported a Clean Air Act.

On Tuesday, Premier Wen Jiabao also called for action to tackle the pollution problem affecting much of China. According to the Wall Street Journal, Wen is the highest level official so far  to publicly acknowledge the poor air quality affecting hundreds of millions of people in recent weeks.

GlobalPost Senior Correspondent in Hong Kong Benjamin Carlson said pollution in China has taken off as a social issue.

"What's remarkable so far is the extent to which Chinese media have openly and critically covered the smog in Beijing, which up until recently was still euphemistically called 'smog,'" Carlson said. "The US Embassy's decision to publish pollution readings on its Twitter feed may deserve some of the credit for pressuring the Chinese government to give the public more information."

Carlson said experts have long believed that the environment could be one of the most dangerous issues for the Communist Party, as it's gotten so bad that it could galvanize popular unrest.

"That's what happened in the USSR, after all," Carlson said. "The CCP knows this is a risk, so I wouldn't be surprised if we see some kind of high-profile environmental measure rolled out in the next couple weeks.

"Recent smoggy weather is affecting people's production and their health," Wen was quoted as saying in a statement posted on a government website.

"We should take certain and effective measures to accelerate industrial restructuring, and push forward energy conservation and emissions reduction."

Online, citizens discussed measures a new law should include, such as car-free days and closing schools in smoggy weather, stricter curbs on industrial gas emissions and better protection for the public and those who work outdoors, China Daily reported.

Today, smog reduced visibility in Beijing to less than 200 yards and caused airlines to cancel flights and officials to close highways, CNN reported.

A Beijing pediatric hospital said it has treated a record 9,000 children this month for respiratory illnesses due to inhaling smog, according to CNN.