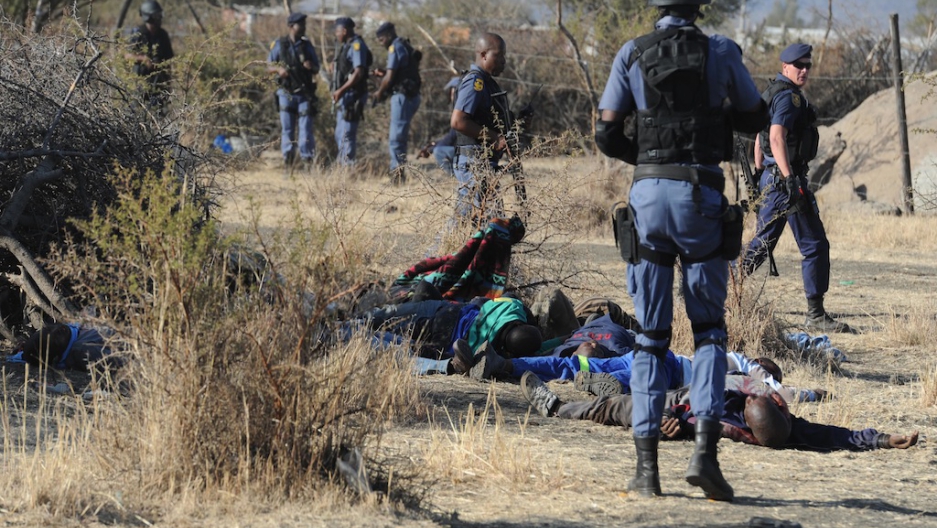 Police surround miners killed during clashes between protesting miners and police near a platinum mine in Marikana on August 16, 2012. A new video shows that police did not act in self-defense, as they claimed, and in fact murdered striking miners.
Credit: -
Share

Cell phone footage obtained by a news station in South Africa appears to show police gunning down protesters at the Marikana mine, a crucial piece of the investigation into the deaths of 43 people who died in August amid a tense strike for workers' rights.

The video shows one officer, on the ground, watching a miner crawl through the brush on his stomach. The first officer calls for another officer nearby not to shoot, but shots are audible.

Then, the two go to investigate the body, and the second officer brags, "That motherf*cker, I shot him at least ten times."

The victim was later identified as a 26-year-old who was shot 12 times, according to the news report.

Thirty-four miners were shot and killed by police during a violent standoff between miners and police at the Lonmin-owned mine in Marikana in August, sparking a push for serious reforms to labor rights and union organizing in South Africa.

Since then, a government-led investigation into what happened hasn't yielded significant findings, but the anger over the situation is still palpable across the country.

This video proves what the RIGHTS blog reported in August, that protesters were indeed murdered by police at the scene. Until now, police had insisted they were acting in self-defense.

For more of GlobalPost's coverage of worker's rights around the world, check out our Special Report "Worked Over: The Global Decline in Labor Rights."