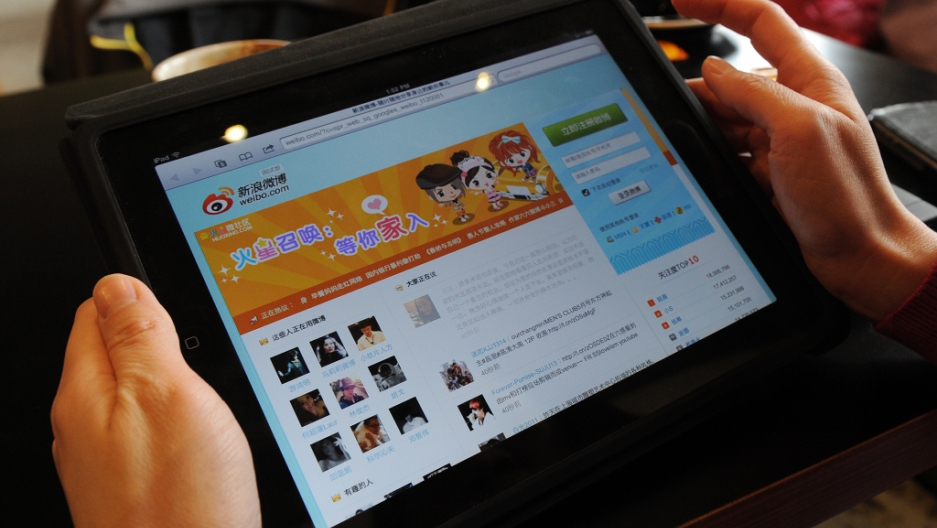 A woman views the Chinese social media website Weibo at a cafe in Beijing on Apr. 2, 2012. In an effort to minimize the influence of dissenting voices on the microblogging site, the Chinese government will employ millions of workers to post pro-party messages.
Credit: Mark Ralston
Share

HONG KONG — China’s censors have a favorite new tactic: If you don’t like what people are saying online, shout louder.

Faced with the unprecedented explosion of information available to citizens over social media — some of it exposing corruption — officials have realized that simply deleting posts is not enough. They need to push positive propaganda as well.

At a closed-door meeting this week, Beijing’s propaganda chiefs rolled out a new plan to have 2 million propaganda workers spread the Party line on microblogs, according to the Beijing News.

The instructions issue orders for all workers to “read Weibo, open a Weibo account, write Weibo posts, and study Weibo.” (Weibo is the Chinese term for Twitter-like social media.)

Beijing propaganda boss Lu Wei told attendees that all government offices should open an account, with the goal of inundating the Chinese internet with positive tweets about anything the Communist Party deems sensitive: inequality, food prices, economic hardship, unemployment, the runaway real-estate market.

“The strategy has always been to make sure that the voices that are approved by the government are the loudest and clearest and easiest to hear — on all platforms,” says Jeremy Goldkorn, a Chinese media expert in Beijing. “That’s Leninist media strategy adapted to the modern age.”

In its ceaseless campaign to control dissent in China, officials have made clear they are no longer content with simply trying to censor and police online writings; they want to guide the debate as well.

In 2008, Party secretary Hu Jintao laid the groundwork for this policy, stressing the importance of “building new media, creating a new pattern of public opinion guidance” and telling cadres, “We must conscientiously take hold of the building of [propaganda/editorial] teams, enhancing our cohesiveness and fighting strength.”

But the true wake-up moment for Chinese officials came in 2011, when a newly built high-speed train crashed in Wenzhou, killing 40 and injuring 191. Within minutes, survivors were on Weibo sharing photos of the disaster. The government tried to enforce a media blackout, but was overwhelmed by the public backlash online.

Since then, Beijing has introduced more measures trying to counter the power of Weibo.

One of their most powerful tools is a mostly invisible, widely reviled group of online vigilantes called the “50 Cent Party.” Paid by the government to masquerade as ordinary internet users, this mass of private citizens writes posts on internet forums to subtly — or not so subtly — manipulate the conversation toward the Party line. (Their name refers to their rumored pay per post: 50 mao, or 8 US cents.)

Estimated to number from 280,000 to perhaps double that, the 50 Centers play an increasingly important role in the media strategies of local officials. Videos and training documents leaked online reveal some of their priorities. In 2011, a group of 50 Centers received this list of instructions on how to steer conversation:

(1) To the extent possible make America the target of criticism. Play down the existence of Taiwan.

(2) Do not directly confront [the idea of] democracy; rather, frame the argument in terms of “what kind of system can truly implement democracy.”

(3) To the extent possible, choose various examples in Western countries of violence and unreasonable circumstances to explain how democracy is not well-suited to capitalism.

(4) Use America’s and other countries’ interference in international affairs to explain how Western democracy is actually an invasion of other countries and [how the West] is forcibly pushing [on other countries] Western values.

(5) Use the bloody and tear-stained history of a [once] weak people [i.e., China] to stir up pro-Party and patriotic emotions.

But how does it work? Practically speaking, 50 Centers do what Americans think of as “astroturfing”: they write hundreds of posts — often working together — designed to persuade people toward the government’s perspective.

Often the 50 Centers are hit-you-over-the-head obvious; but the most successful ones can be exceptionally crafty. One such commenter explained his skills in a fascinating interview with dissident artist Ai Weiwei last October.

A 26-year-old university graduate, the 50 Center explained that for some assignments — such as softening the blow of news about rising food prices — he plays the troll, distracting people’s anger onto himself. In other situations, he assumes multiple personas, debating himself with two usernames to attract attention, then letting the “correct” view win. For his part-time labor, he makes $8 per 100 posts, he said, for a total of $100 a month.

Asked whether 50 Centers play a big role in shaping public opinion in China, he said yes.

“Truthfully speaking, I think the role is quite big,” he told Ai Weiwei. “The majority of netizens in China are actually very stupid. Sometimes, if you don’t guide them, they really will believe in rumors.”

He estimated that 10 to 20 percent of postings on the Chinese web are from the 50 Cent Party.

And that’s not counting the people working on behalf of private clients. Called the Internet Water Army — because they “flood” target websites — these companies post fake comments, phony news or damaging rumors on a client’s behalf.

Thanks to its online propaganda strategy, some experts say the government is already succeeding to some extent in drowning out dissent. While exposés of corrupt officials continue to leak every day, the debates around them are now carefully monitored and manipulated.

“I think the government has now completely caught up with the Weibo age,” says Goldkorn. “They’ve succeeded in dominating Weibo just like they do every other type of media, or at least having enough control so that it doesn’t get out of hand.”