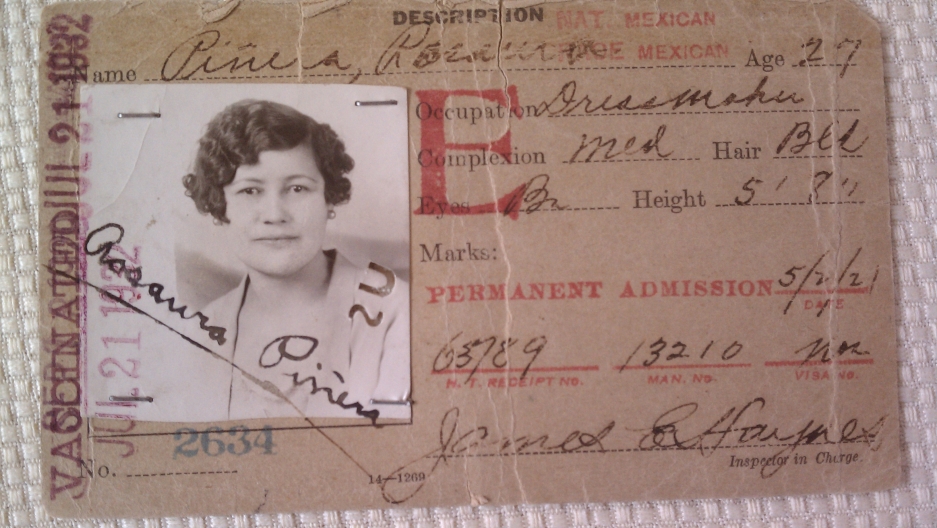 An immigrant ID card from the 1920s and 30s for Rosaura Piñera, who later became a US citizen at age 100.

My great-grandmother became an American citizen at the age of 100.

Before she was here illegally just as an estimated 11 million others live today. Her chance to legalize her status came in 1986 when President Ronald Reagan signed the Immigration Reform and Control Act, or as Spanish speakers know it, "la amnistía."

I got to thinking of my great-grandmother recently when I wrote a news spot about a public opinion poll on immigration reform. I also thought about her last week when I attended a swearing-in ceremony for 452 new US citizens in El Paso, Texas. Two fellow journalist friends became Americans that day. The only other swearing-in ceremony I'd ever been to was for my great-grandmother.

Rosaura Piñera was born in Guadalupe, Chihuahua in 1898. It's likely she and her family moved to El Paso 12 years later during the outbreak of the Mexican Revolution. In the United States she worked at a clothing factory. We think she was able to obtain her US residency while living in El Paso. By the time she reached 30 she'd lost her parents and siblings to sickness or accidents. Not long after, she married my great-grandfather, who was a few years younger. In their wedding pictures she stands at least a head taller than him in heels.

My great-grandfather took his new bride back to Mexico where they stayed and raised a family. It wasn't until he died that she even considered returning to the United States. By then she'd lost her US residency. Her two children had already immigrated legally to the United States where they had raised their own children, including my mother. My great-grandmother was now alone in Mexico and everyone agreed it was best that she come live with us in El Paso.

She came over with today's equivalent of a border crossing card. The document was only meant for temporary travel to the United States, but my great-grandmother used it to stay. We'd cross back to Mexico with her frequently to visit her old adobe house. I spent many happy holidays in Mexico as a child.

That's how it went till 1986, when my mother heard about "the amnesty." My great-grandmother was 88. Some three million illegal immigrants came out of the shadows that year. My mother said the lines to apply for residency stretched for hours. She remembers it cost $185 to submit my great-grandmother's application.

Before she became a resident, getting healthcare for my great-grandmother wasn't easy. My grandfather would do free plumbing jobs for their family doctor. In exchange the doctor would see my great-grandmother. When she fell and broke her hip the whole family pooled money to pay for her operation. My mother remembers one sunny morning when my great-grandmother asked if it was overcast outside. "I see clouds," she had said. That signaled to my mom that my great-grandmother had cataracts. The discovery was all the more painful because my mom knew they couldn't afford to seek treatment.

Years later, toward the end of her life, my mom helped my great-grandmother apply for citizenship. At first she was denied because she couldn't answer two questions in English. My mother was furious. The city newspaper did a story and the director of El Paso's Immigration and Naturalization Service called to apologize. He allowed her to reapply and made a language exemption because of her age.

Less than a month later El Paso INS organized a special swearing-in ceremony especially for my great-grandmother. They called in a few other citizen applicants who were ready for naturalization to also participate. Multiple news teams from El Paso and neighboring Ciudad Juárez came to cover to the ceremony. It's not every day someone becomes a US citizen at age 100.

As a citizen my great-grandmother got to vote in the 2000 presidential election. She was very ill then, but that didn't stop her. The firefighters at our local polling station brought the ballot to our car so she wouldn't have to go out in the cold. She was thrilled.