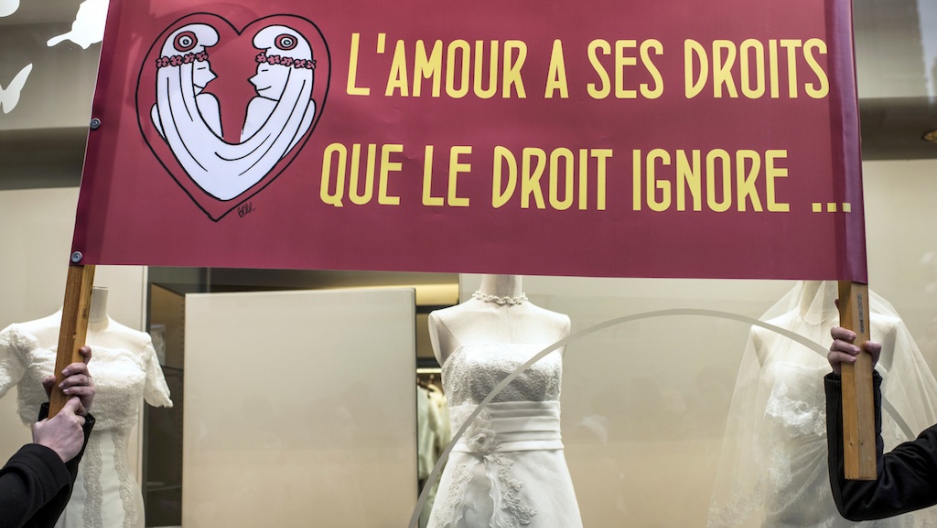 People hold a banner which reads 'Love has its rights that law ignores' in front of a wedding shop during a demonstration to support gay marriage and adoption on January 26, 2013 in Lyon, central France.
Credit: Jeff Pachoud
Share

Paris is bracing for a massive pro-gay marriage march Sunday, as thousands of activists converged on France's capital to show their support for President Francois Hollande's controversial marriage equality bill.

The rally comes two days before a parliamentary debate on the legislation, which would legalize gay marriage and give same-sex couples adoption rights, and just weeks after a January 13 protest against the reforms — thought to be France's largest social issue protest in decades, France24 reported.

Organizers stressed that the protest was not conceived to compete with the anti-gay-rights rally.

“We’re not demonstrating in response to our opposition," Nicolas Gougain of the Inter-LGBT association told FRANCE 24. "We’ve been demonstrating for 10 years already."

Among those in attendance will be Paris's Mayor Bertrand Delanoe, who is gay, and Hollande's wife Valerie Trierweiler, Buzzfeed reported.

A brunch event was held Sunday morning; the rally will take place this evening, according to Buzzfeed.

Thousands of gay rights supporters also marched in the French city of Lyon Saturday ahead of Paris' evening demonstration, according to Reuters.

"When marriage passes in France it will have a significant impact across Europe," said Brian Ellner, the co-ordinator of the Human Rights' Campaign New York efforts in 2011, Buzzfeed reported. "Just as our New York win unleashed momentum across the United States, France is a cultural capital of Europe and historically has led on issues important to civil society."