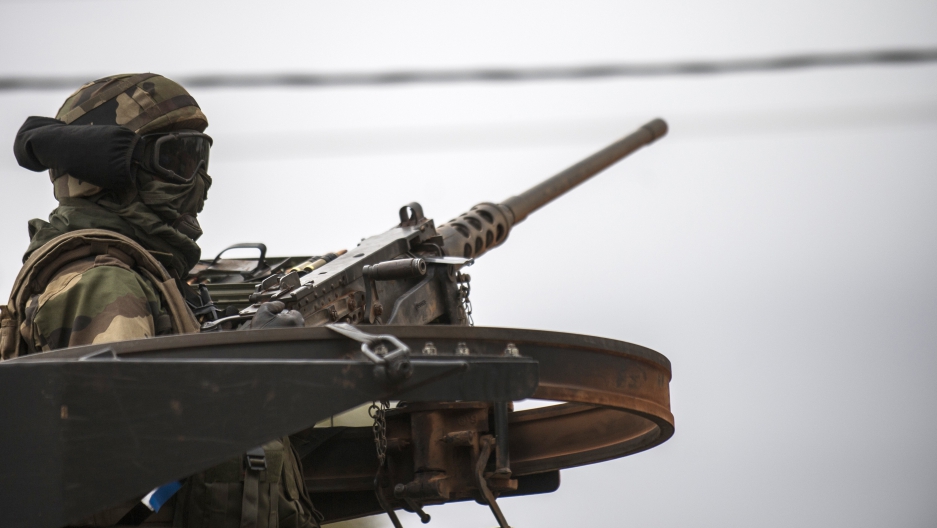 French troops in Mali: They may be among the world's best, but can they make up for the rest of the continent?
Credit: FRED DUFOUR
Share

But there are few troops anywhere in the world better prepared for their task than the marines, foreign legionaries, and other elite French units rolling north to confront the Jihadist militants controlling much of Mali.

"The French special forces are tip top, they’re up there with the best of them," says Brooks Tigner, chief policy analyst at Security Europe, a specialist newsletter.

"They also have vast experience in expeditionary forces in West Africa," he adds. "They really know the territory, the boundaries, the topography and the ethnic problems. They are very well placed."

Among America's European allies, only the British can match France's ability to project significant military force overseas. However, not even they have much experience operating in the string of former French colonies across North and West Africa — where the recent rise of Islamist groups is posing the international community’s latest security threat.

French troops have deployed in more than a dozen African missions during the past two decades. French and British planes took the lead in NATO's air campaign over Libya in 2011, when French forces also successfully intervened to halt a civil war in Ivory Coast. Three years earlier, they spearheaded a European operation to prevent Sudan's conflict from spilling over into Chad.

Despite talk of quagmires at the start of both those operations, the French troops achieved their objectives with minimal trouble.

Although French newspapers have raised concerns that the current operation to retake an area twice the size of France risks degenerating into an Afghan-style mess, French leaders are confident the 2,500 troops in Mali can get the job done, then hand over to a regional force of African troops.

"Our objective is the total reconquest of Mali,” Defense Minister Jean-Yves Le Drian told a recent TV interview. “We are not going to leave any pockets of resistance."

Despite their confidence, however, the French are aware that a prolonged conflict against well-armed and well-motivated Islamic opponents could stretch their forces and their finances. Like other European countries, France has been cutting defense budgets as it grapples with staving off economic crisis.

Military spending in 2011 fell below NATO's target level of 2 percent of economic output for the first time.

According to the latest NATO figures from 2011, the only allies apart from the United States with defense spending above the threshold were Britain and crisis-wracked Greece. By contrast, US defense spending stood at 4.8 percent of GDP.

Downsizing has been a longer-term trend, however. The French armed forces have fallen in number to 227,000 from 548,000 since 1990. Military planners currently operate on the premise that France can sustain the deployment of 30,000 troops overseas, compared to up to 50,000 barely a decade ago. Some senior officers have cast doubt even on the 30,000 figure.

Although the numbers rushed to Mali are relatively small, French troops still had to hitch rides on British and US heavy transport planes to get to West Africa.

Strategic airlift has been a long-term problem that should be solved with the delivery of new A400M transport planes being built by Airbus. France has ordered 50 of the new heavy lifters, with the first three due to arrive in the second half of this year.

Another shortfall are drones and surveillance satellites that could prove crucial if French troops have to pursue small groups of Islamists through northern Mali’s scrub and desert terrain.

"They need eyes in the sky that can track in real time moving targets," Tigner says. Once again, they may have to rely on British or American help.

Although the French government has been quick to thank allies for such support, there’s resentment that other European countries haven’t been more forthcoming with help.

"Europe cannot always give responsibility to one member state," Arnaud Danjean, a French politician who chairs the European Parliament's subcommittee on security and defense, said Wednesday.

Even though European countries agree the threat from Islamists in Africa’s Sahal region concerns them all, he complained, none have offered combat troops, leaving France to singlehandedly serve as Europe's army.

French officials have long complained that efforts to give the European Union a defense role have floundered because members have lacked either the resources or the political will to send troops into the world's hotspots.

Military spending has been shrinking across Europe for years: the United States, which provided half of NATO’s defense budget during the Cold War, now pays 75 percent.

Even countries with large armies are unable or unwilling to deploy them. Although Germany maintains almost 200,000 troops, fewer than 9,000 are estimated to be available for overseas deployment — even in the unlikely event the government would be willing to send them.

"Many Europeans send soldiers on peacekeeping missions, but as we saw in Libya, as we see in Mali, not so many countries are willing to do real shooting, or fighting, or bombing," says Daniel Keohane, head of strategic affairs at the think tank FRIDE. "There’s clearly a deep division among European member states over how to use forces."

In 2007, European Union members signed up to a system that rotates responsibility for maintaining two highly mobile "battlegroups," 1,500-strong units on standby for emergency deployments. However, there’s never been agreement to use them.

The most the EU could consent to do in Mali was to send a 450-strong training mission for the country's enfeebled army.

"France has intervened because the problem in the Sahel threatens to blow up into a serious threat to Europe. It has gone in alone because the other Europeans have shirked their responsibility," the Germany daily Suddeutsche Zeitung wrote last week. "That says a lot about the state of the common European security and defense policy. And none of it is good.”