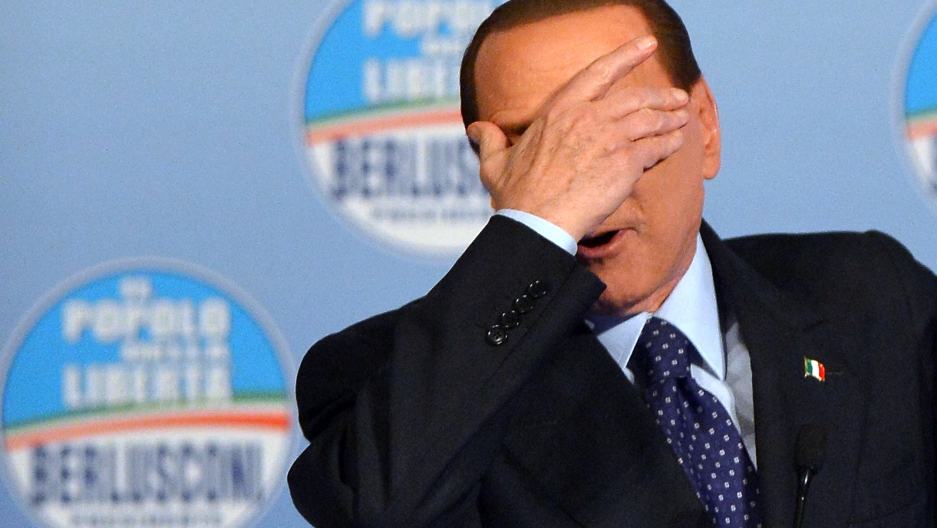 Former Italian Prime Minister Silvio Berlusconi was condemned Sunday for remarks he made at a Holocaust commemoration in which he defended the record of Benito Mussolini.
Credit: Vincenzo Pinto
Share

Berlusconi is at it again.

In a speech in Milan on Sunday commemorating victims, Berlusconi said that despite Mussolini's anti-Jewish laws, he was all-in-all a good leader and a decent guy.

"It's difficult now to put yourself in the shoes of people who were making decisions at that time," Berlusconi said, according to Reuters.

"Obviously the government of that time, out of fear that German power might lead to complete victory, preferred to ally itself with Hitler's Germany rather than opposing it."

He said that the racial laws were indeed Mussolini's worst policies but that he did preside over major infrastructure and welfare programs.

Mussolini passed a number of anti-Jewish laws in 1938 after pressure from Hitler, whose side Italy took during the Second World War, said the Guardian.

Berlusconi is currently campaigning for next month's elections.

If he wins, he will head a coalition that includes far-right political leaders with ties to Mussolini's fascist regime.

GlobalPost's senior correspondent Paul Ames reports that Berlusconi's comments have provoked a wave of indignation at home and abroad.

"They ... are devoid of moral sense and historical foundation," said Renzo Gattegna, President of the Council of Italian Jewish Communities. "Italy still has much work, beyond the level of rhetorical comments at events, to seriously relate with its own history and its own responsibility."

Pier Luigi Bersani, the center-left leader who is the poll frontrunner ahead of the Feb. 24-25 election, called Berlusconi's comments "indecent."

"This is a day that should make us reflect on how humanity can fall into such an abyss. Berlusconi has used it as an electoral manoeuvre, to win a few votes from the Fascist right," Bersani said.

In France, the left-leaning newspaper Liberation asked how the European People's Party which groups center-right parties from across Europe — including Angela Merkel's Christian Democratic Union in Germany and the People's Party of Spanish Prime Minister Mariano Rajoy — can allow Berlusconi's People of Freedom party to remain a member.

"In the 'Resistible rise of Silvio B' that has reduced Italy to ruin, not only economically and institutionally, but also morally and culturally, the European People's Party is not free of responsibility," the paper said. The editorial references Bertolt Brecht's 1941 play the "Resistible Rise of Arturo Ui" about Hitler's rise to power.

Berlusconi later issued a statement saying that he condemned fascism and regretted not better articulating his remarks.

However, GlobalPost's Ames points out that Berlusconi is a canny election campaigner and he may have tapped into nostalgia for Hitler's wartime ally among Italian voters increasingly discontent with the economic recession and rising unemployment.

Calendars and other souvenirs bearing the dictator's image are commonplace in stores in much of Italy and it's easy to hear praise for Mussolini along he-made-the-trains-run-on-time lines.

During his previous terms in power, Berlusconi appointed former neo-Fascists and Mussolini apologists to ministerial posts. Politicians from the Berlusconi-allied Northern League party have used language against immigrants and minorities that would only come from fringe parties in most other European nations.

Fascism and racism have long been common among hardcore sections of fans of some of Italy's leading soccer teams, but the problem seems to be worsening, Ames reports.

At a match in November, fans of the Rome club Lazio bellowed anti-Semitic chants during a game against London's Tottenham Hotspur, a club followed by many Jewish fans. Several Tottenham supporters were attacked in the Italian capital by a mob shouting "jews, jews."