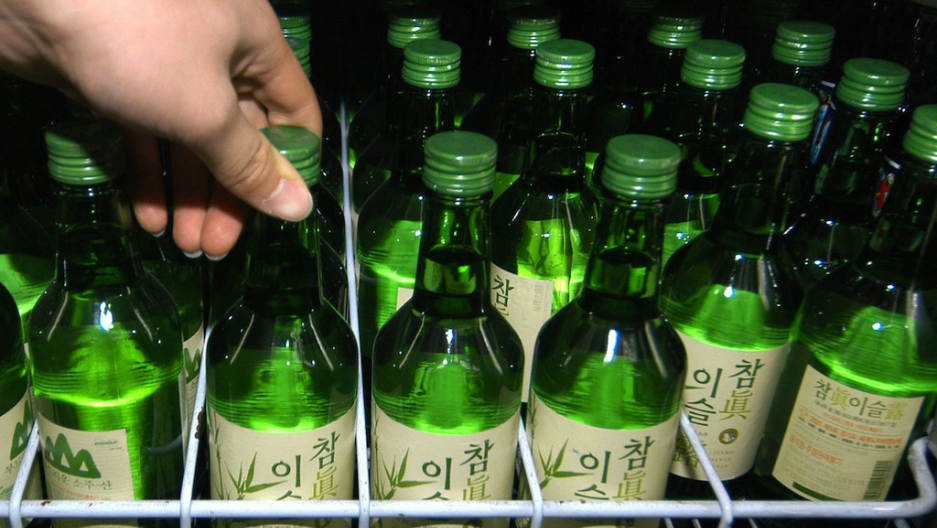 A South Korean shopper holds a Jinro liquor bottle at a convenience store in Seoul, 15 February 2005. South Korean beverage companies and foreign firms jumped into the race to acquire Jinro, one of the country's most famous brands and the market leader for soju, the most popular alcoholic drink here.
Credit: Park Ji-Ho
Share

The traditional clear rice liquor is served at most restaurants and bars, and goes for about $2.80.

That is, it did until the beginning of this year, when distillers raised the cost to about $3.75, reportedly as a reaction to the skyrocketing cost of ingredients, KoreaBang reported.

GlobalPost Senior Correspondent in Seoul Geoffrey Cain said soju is a staple of Korean cuisine, a grain and rice alcohol often likened to vodka. Price inflation in South Korea has been pretty bad over the last three years, he said, but now that it's hitting soju prices, Koreans are getting irate.

"One Korean friend exclaimed to me today that he's worried that the relatively low wages here will prevent he and his friends from going out after work for a few bottles of soju and barbecue, a tradition of bonding among peers," he said.

Cain said soju is so prevalent and cheap in South Korea that alcoholism is a serious problem.

"So, on the other hand, rising prices could push Koreans to forgo a bottle or two," he said.

The World Health Organization reports that, in 2007, per capita consumption of alcohol in South Korea was 14.8 liters of pure alcohol, compared to 9.4 in the United States and eight in Japan.

According to About.com, Soju today is more complicated than just rice, and is made with (and thus subject to the prices of) wheat, barley, tapioca, or sweet potato.

While "members of the older generation" are fans or the older style of soju, the milder, newer soju varieties have gained popularity.

Either way, the increase in price has South Koreans of all age groups crying foul, accusing restaurant owners of being greedy and the Lee Myung Bak government of being incompetent, according to KoreaBang.

Sounds like everyone could use a drink. There's always wine, which outpaced soju in sales for the first time last December, according to China Wines Information website.

More from GlobalPost: Liquid status on the Korean peninsula