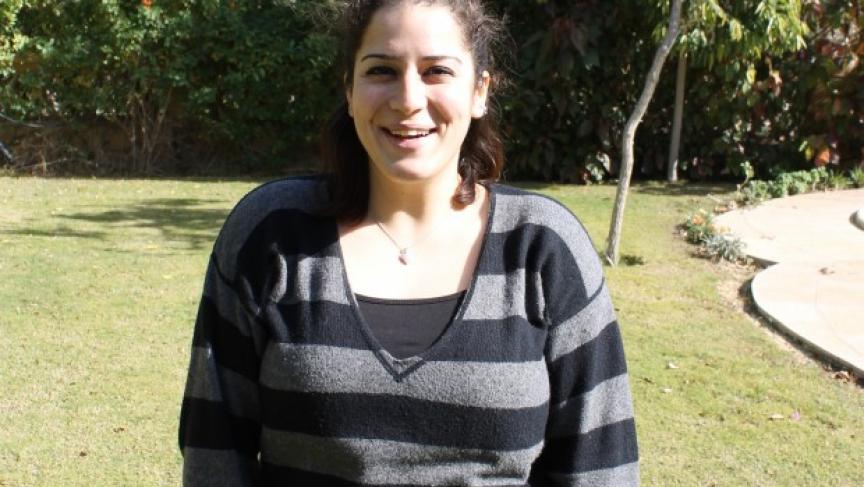 Hafsa Halawa at her home in a Cairo suburb. (Photo: Noel King)

Share
Friday marks the second anniversary of the start of Egypt's revolution, which began as a series of mass demonstrations and ended with the resignation of President Hosni Mubarak. In the aftermath of the uprising, many young Egyptians were eager to help their country's transition to democracy. Two years later, people like Hafsa Halawa are realizing how difficult that transition can be. While making coffee for a visitor with her gleaming new espresso machine, the 26-year-old admits she's not your typical young Egyptian. She grew up in England, and now lives back with her family in a wealthy, gated community outside of Cairo. She wasn't in Egypt for the revolution; she was attending grad school in the UK. "My revolution," she joked, "was on the phone with my parents here, freaking out about them and going to the Egyptian embassy in Britain." Armed with a newly-minted law degree, Halawa moved to Cairo a few months after the revolution, excited to help the fledgling democracy. She joined an American non-governmental organization (NGO) called the National Democratic Institute, or NDI, helping Egyptian political parties prepare for the country's first free parliamentary elections in November 2011. "Everyone actually needed help with the same problems. Even the old guard, when it was disbanded, regrouping in a post-revolution Egypt – it's been proven that it's a whole host of egos and lack of finance and lack of basic understanding. I always joke that this country's elites and it's poor are politically illiterate," she said. Because NDI was working with parties across the political spectrum, Halawa didn't think her work was particularly controversial. But just after the election, she found herself in the middle of a diplomatic firestorm. Egyptian security forces raided the offices of more than a dozen NGO's, including NDI. They seized equipment and accused employees of spying. At first, Halawa says, she didn't realize how serious the charges were until she was surrounded by security officers while at work. "They started berating me and heckling me and screaming at me that I had damaged this country, that I was helping the Jewish, Israeli spies, that I was a Zionist. They had my ID card, so they saw that I was Egyptian. So, they to me: 'are you not afraid for your country? Haven't you done enough to your country? Enough. Enough. Enough.' They kept screaming 'enough.'" The raid on the NGOs quickly became an international incident. Nineteen American citizens were charged. Secretary of State Hillary Clinton addressed the NGO crisis during a Senate hearing in February last year. "We are engaged in very intensive discussions with the Egyptian government about finding a solution," Clinton said. "We've had a lot of very tough conversations and I think we're moving toward a resolution." After the diplomatic push, Egyptian authorities agreed to let the Americans leave the country. But the Egyptians, including Halawa, are still on trial. The charges are simple: Because the NGOs were not properly registered to work in Egypt, the employees were essentially receiving illegal funds — in the form of their salaries. Halawa and her co-defendants are confined to a cage each time they appear in court. "It sort of has bars and it's all mesh, mesh, mesh, mesh," she said. "So not only can you not hear, because there are no microphones in court, you can't really see a lot either. You have to kind of have your face right up against the mesh cage to see." To maintain her sense of humor, Halawa tweets during trial with the hashtag "grumpy defendant." Egyptian political analyst Said Sadek said that Halawa's case is one illustration of the challenges facing post-revolution Egypt. The country is now a democracy, but authoritarian values have been ingrained after decades of dictatorship. "The regime does not allow such people to be challenging them, or exposing the corruption and human rights violations. So they are always being besieged by laws, by police system that even monitors Facebook, Skype, Twitter," Sadek said. Even so, Sadek — who teaches at the elite American University in Cairo — added that he's surprised by how many of his students are willing to follow in Halawa's footsteps. "I get many of the graduates who were not interested in politics contacting me these days and asking, 'What do I do? How can I join an NGO? How can I join a political party? What do I do exactly?'" The NGO trial has been postponed until March. In the meantime, Halawa is trying to move on with her life, but finding it difficult. "I'm angry," Halawa said, "because I've spent the last 13, 14 months now, unable to work. NGOs refuse to hire me because I am on trial and it would cause problems for them with state security, even the registered organizations. I've had five straight rejections because of the trial. From all kinds: private sector, law firms, NGO's and the answer is, 'after trial ends.'" Halawa said she doesn't think the revolution has failed. She still has faith that Egyptians – particularly young people – will help shepherd their country toward democracy. She just hopes the trial will finally end, so she can get back to helping them.