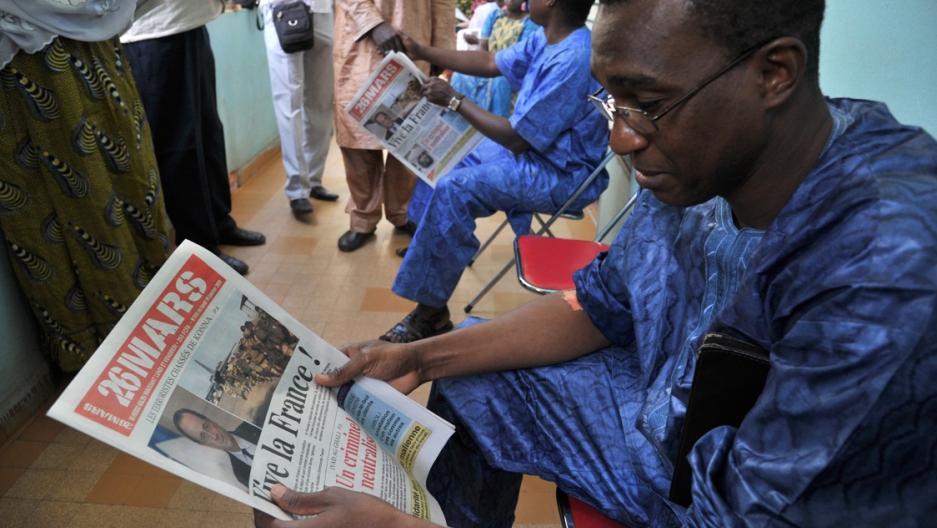 A Malian man reads a newspaper reading ''Long live France!'' as he waits to donate blood, on Jan. 14, 2013, in Bamako, Mali. France is in the middle of a military campaign in Mali to drive back advancing Islamist rebels.
Credit: Issouf Sanogo
Share

LONDON — On "BBC Question Time" last week, an angry audience member asked the panel why Britain should be sending military help to the French in Mali.

“I don’t remember the French coming to our aid when we went to the Falklands” he fumed to loud applause.

At the time, Britain’s commitment to the French-led Operation Serval in Mali consisted of two C-17 transport aircraft. Prime Minister David Cameron told parliament this week that while “not seeking” a combat role, Britain would commit “intelligence and counter-terrorism assets” thought to include special forces soldiers, aircraft and surveillance drones, to northern Mali. On Tuesday, The Times of London led with a front page story that British troops have been “put on alert for action” in Mali.

A decade after the occupations of Afghanistan and Iraq, public anxiety around British involvement in a potentially protracted military intervention against an ill-defined enemy in difficult terrain is understandable.

Concerns center not just on the dangers to service personnel and costs to the taxpayer, but on possible ulterior motives underlying the operation and potential unintended consequences that may be sparked in the region and beyond.

Indeed, last week’s hostage situation in Algeria is likely to be the first of many so-called reprisal attacks by Al Qaeda cells in the area. But while these concerns are legitimate, they should not detract from the importance of the current intervention in Mali.

Despite little media coverage, Al Qaeda-linked Islamist groups have been consolidating and extending their grip across northern Mali for several months. Jihadist fighters have reportedly been crossing Mali’s porous borders as well. Malians describe these incursions as having come from as far afield as Yemen, Somalia and Afghanistan. A new terrorist haven was being created in plain view, one whose chief exports would have been organized crime and global terror.

So long as they stayed deep in the desert controlling the principle cities of the north — Timbuktu, Gao and Kidal — the Islamists were going to be difficult to confront. An African-led force authorized by the UN was not due to be deployed until September.

It is unlikely that a diplomatic settlement could be negotiated with these groups — groups for whom the establishment of an independent Islamic state is non-negotiable. Not surprisingly, many were predicting that Mali might become the new Afghanistan.

But the Islamist offensive launched early this month toward the Malian capital, Bamako, presented an unforeseen opportunity. Not expecting a swift international response, the Islamists left their strongholds in the desert lightly defended in order to push south. By swiftly deploying a formidable intervention force, the French and Malian army appear to have not only stemmed the Islamists advance but also forced it into retreat.

The area of combat covers a vast region. Intelligence from surveillance drones and satellites have enabled the French to deploy their jets and attack helicopters successfully. Additionally, Franco-Malian ground forces have been augmented as troops from neighboring countries are deployed. Nearly one-sixth of the 5,800 African troops expected in Mali have already arrived. Together with 2,500 French soldiers, the size of the multinational force in Mali will far exceed the UN's anticipation from last December.

Material and logistical support are coming not just from Britain but also from the US, Germany, Denmark, Belgium, Canada, Italy and Spain. The Tuareg Separatist Movement and the Azawad National Liberation Movement have announced the willingness to join international efforts to fight the Islamists. With neighboring countries such as Algeria closing their borders and opening their airspace for surveillance and aircraft, the hope is that Islamists in Mali can be destroyed rather than pushed into another ungoverned space in the Sahara.

As the former colonial power with interests in the region’s resources, France’s role in the current intervention is far from neutral — but framing Operation Serval as a “war for resources” is misleading. Still, it is clear that France and other Western powers are keenly aware of the potential impact Al Qaeda’s growing presence in Mali could have on resource exploitation across the region.

Last Friday, Cameron drew an unfortunate parallel when speaking about the need to tackle Islamists in the Sahel.

"I would very much caution against anyone who believes that if somehow we stayed out of Iraq and just said this has got nothing to do with us, that would somehow make us safer,” he said.

Rather than comparing it with Iraq, the military operation in Mali needs to be recognized for what it is: A multinational UN-mandated counter offensive against well-armed Islamic fighters.

The retaking of the north will not be easy, nor will the creation of enduring stability in Mali, but the struggle is a necessary one. Through international action a protracted war could be avoided, a failing state would be bolstered and a major blow might be dealt to Al Qaeda-linked groups on the African continent.

Stefan Simanowitz is a journalist and political analyst based in London. He has reported from across the continent and spent time in the deserts of Mali and Algeria.