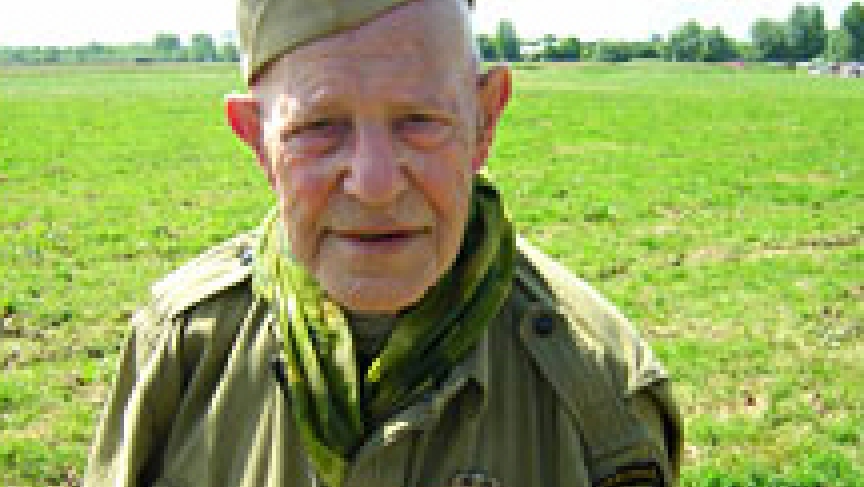 Being part-Choctaw Indian, McNiece had an idea how to psyche up his squad for their first combat mission: D-Day.

"When we got ready to jump into Normandy, all of us had scalplocks, we also had our faces painted. It started a fad that is carried on today throughout most airborne units," he said.

The scene was caught on camera: Jake and his buddies beside their plane, with their mohawks, daubing each other with warpaint.

But in fact, another of Jake's band of brothers survived the battle.

As a producer for The World, I tracked both men down and arranged their reunion, on the anniversary of D-Day in 2002.

"I didn't know. I thought Robert was dead, all this time till yesterday when his son called," said Jake in the 2002 interview.

Jake McNiece was not what you call a conventional soldier.

He and his men didn't believe in doing anything that didn't involve killing the enemy, or preparing to kill the enemy.

"We had no respect or discipline to show to officers or really any of the regulations. We were really just a damn good bunch of soldiers."

His squad of misfits was nicknamed the Filthy Thirteen; the inspiration for the movie the Dirty Dozen.

But Jake says they weren't felons like those in the movie.

"Well, we often went AWOL. We were called the Filthy Thirteen. We never took care of our barracks or any other thing, or sanitation, and we were always restricted to camp. But we went AWOL every weekend that we wanted to and we stayed as long as we wanted till we returned back, because we knew they needed us badly for combat. And it would just be a few days in the brig. We stole jeeps. We stole trains. We blew up barracks. We blew down trees. We stole the colonel's whiskey and things like that."

McNiece's ability to lead, and inspire, led him to get promoted frequently.

But just as frequently he was busted down to buck private.

He and his men were demolition saboteurs, attached to the 3rd battalion of the 5-0-6th Parachute infantry for D-Day.

"It was truly a suicide mission. I lost most of my men in the first two hours."

His comrade, Bob Cone, got separated from the group as soon as he left the plane.

Bob was reported dead, and for almost 60 years he did not seek out his former comrades.

In some way he felt he'd let them down.

But Bob and Jake's friendship was renewed that day in 2002.

Shortly after, I received this message from a friend of the Cone family:

"Just to let you know Bob has had a funeral with full military honors due, in part, to what you did for him. That interview started the ball rolling. His son said it was the best thing that happened to his Dad in his last years. He had a whale of a time with his old army buddies. Thought you might like to know."

I did. It was the best day's work I've ever done.

This was how I found them.

In 2002, my ex-wife was a dating a guy who's father, she thought I might like to know, was part of the Filthy Thirteen, the inspiration for the movie, The Dirty Dozen; a bunch of convicts sent on a suicide mission on D-Day.

Let me tell you, I was pretty skeptical.

I'd met with plenty of veterans, and knew there were two kinds.

Those who say nothing, and those who — well — might make up all kinds of stories.

So I started digging.

I spoke with Bob and his family to get as much information as possible and tried to verify it with the airborne forces museum.

Then I stumbled across an Oklahoma newspaper article about vets commenting on the movie, "Saving Private Ryan," including one Jake McNiece, who mentioned the whole "Filthy Thirteen" thing.

After lots of cross-checking, I found a number for Jake in Ponca City, Oklahoma, and gave it to Bob's family.

They called, made the connection, and the next day both men spoke to The World.

The exact anniversary of D-Day.

* EDITOR'S NOTE: At the time of broadcast we were not aware that another member of the Filthy Thirteem, Jack Womer, was still living. Sadly he too passed away on December 28th 2013.